Melissa Hernandez Retires and other news
Written by: David A. Avila 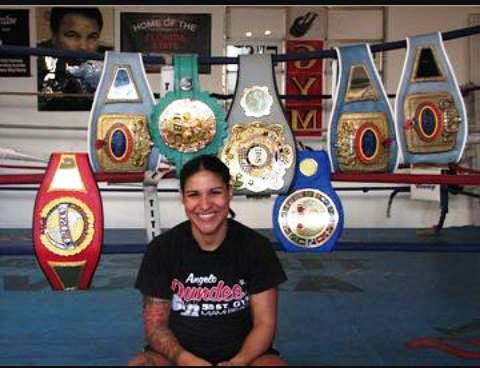 One of the Best, Melissa Hernandez Retires and other female fight news

Those who really know the sport of professional boxing have long recognized Puerto Rico’s Melissa Hernandez as one of the best.

Last week, before her fourth encounter with Layla McCarter, the fighter known as “Huracan” Hernandez announced it would be her last venture into the boxing ring after 11 years as a professional. She announced her retirement from boxing.

“I got started at Webster PAL in The Bronx. I started because I was fat and very depressed so I needed an outlet. What I liked about it was that it was a one man show, meaning you had to do everything yourself even though you have a coach, it’s a sport where you are all you have,” explains Hernandez about why she chose boxing. “No one to blame but yourself for any short comings. Then, you have yourself to be happy with cause you pushed yourself. Though people help along the way, it’s just you that gets the actual job done.”

And what a job she accomplished.

Though not the tallest fighter she captured world titles as a super bantamweight, featherweight, lightweight and super lightweight. And she has been fearless in accepting contests with the best female prizefighters in the world in their own hometowns.

“Because since my first fight in the amateurs I had to fight the best. I never had it easy so that set the path for the rest of my career,” she says.

But there are a few she would she could have fought.

“I wanted to fight Holly Holm, Lucia Rijker, Christy Martin, and Cecelia Braekhus,” said Hernandez, adding that if an opportunity to fight Braekhus came she might consider coming out of retirement.

During her adventures Hernandez fought overseas against many talented female fighters including Canada, Panama, Australia and Argentina.

“Argentina is strong for female boxing I loved being over there. They treated me with the respect a fighter is supposed to get. The talent there is mixed. I fought two of the best.  I came out losing both times but felt I only lost one to Marcela Acuña. She’s a great fighter. The other Ericka Faris is good but wasn’t better than me. I out boxed and out foxed her but sometimes when you fight in someone’s home you need to KO to get the W.  But women’s boxing there is a great place to be,” said Hernandez who always cuts straight to the truth.

Hernandez knows talent and fought the multi-talented McCarter four times in the boxing ring. Both are considered among the top five female fighters pound for pound and gathered world titles in multiple weight divisions as proof. Size doesn’t matter to either.

McCarter says she will miss Hernandez.

“Melissa has been one of the best for a long time,” said McCarter whose last loss came against Hernandez in 2007. “We were joking that I’m not going to be able to find someone to fight now that she is retiring.”

Hernandez is appreciative of McCarter’s acknowledgment. But she also realizes there is truth in the fact that others with world titles are not fighting the best.

“First, I want to thank Layla for saying that. It takes a real champion to notice another champion,” said Hernandez adding that her solution for female boxing is simple. “It can be fixed by not sanctioning fights with people who aren’t ranked. These females in the top ten should be fighting other top ten. It seems if you sell tickets you get a world title. That’s what needs to stop. Making fake champions. Even now, retired and old, I can still beat all these new jacks and there wanna be titles. World champion means you fight anyone and win. Not fights bums or sell tickets.”

That’s Hernandez. Shooting from the hip and taking no prisoners.

She will absolutely be missed in women’s boxing.

Erica Farias (22-1) defends the WBC super lightweight title against Victoria Bustos (15-3) on Saturday July 30. The 10-round bout takes place in Rosario, Argentina. Farias, 32, is making the second world title defense. Bustos, 27, who fights out of Rosario will be fighting in her hometown in attempting to wrest the title from Farias.

In Barranquilla, a flyweight contest resulted in Olga Julio (23-16-1) defeating Neisi Torres (13-5-1) by unanimous decision after eight rounds on Saturday July 23. It was 30-year-old Julio’s fifth consecutive win. She lives and trains in Barranquilla. Torres, 22, also is from the same city.

Angelique Duchemin (11-0) clashes with Erika Kalderas (11-5) in a super featherweight contest set for six rounds on Saturday July 30. The bout takes place in Le Cannet, France. Duchemin, 25, fights out of nearby Thuir, France. Kalderas, 22, fights out of Hungary as is trying to snap a five-fight losing streak.

In Berlin, a super lightweight match saw Milena Koleva (8-6-1) defeat Lela Terashvili (6-3-1) by decision after six rounds on a Saturday July 23. In another bout, Nina Meinke 2-0) won by decision over Zsofia Bedo (17-38-1) after four rounds.

In the city of Budapest, a bantamweight clash saw Renata Domsodi (15-10) win the WBF world title by decision over Gabriella Mezei (7-6-2) after 10 rounds on Sunday July 24. Domsodi,

In Valenza-Po, a flyweight contest saw Ilaria Scopece (3-0) win by technical knockout over Andrea Lakatos (1-11) in the second round after the referee stopped the fight. Scopece, 31, fights out of Corsico, Italy, It was her first win by knockout. Lakatos, 32, fights out of Hungary.

In Osaka, a super bantamweight clash saw Tomoko Okuda (2-1) defeat Miki Matsuda (1-1) by majority decision after four rounds on Tuesday July 20. Okuda, 33, is a southpaw who fights out of Sakai, Japan. Matsuda, 24, fights out of Himeji, Japan.

In Cancun, a flyweight world title clash saw Jessica “Kika” Chavez (27-4-3, 4 Kos) retain the WBC flyweight belt by majority decision against Esmeralda “La Joya” Moreno (33-9-1) after 10 fierce rounds. Chavez, 28, avenged a loss she endured five years ago to Moreno. This time she was able to squeak by. Moreno, 29, has the IBO, WIBF and GBU super flyweight world titles but dropped down a weight division to challenge Chavez. The title fight took place on Saturday July 23. In a companion flyweight bout, Ana Arrazola (25-11-3) and Elizabeth Lopez (2-1-2) fought to a draw after four rounds.

Karen Acosta (2-0-1) meets Marisol Corona (5-2) in a six round super featherweight bout on Tuesday July 26. The match is set for six rounds and takes place in Monterrey, Mexico.

Sulem Urbina makes her pro debut after a sterling amateur career against Eloisa Martinez (1-3-1) in a flyweight match set for four rounds. The fight takes place on Saturday July 30 at the Auditorio Municipal in Tijuana, Mexico. Urbina is 26 and fights out of Phoenix, Arizona. She recently signed with Zanfer Promotions.

In Valencia, a bantamweight clash resulted in Eva Naranjo (6-0) remaining undefeated with a close split decision victory over Maribel De Sousa (1-8) after six rounds on Saturday July 23. Naranjo, 38, fights out of Valencia. In another female bout, Katharina Thanderz (2-0) defeated Jessica Sanchez (0-2) by decision after four rounds of a super featherweight contest.

In Merthyr Tydfil, Wales, a bantamweight clash saw Ashley Brace (4-0) remain undefeated with a technical knockout in the fifth round over Claudia Ferenczi (11-53-6). The match took place on Saturday July 23. Brace, 25, fights out of Ebbw Vale, Wales. Ferenczy though only 23 already has 71 pro bouts. She fights out of Slovakia.

In Mashantucket, Conn. a super bantamweight clash saw Shelly Vincent (18-0) remain undefeated after eight rounds with a majority decision win over Christine Ruiz (7-9-3) on Thursday July 21. Vincent, 37, fights out of Providence, Rhode Island.  Ruiz, 30, who fights out of San Antonio, Texas, suffered her fourth loss in a row. She had lost to Vincent three months ago.