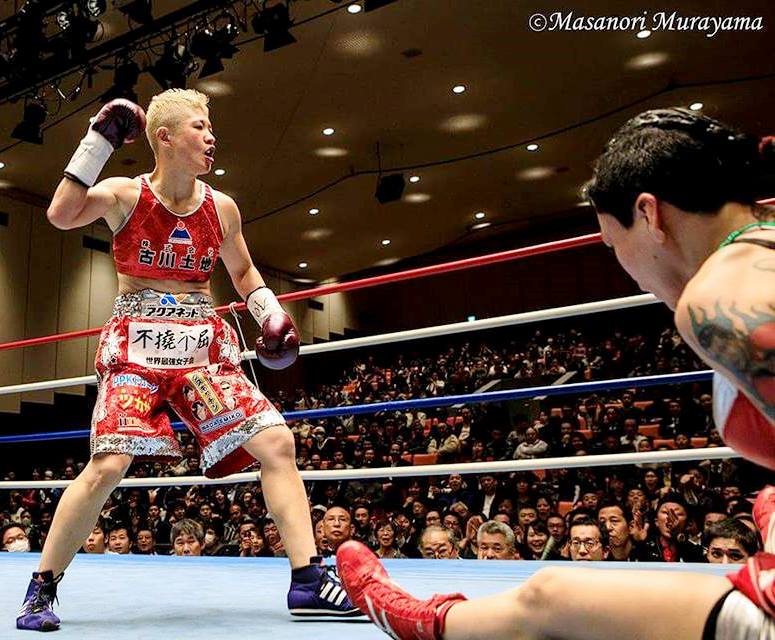 TOKYO-Adding a new achievement in Japanese boxing history, Naoko Fujioka captured her fourth world title on Monday with a technical knockout victory over number contender Isabel Millan of Mexico at 21 seconds into the final round of the bout for the vacant WBA flyweight championship.

“I am very happy to win the belt. Just win, this time. A four division titlist is just part of the road but an indispensable one to realize my dream to be the first ever female champion in five divisions. I am just happy,” said Fujioka (16-2, 7 Kos) who looked so relieved with her new belt on her waist.

Although it was a comeback fight for Fujioka after the loss against WBC flyweight champion Jessica Chavez in Mexico five months ago, the former three-time champ of major organizations was expected to overwhelm and finish Millan (18-3-1, 8 Kos) who has the minor WBF flyweight title in the early rounds. But it did not come out that easy.

Fujioka, rated number two by the WBA, went forward aggressively to get inside of the three inches taller opponent from the opening bell.

Millan tried to keep distance with her jab and to attack with long swings from both hands anytime the Japanese got close. As Fujioka worked inside of Millan’s long arms and its unfamiliar rhythm, she found the chance to connect to the chin with a left hook and knocked her down in the second round. It seemed a damaging knockdown, but the Mexican who was traveling to Asia for the first time, showed real toughness and continued on until the final round.

The Mexican challenger Millan avoided further clean hits to the body and face by Fujioka and landed a left uppercut and right hook as Fujioka threw a big right. Even though the whole fight was scored one-sided to the Japanese great, the Mexican’s determination and endurance were very impressive.

Fujioka continued lashing out at the opponent along the ropes and the blows made her face swell badly as the rounds went by. Millan’s camp told the press afterward that she continued fighting against her manager’s advice to give up. But at 21 seconds of the 10th and final round, the referee Takeshi Shimakawa finally could not help stopping the fierce battle when Fujioka’s strong and clear right straight caught the top contender flush.

“It turned out to be a truly difficult fight for me. I saw Naoko was a great champion to take this fight. I lost it, but I am proud of myself,” Millan confidently said after the fight.

Fujioka was a gracious winner.

“She (Millan) was an unbelievably tough one. Her words she said at the weigh in were true totally. She came all the way from home to become a WBA champion. It was somewhat hard to deal with her long arms and solid fists. They were slow, but I had to be very careful of her big punches. I am glad that I got a knock down of this quality opponent”, said the winner Fujioka describing the triumph.

In March, six years ago, the worst combined disaster of earthquake and tsunami hurt Fujioka’s hometown, then two months later, she dedicated her first world title WBC strawweight title to the victims after forcing Anabel Ortiz to retire in the eighth round. She then snatched the WBA super flyweight belt from Naoko Yamaguchi in 2013. She also won the vacant WBO bantamweight title with a unanimous decision over Hee Jung Yuh of Korea in 2015. But only the 112 pound division of flyweights was an unlucky division for the brave explorer. She lost to WBA champion Susi Kentikian in Germany in 2014, and to WBC titlist Chavez last year. This time a Japanese proverb “The third time pays for all” came true.

“The more I failed, the more I hungered for the flyweight championship. What’s more, I believed it must be the best weight for my size. I am happy to prove it is not impossible.”

Fujioka becomes the first Japanese fighter regardless of gender to conquer major titles of four different weight divisions. And the second female in the world after Alejandra Oliveras of Argentina who has the WBC/WBA super bantamweight, WBA lightweight, WBO featherweight, and WBC super lightweight titles.

The 41-year-old very active champion is a gifted athlete of course, but her ceaseless efforts to develop physical condition cannot be overlooked. She believes in staying busy and often sees the experts of neuron coordination training, Pilates and sports nutrition. She also keeps busy as a mentor and encourages younger comrades. Their respect for her is so strong they traveled many miles to Korakuen Hall to cheer their leader. More than 1500 attended the world title event, almost a full house.

“Today I believe that I showed there’s a possibility to become the first female five division champion. My next target will be any champion of light flyweights. But I care how I fight. Against any champion of quality, with a battle of quality, I want it to come true. I want to make my dream come true and to prove female fighters can entertain people at the same time. Thank God I am totally fine, both mentally and physically. Let’s say I have just understood how to use my body very well at this age. Still I am learning. I want to see how further I can go this way.”