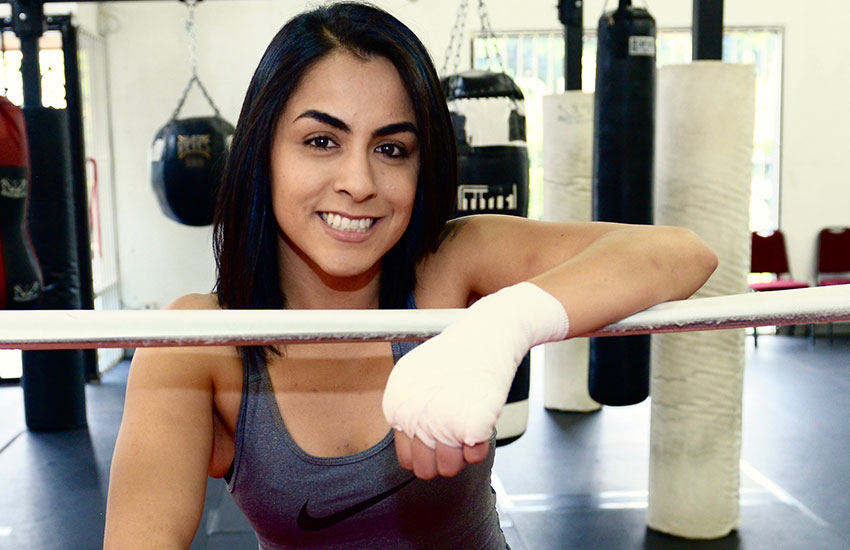 “Diamond Girl” Fighting Against The Odds

If you are familiar with Southern California female boxing then you know Amaris “Diamond Girl” Quintana (11-3-2, 3KO).

Known for her relentless come-forward style, more than likely you have gotten out of your seat to cheer on the 28-year-old as she went toe-to-toe against some of the best fighters of her division and above in her now nine-year professional career.

Having survived a medical scare that kept her out of the ring for the better part of two years, she has now come back with a vengeance in 2018 and is in her third fight of the year so far this Saturday night against the experienced Aracely Palacios (10-9, 2KO) in Tijuana, Mexico.

Like many other female fighters Quintana strapped on the gloves following her older brother into the gym at 13.  Her parents, not big fans of her opting to get punched in the face, didn’t like the fact she was taking on the sport but once they saw her passion, became her biggest fans.

“I started training at 13 and was able to start competing at 15,” the attractive Quintana said in an exclusive interview for ThePrizeFighters.com.  “It was hard, my parents didn’t want me to do it at first, they said I would get hit and get hurt and then get scared.”

She kept on fighting and did 13 amateur fights before going pro against Gloria Salas in 2009 when she was 19 years old.  “I was really anxious because I knew about the smaller gloves and the no head gear.  I was anxious but as soon as the bell rang and as soon as I felt a punch, my adrenaline kicked in and I realized was I was in the ring.  It’s a passion, a love I have for it. Once I get up in the ring and we get the first hit in, it gets me started.”

Quintana and Salas met three times in the ring in a span of a year with the San Diego native winning all three, fights that Quintana remembers fondly.

“Every time we got in the ring it was a war,” she said with an audible smile.  “We would go toe-to-toe every single round.  A warrior, great experience to have fought her.”

Quintana strung together six wins and two draws that came against future champion Melissa McMorrow before tasting her back-to-back losses in 2012 and 2013 against Sindy Amador.  The second one was for the vacant IFBA light flyweight title.

“Another great warrior, she fought with a lot of heart, a tough opponent,” Quintana shared.  “It didn’t him me hard, I knew I did all I could, I didn’t lose bad.  For me and a lot of people it was a close fight.  I went back to the gym and worked harder.   It wasn’t a loss that brought me down or made me think less of myself.  It helped me to see that there is more that I need to improve.”

Like many female fighters through out the sport, Quintana’s career has been a sporadic one with long stretches without a fight, not because she is not willing but without the backing of a major promoter, she says it is difficult to secure the fights.

“Its tough for women,” she says with agony in her voice.  “I’ve had to fight a couple of the fighters more than once or twice.  Having to work full-time and fight, it is not easy.  Your body takes a lot of beat downs.  Sometimes my body needs a break but it is not to stop completely and it is hard to find fights too.”

Quintana had to take the longest break of her career, not because she chose too but because after an emergency trip to the hospital for stomach pains, an x-ray found something much more serious.

“They found a ruptured cyst in my ovaries,” she said matter-of-factly.  A cyst is a membranous sac or cavity of abnormal character containing fluid.  “They also found a lump in my chest.  Of course you get a call from the doctor with that news and you automatically think cancer.  They advised me to stop training.”

After a series of doctor appointments it was discovered it was a cyst in her chest the size of a softball and the doctor considered her lucky it didn’t burst as a result of a punch.  Quintana had to stop boxing immediately but her career according to her doctor was never in jeopardy.

Her recovery was long and tedious since they had to collapse one of her lungs to get to the cyst. It caused a need that included restoring her respiratory system to fighting capacity.

In her nine-year career Quintana has gone thru a series of trainers looking for just the right fit and she thinks she has found it in Juan Estrada who also trains former world champion Antonio Margarito in his recent return to the ring.

“I wouldn’t see any benefits or me improving my skills,” she explained regarding the changes in her corner.  “Its not like I wanted to change but I had to find what worked best for me.  What I thought would help me grow more and expand my skills.  I am happy with Juan Estrada.  He hasn’t changed my style but he has taught me how to be smart, how to use my head more.”

“I’m still the aggressive fighter I have always been,” she continued.  “With him I am working more of my footwork, my speed and my technique.”

Quintana feels she has improved. Since her return this year, after her medical scare, two impressive wins over Dulce Galaviz in March and Carol Castro Madrid in April have resulted and both by stoppage. Knockouts were something were a rarity before for the San Diego fighter.

“He has helped me work on my power also,” Quintana said of Estrada.  “Something I have never worked before and I have been feeling stronger.  You could see it in my last two recent fights, my power and my technique has been getting a lot better.”

After fighting mostly in San Diego, Quintana has now ventured south of the border to Tijuana looking to capture that audience as she has in her hometown with her popular style.  The fight this Saturday night against Palacios is her third in a row in the border city.

“I love fighting in Mexico because I am Mexican and I have family there,” she says.  “I would like to fight in the States also and that is something we are shooting for.”

Last year Palacios of Durango, Mexico, faced off against two out three of the female fighters signed under the Golden Boy Promotions banner, Seniesa Estrada and Marlen Esparza. Both went the distance against the experienced Mexican fighter and Quintana is looking to make a statement in the scheduled 105-pound six round fight.

“She is a fighter that comes forward and likes to go toe-toe-toe also,” Quintana explained.  “We are working on starting off with my boxing skills a bit, testing to see what she has and hopefully stop her.”

As a career strawweight, the “Diamond Girl” has her sights set on the biggest name in the division, WBA champion Anabel “Avispa” Ortiz of Mexico City.  “It’s a fight that I have been looking forward for.  Sooner or later it is going to happen.  Seeing where it takes us after this fight, after this fight we’ll see what is going to happen, what is offered and see where it goes.”

At 28, Quintana has been a pro for nine years but she says she has at least half a decade more in the ring.  “In these five or six years I want to stay busy, stay on it, and keep going at it and shoot back to the top.”

She is well on her way.

To listen to the complete interview, please visit www.BlogTalkRadio.com/2MinRound