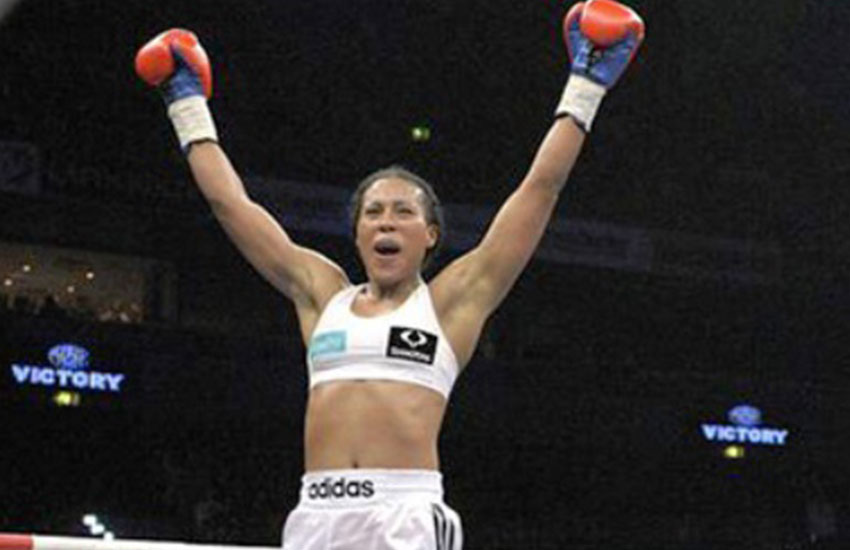 Considered one of the three best female fighters in the world Cecilia “The First Lady” Braekhus walked into a Russian arena and proved superior against Inna Sagaydakovskaya (7-1, 3 KOs) in winning by unanimous decision.

Braekhus (34-0, 9 KOs) walked away with a firm grip on the WBA, WBC, WBO, and IBF welterweight titles on Saturday July 21, in Moscow. It was a return to normalcy for the Norwegian prizefighter who has never known defeat.

Until last May, she had never been floored and when Kali Reis deposited the talented Braekhus to the mat with a counter right cross, it opened the eyes for many. Until that moment many fans thought she was virtually untouchable. But pro boxing is a funny thing. No one is untouchable. It’s just a matter of time.

When Braekhus walked into the Olimpiysky Arena against the undefeated Sagaydakovskaya – a fighter of many awards as an amateur – a few whispered an upset was attainable.

Braekhus, 36, dispelled those thoughts quickly with her superior athleticism that separates her from any other female fighter in the world. Speed, agility and a lethal right cross are her most potent weapons and they’ve enabled her to remain undefeated for 11 years.

Time and the American fighting style are obstacles that remain for Braekhus to conquer.

Reis, Claressa Shields, and Layla McCarter are the Americans that remain dangerous potholes for the Norwegian fighter with the model looks. Especially McCarter, who many including this web site view as the best female fighter pound for pound. Another fighter mentioned is Cris Cyborg but she’s an MMA fighter and that’s another matter.

For the last couple of years former American heavyweight contender Jonathan Banks has been training the Norwegian boxer and a change in fighting style has emerged. Quickly, Braekhus is adapting to the more aggressive and knockout-oriented American form. European female fighters prefer the jab and move style where inside fighting is a no-no.

Against the Russian fighter, Braekhus was able to combine her athleticism with her new layers of American fighting skills. It was too much for Sagaydakovskaya to overcome. The judges scored the fight 98-92 twice and 97-93 for Braekhus.

“I’m very happy with my performance,” Braekhus said. “I did what I wanted to do in the ring and what we worked on in camp.”

Any time a fighter wins in another country that’s a true victory indeed.

“I’ve been treated very well here in Moscow, and it was a pleasure fighting here,” said Braekhus.

Will she be lucky a second time when she fights in America?

No doubt Taylor (9-0, 4 KOs) has above average athleticism and years of Olympic style boxing experience. However, that’s not the same as pro experience especially when the other girls are coming back at you with power shots.

Taylor’s last experience against American fighters saw her staggered when Jessica McCaskill connected with a left hook bomb. One punch can truly change the complexion of a prize fight and the Chicago-based fighter proved that.

Connor (13-3-2, 5 KOs) who fights out of Arkansas, doesn’t have the same power as her fellow American. But she does have experience against world champions. Connor lost to Argentina’s Victoria Bustos who Taylor recently defeated and another was a knockout loss to heavy-hitting Amanda Serrano.

It’s a good match for Taylor to slowly learn the American fighting style. After Connor the Irish fighter will be matched against Cindy Serrano the older sister of Amanda. That fight is scheduled for October.

So far Taylor has been fighting against opposition that have all been long shots. It’s the primary reason that we do not rank Taylor on our list of best pound for pound fighters. Until she fights someone who is a risk, say Delfine Persoon, Amanda Serrano, Layla McCarter, or Melissa St. Vil, the talented Taylor has not been tested. Sorry British and Irish fans but Taylor has to fight someone that is truly a test.

On Friday July 27, super bantamweights Iara Cortes (4-2) and Adriana Maldonado (1-9-2) meet in a six round fight at Quilmes, Buenos Aires.

On Friday July 27, super welterweights Sarah Dwyer (2-4-1) and Donna Sadler (0-1) meet in a four round bout at Metro City, Northbridge.

On Saturday July 28, super welterweights Aimee Addis (4-0) and Deanha Hobbs (6-0) meet in a eight round contest for the Australia title at Newstead.

Marie Eve Dicaire (13-0) was the winner by decision after 10 rounds versus Alejandra Ayala (8-4) on Friday July 20. The super welterweight fight was held in Laval, Quebec.

On Saturday July 28, super featherweights Sandy Tsagouris (16-2) and Guadalupe Solis (5-1) meet in a eight round fight for the WIBA title at Brampton, Ontario.

On Saturday July 28, lightweights Estelle Mossely (0-0) and Aleksandra Vujovic (4-6-1) meet in a six round fight at Deauville, Calvados.

Wakako Fujiwara (6-2-2) was the winner by decision after eight rounds versus Kimika Miyoshi (13-11-1) on Monday July 23. Fujiwara, 37, wins the vacant OPBF featherweight title and took place in Tokyo. Also, Kikuno Shinomiya (2-0) knocked out Ageha Android (0-2) in the second round of a minimum weight fight.

On Sunday July 29, light flyweights Tenkai Tsunami (25-12) and Gretchen Abaniel (18-9) meet in a 10 round bout for the WBO world title at Ginowan, Okinawa.

Amaris Quintana (12-3-2, 4 KOs) won by technical knockout at the end of the second round when Luz Elena Martinez (5-1, 3 KOs) to win the vacant WBC Intercontinental mini-flyweight title on Saturday July 21. The mini-flyweight fight took place in Tijuana. It was Quintana’s third consecutive win by knockout. Quintana, 28, fights out of San Diego, Calif.

Welterweight world champion Cecilia Braekhus (34-0, 9 KOs) convincingly defeated Russia’s Inna Sagaydakovskaya (7-1, 3 KOs) by unanimous decision after 10 rounds at Moscow. Braekhus, 36, retains the WBC, WBA, WBO, IBF and IBO welterweight world titles. It was the Russian fighter’s first world title attempt. Braekhus recently fought in Los Angeles where she defeated Kali Reis by decision despite being knocked down for the first time in her career. Braekhus was in complete control in her fight against the Russian prizefighter.

Sharadene Fortuin (10-1-1) and Asandiswa Nxokwana (6-2-2) fought to a draw after 10 rounds on Sunday July 22. The bantamweight fight for the IBO Inter-Continental title took place in Umtata, Eastern Cape.

On Sunday July 29, super lightweights Gulsum Tatar (3-0) and Marina Popova (5-2) meet in a 10 round fight for WBF title at Alanya.

Rachel Ball (4-0) was the winner by decision after six rounds against Eftychia Kathopouli (1-1) on Friday July 20. The featherweight fight took place in Walsall, Midlands, England. Also, Danielle Hodges (1-0) beat Teodora Hristova (2-7-1) by decision after a four round flyweight bout.

Ireland’s Katie Taylor (9-0) defends the WBA and IBF lightweight world titles against American Kimberly Connor (13-3-2) in a 10 round fight at London, England on Saturday July 28.

Ava Knight (15-2-4) defeated Leesa Daniels (1-3) by decision after six rounds in a bantamweight fight on Saturday in Memphis, Tenn. Knight, 29, had not fought in more than two years.

Shelly Vincent (23-1) defeated Calixta Silgado (16-10-3) by majority decision after eight rounds in a featherweight fight on Saturday in Connecticut. Vincent, 39, won by scores of 78-74 twice and 76-76. Silgado, 30, fights out of Colombia and it was the second time they fought in a year. Vincent won the first fight by decision too.

Kailyn Hansen (1-2) got her first pro win after three attempts by decision after four rounds against Veronica Torres (1-1) on Friday July 20. The featherweight fight was held in Stockton, California.

On Friday July 27, super flyweights Cristina Fuentes (9-9-5) and Briana Gonzalez (3-1-1) meet in a six round fight at Laredo, Texas. Also, super lightweights Larizza Martinez (0-1) and Nina Gallegos (0-1) meet in a four round bout.

On Saturday July 28, light flyweights Lina Lincona (1-0) and Judit Hachbold (5-5) meet in a four round fight at Los Angeles, California.

On Saturday July 28, super featherweights Alycia Baumgardner (6-0) and Christina Linardatou (9-1) meet in a eight round fight at Louisville, Kentucky.