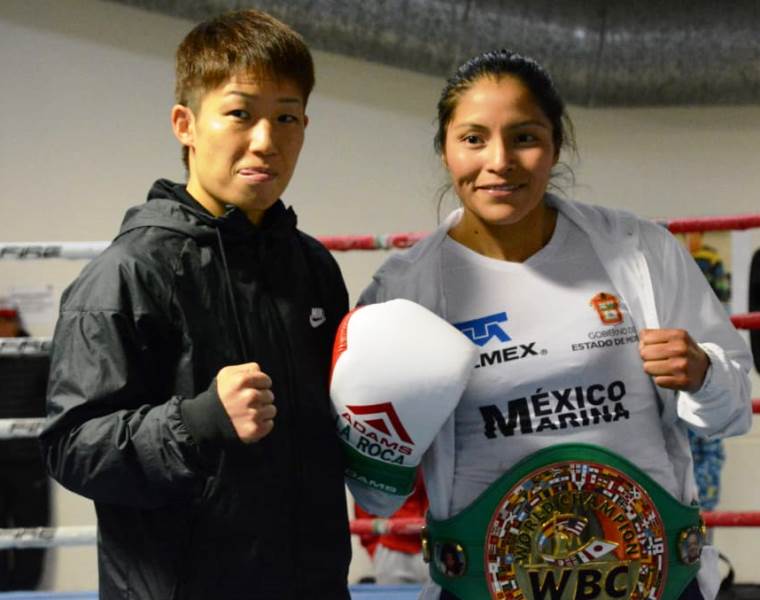 One of the most accomplished active female fighters of today, three-time world champion Ibeth “Guerrera Otomi” Zamora (29-6, 12KO) is ready to make the first defense of her WBC flyweight title this upcoming Saturday night, November 17th, in Puebla, Mexico, against Japan’s Chaoz Minowa (6-1, 5KO).  The scheduled ten rounder will be the main event televised in Mexico by mega channel Televisa.

“I’m happy thankful for the opportunity to defend this, my third world title,” Zamora said at a press conference this week to announce the world championship bout.  “I am thankful for the support of the WBC and for this fight. I have gone back to my original trainer and made my camp in the mountains of Toluca to get ready for this fight.”

After capturing the interim WBA 105-pound title in only her eighth fight back in 2009, the 29 year-old Zamora made her name as a light flyweight after capturing the vacant WBC strap with a split decision in Japan over Naoko Shibata in 2013.

She defended that title eight times against some of the heaviest hitters of the division including Ava Knight, Jessica “Kika” Chavez, Jolene Blackshear, Esmeralda Moreno and Keisha McLeod-Wells.

She dropped the title to Moreno in their return fight in a hotly contested split decision loss which was part of the WBC flyweight tournament despite the weight limit being 108 pounds.  Instead of seeking revenge she opted to move up four pounds to the flyweight division and going after the title there once Chavez left it vacant due to her pregnancy.

After testing the waters with a dominant performance against the much taller Isabel “Estrella” Millan in late 2017, she defeated former two-time world champion Melissa McMorrow for the green and gold strap in May of this year with a lopsided unanimous decision.

Zamora says she has loftier goals than just defending her title against Minowa.

“I would like to unify the division to prove that the WBC champion is the best,” Zamora explained.  Currently the other champions in the division are Naoko Fujioka for the WBA, Leonela Paola Yudica for the IBF and Arely Muciño for the WBO with British amateur standout Nicola Adams as the interim.  “I am glad promoters have noticed us women have the same value as a male fighter.  I hope hopefully the purses will also be equal.”

“It is going to be an explosive night,” Zamora said of Saturday night.  “I am ready to give a great fight.  I know I have to give a show. I expect to get the win and I promise the title stays in Mexico.”

The 31 year-old Minowa nowhere near has the experience as a title challenger that Zamora is used to.  Despite the Japanese’s limited experience, Zamora is not taking her advantage for granted and stated she worked extra hard to be ready for her first title defense.

“My sparring sessions were extremely tough.  My opponent has a small number of professional fights but I have lost against a fighter with not too many fights.  Just like I broke the record of defenses by a flyweight, I want to do the same at 112 pounds.  I prepared myself well to face an opponent who has won the majority of her fights by knockout, who has a dangerous right hand.  I hope I get a quick win.”

In seven professional fights she has only faced an opponent with a winning record three times with one of them, Tenkai Tsunami, handing her the only loss of her career via an 8th round TKO.  The fight was for the vacant WBO light flyweight title in March.

Minowa, a veteran of over 150 amateur fights in her native Japan, bounced back from that loss three months later with a first round knockout of Apinya Srinuan in Thailand and now will be traveling outside her country for her second fight in a row.

For Minowa her initial dream wasn’t to become a professional so soon in her boxing career.

“My wish was to make it to the Olympics.  I dreamed of winning the gold medal for my country.  We tried it for two Olympic cycles but we didn’t make it because of different circumstances.  We then decided to turn professional.  At the time I turned pro I was ranked sixth in the world as an amateur.”

Although there are a number of world class Japanese female fighters, Minowa says they don’t have the support female boxers enjoy in Mexico, but she believes with a win over the powerful Zamora and the green and gold belt around her waist that can change.

“In Japan there is great female fighters, great champions, but we don’t have the same support as the fighters in Mexico,” she explained.  “Here they are recognized, admired, they are stars in the sport.  In Japan it takes a lot of work to get support.  Here the press writes about female boxing and in Japan very little.  That is why I came to Mexico to beat Zamora and make more people look at the work of Japanese female fighters.”

As far as her chances this Saturday night, Minowa is confident she has what it takes to become a world champion.

“I am very confident in winning.  I see Zamora as very strong, she is a warrior, her style is similar to mine.  We are going to come out with everything from the opening bell, to win, throw a lot of punches.  For Japan to respect female boxing more we have to win.  I want to take this title to Japan.  I am not going to talk about my plan but I am a knockout artist and I prepared myself for that.”