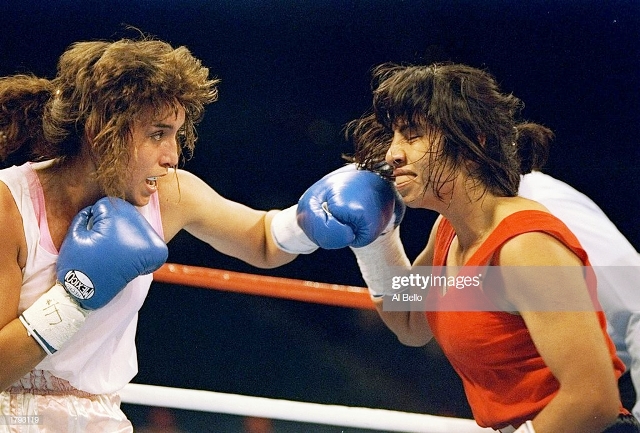 Prizefighters.com Shares A Few of the Greatest Female Fights in Last 25 Years

With Claressa Shields and Christina Hammer poised to clash on Saturday in an epic middleweight showdown, here are a few dazzling female fights to compare.

Over the decades many battles between female prizefighters took place. Many of them were not recorded or televised and have disappeared except in the memories of those few who witnessed them.

A few remnants remain and can be seen on various social media networks and some are mainly retained by a person here and there by those lucky enough to have a handheld recording device.

Below are a number of female prize fights that are considered by us as the best we saw either in person or by recording. We cut it down a bit and we apologize for missing any that are not mentioned in this story. But here are a few suggestions for fans that love female prize fights like we do.

Christy Martin and Laura Serrano – May 1994 – Martin was well known by those following female boxing, but Mexico’s Serrano was unknown and making her pro debut. that night in Las Vegas. It was one of Don King’s loaded monster shows and the two female lightweights lit up the arena with an incredible performance that left the audience mesmerized. The torrid six-round fight ended in a draw. Serrano would later become a world champion and Martin continued to enhance her own legend. Both would never be in boring fights.

Lucia Rijker and Chevelle Hallback – March 1997 – The talented Rijker was already considered one of the most talented fighters ever and usually scared off the competition with her fighting prowess. Florida’s Hallback had only one previous pro fight and willingly accepted the fight. The two exploded with punches and the fight was on. Hallback would lose but she would later become one of the best fighters pound for pound for a period of time. Rijker is considered by many to be female boxing’s greatest fighter of all time.

Layla McCarter and Chevelle Hallback – July 2004 it was their second meeting and took place at Pala Casino near San Diego. At the time many considered Chevelle Hallback among the best fighters pound for pound. McCarter was developing into a much better boxer and when they met that night they showcased their immense boxing skills. The fans were in awe of their fighting ability and cheered deliriously each round. For some, it remains the greatest female fight ever televised. Hallback won that night in a very close fight. McCarter would become an even better fighter as the years progressed.

Regina Halmich and Daisy Lang – May 2004 – Both of these women were super stars in Germany and regularly sold out boxing shows. When they finally met it was the first mega fight in female boxing history. At the time, Germany was the center of the world when it came to female prizefighting. That night remains the benchmark for women’s prizefighting in Europe. The fight between the two German blondes was epic and saw Halmich win by decision.

Elena Reid and Regina Halmich 1 – September 2004 – Halmich had recently defeated Lang in the battle for Germany and then invited America’s Reid to battle. The Las Vegas-based Reid surprised everyone and stormed the German fighter with her aggressiveness for 10 rounds. The fight ended in a split-draw and proved there was talent in America. It also set the stage for a rematch which Halmich won. Reid later won the flyweight world title and was one of the more popular American fighters.

Melinda Cooper and Donna Biggers – June 2008 – For years Cooper, a super flyweight, was considered one of the most talented fighters in the world but was unable to find a place on a fight card. On this day, on a televised card, Cooper willingly accepted a fight against Biggers who had campaigned at lightweight. Fighting someone five divisions heavier didn’t matter to Cooper who proceeded to show off her immense fighting skills to the fans in Connecticut and those watching on television. It showed just how good women prizefighting could be.

Marcela Acuna and Jackie Nava – April 2009 – Mexico’s Jackie Nava ventured south to Argentina to face that country’s legendary fighter Acuna in Buenos Aires. It was an intense battle between two super powers in the world of female boxing. Nava was floored in the 10th and final round to give Acuna the win by decision and the world title. Both of these women are still champions and certain to be Hall of Fame picks when they retire.

Jackie Nava and Ana Maria Torres 1 and 2 – April 2011 – If you like pure savagery this one is for you. It was a battle between Tijuana’s Nava and Mexico City’s Torres and both hit each other with every punch possible. Both world champions unleashed the fury against each other in a breath-taking fight that ended after 10 rounds in a draw. It’s one of those fights that have to be seen to believe.

Anne Sophie Mathis and Holly Holm 1 – December 2011 – This title fight brought France’s power-hitting Mathis to New Mexico to face hometown favorite Holm. The extremely athletic Holm was caught with one of those Mathis big blows and was demolished no thanks to the referee. It could have been the end of Holm’s career who was brutally knocked out. Amazingly, Holm recovered and defeated Mathis in a rematch and now fights in MMA. Most people know her as the first to defeat Ronda Rousey.

Mariana Juarez and Shindo Go – July 2012 – Whenever you pit Mexico against Japan expect the two warrior nations to explode on each other. This flyweight fight took place in Southern California and saw Juarez use her guile to offset the ferocity of Go’s attack and win by split decision. Juarez later moved up in weight and reigns as the bantamweight world champion and Mexico’s greatest female draw.

Naoko Fujioka vs Mariana Juarez – March 2015 – Once again Japan and Mexico produced another epic battle. In this super flyweight clash Japan’s greatest female fighter faced Mexico’s greatest fighter and the two female warriors used every trick in their immense playbook. After 10 back and forth rounds Fujioka emerged the winner by split decision in Mexico City. Their ability to change attacks and strategies showcased female boxing at a higher level.