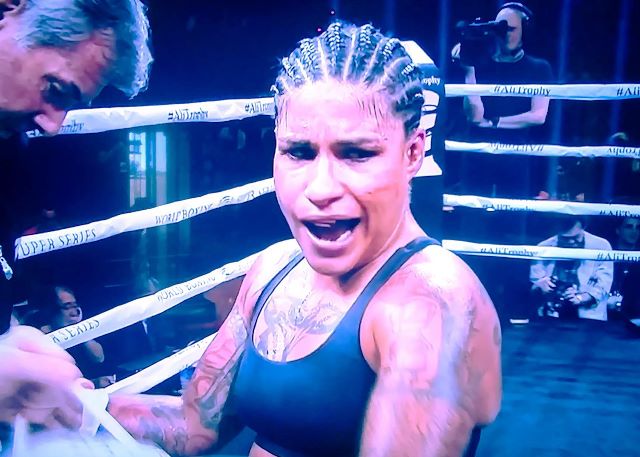 If anyone thought the new wave of young talented fighters coming from the amateur world signals a takeover, just hold on a minute. There are plenty of skilled veterans remaining to remind boxing fans that speed, power and youth are not always enough in the prizefighting world.

Melissa Hernandez came out of the shadows of retirement and showed young budding star Selina Barrios some valuable lessons in the sweet science and also gave a wake-up call to the professional fight world. The Puerto Rican fighter who turns 40 next year won convincingly last Saturday.

It should not have been a surprise.

Three of Hernandez’s losses came against Layla McCarter who is seen by this publication as the top female pound for pound. Like Hernandez, the Las Vegas fighter McCarter has many losses but those were more than 12 years ago and also to top fighters. She has not lost a fight since.

Ironically, the last person to beat McCarter was Hernandez and that came exactly 12 years ago on Saturday April 27 when she was handing Barrios a defeat in Louisiana. It should not come as a surprise that Hernandez won, but that she seemed to be sharp as ever.

“It feels like I needed the layoff,” she said on Saturday night to ThePrizefighters.com

Hernandez also said she will continue to fight between 140 and 147 pounds. She returns to the fight game at a very good time.

If not for Texas fighter Barrios willing to fight Hernandez the fight world would not have seen the prize fight on DAZN.

Barrios showed guts and confidence in facing Hernandez. She wasn’t caught unaware of the Puerto Rican’s exploits. But she willingly accepted to fight “the Shark” and that says a lot about Barrios.

Undefeated records really don’t mean a thing unless they come against top opposition. Barrios will learn from the loss the same way one of her formerly vanquished foes learned from losing to her. In boxing, you never stop learning. At 26 years old Barrios will remain a major part of the boxing scene for years if she chooses. And years from now she will in turn beat some upstart with an undefeated record.

Miami’s Rosalinda Rodriguez (10-0) soundly defeated Martina Horgasz (5-3) in a rematch last Thursday night at Sams Town Casino in Las Vegas. It was the second time in six months the undefeated bantamweight defeated the Hungarian with four knockouts in five wins.

Rodriguez, 32, is eager to face major competition but not for free. She is managed by Mercedes Vazquez and seeks a match with Ava Knight who lives in Las Vegas. There are others on her radar as well said Vazquez.

In Las Vegas the fifth edition of the Box Fan Expo takes place this coming Saturday May 4, at the Las Vegas Convention Center on 3150 Paradise Road. It begins at 10 a.m. and ends at 5 p.m.

Dozens of current and former boxing stars will be there to meet in various booths and platforms including Roberto Duran, Tommy Hearns and Floyd Mayweather among other past champions. Current champions expected to appear are Mikey Garcia, Errol Spence Jr. and Keith Thurman. Many others will be at the event including Mia St. John.

For information go to: http://BoxFanExpo.com

On Friday May 3, middleweights Matija Paradzik (2-0) and Marija Vukovic (0-9) meet in a four round contest at Capljina.

Hadria Bader (0-0-1) and Buchra El Quaissi (1-0-1) fought to a draw after four rounds on Saturday April 27. The flyweight match was held in Auch.

On Saturday May 4, super featherweights Aurelie Froment (1-0) and Helena Claveau (0-1-1) meet in a four round fight at Marseillan.

On Sunday May 5, super lightweights Elena Ghezzi (2-0) and Giulia Grenci (2-1) meet in a six round clash in Rome.

Miki Matsuda (5-5) knocked  out Asami Jinnari (6-4-1) in the fifth round on Sunday April 21. The Japanese featherweight title fight took place at Kanazawa.

On Saturday May 4, heavyweights Dianne Beazley (0-0) and Ashley Campbell (0-2) meet in a four round clash at Lake Karapiro.

Yarameis Reluz (1-2) knocked out Teresa Almengor (1-2-2) in the first round on Saturday April 27. The super bantamweight fight was held in Panama City.

On Monday April 29, super flyweights Tamara Melkonyan (0-1) and Lidia Sakhonchik (0-1) meet in a four round fight at Moscow.

Hee Eun Gang (1-1) beat So Young Lee (0-3) by decision after four rounds on Sunday April 28. The super bantamweight bout was held in Seoul.

Viviane Obenauf (14-5) was the winner by unanimous decision after six rounds versus Monika Antonik (1-16) on Saturday April 27. The featherweight but took place in Interlaken.

Himeki Kameda (5-0) was the winner by technical knockout in the second round over Kannika Bangnara (1-2) on Wednesday April 24. The light flyweight title fight took place in Sara Buri.

Linda Dostalkova (2-0) beat Anelle Massey (0-1-1) by decision after four rounds on Saturday April 27. The welterweight fight was held in London.

Chantelle Cameron (9-0) won by second round technical knockout over Feriche Mashauri (7-4) on Friday April 26. The lightweight match was held in London.

LesSandra Franklin (1-1) knocked out Julie Metzner (0-3) in the second round on Saturday April 27. The lightweight fight was held in Neosho, Missouri.

Marlen Esparza (6-0) defeated Jhosep Vizcaino (9-9) by unanimous decision after eight rounds on Thursday April 25. The flyweight contest took place in Indio, Calif. It was Esparza’s first fight in a year after taking time off to have a baby. (For more on this fight read the story that appeared on this web site on Thursday.)

Rosalinda Rodriguez (9-0) was the winner by unanimous decision over Martina Horgasz (5-3) after six rounds on Thursday April 25. The bantamweight fight was a rematch and took place in Las Vegas, Nevada. Rodriguez, 32,fights out of Miami, Florida. In another bout, Shurretta Metcalf (6-3-1) defeated Mikayla Nebel (2-7) by unanimous decision after four rounds in a bantamweight contest.

On Saturday May 4, super lightweights Michaele Nogue (0-1) and Brittany Evans (0-0) meet in a four round match at Waldorf, Maryland.