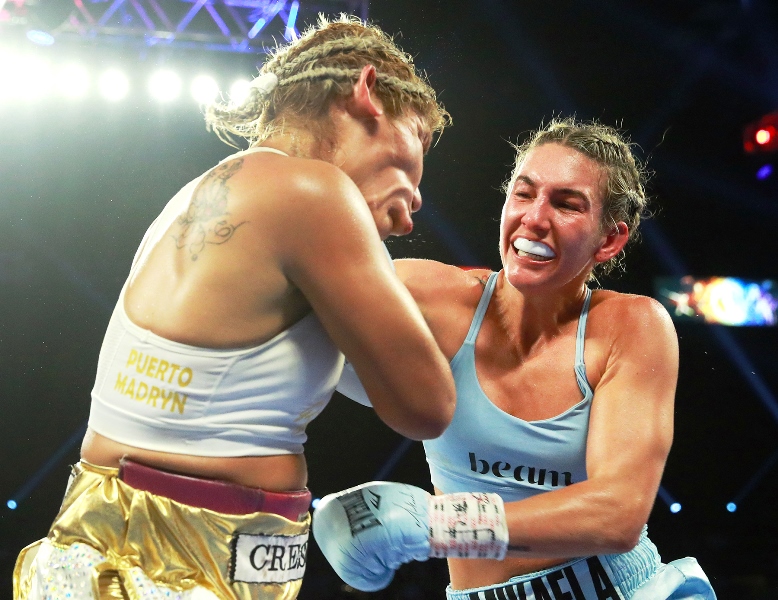 The Mayer right cross was on point.

A Las Vegas crowd of more than 9,000 at the MGM Grand saw why many including Mayer (11-0, 4 KOs), feel she is ready for a world title shot with a strong performance against the Argentine challenger Crespo (13-5, 3 KOs).

“Crespo was a tough challenge, but I got through it and I am ready to move on to bigger things,” said Mayer. “She was awkward.”

The fight started slowly for Mayer who seemed a little confused by the shorter Crespo’s method of attack. For the first two rounds overhand rights from the Argentine fighter landed and though Mayer’s jab was connecting solidly, Crespo was able to tag the taller American fighter every time.

It all changed in the third round as Mayer stayed her ground and connected with lead rights to the body and then countered with a left hook that seemed to stop Crespo’s momentum suddenly. For the first time Crespo was not moving forward and instead was evaluating the situation.

Mayer had changed the momentum and now was moving forward behind her lethal right cross. The blows could be heard every time she connected. Whether it was a lead right to the body or right to the head, the blows were solid. Crespo was not advancing as aggressively any more.

“I came on strong in the second half of the fight,” said Mayer.

Crespo absorbed big blows but though her attack had slowed, she was still looking to land her own looping rights. She had found success early and was looking for more. She opened up the fifth round with a five-punch combination and followed it with a three-punch combination but Mayer was able to evade the big blows. Mayer fired a one-two combination that connected solidly at the bell.

From the sixth round on it was all Mayer as she rocketed rights on Crespo’s head and body while blocking most of Crespo’s return fire.

Mayer seemed to have her best round in the seventh as she exchanged with Crespo and emerged with a lead right cross that caused Crespo to hold and use her head to butt. It seemed intentional. The referee warned the Argentine fighter about using her head. Mayer retaliated with a left uppercut followed by a left hook. Then she switched up and fired lead rights on Crespo’s head to end the round.

For the next two rounds Crespo began holding whenever the taller fighter was close enough to grab. The action stalled for the rest of the fight as Mayer remained in control and kept firing one-two combinations. The blows echoed in the arena. The last blow of the fight was fittingly a wicked right to the head by Mayer.

She told the media her next fight must be a world title match.

“I am ready for a world title fight next. It’s time for the champions to step up and get in the ring with me,” said Mayer.

Offers to fight two super featherweight world titlists have already been made but were previously declined. They may not be able to avoid Mayer any longer. Finland’s Eva Wahlstrom holds the WBC title and Hyun Mi Choi the WBA version.

“If we can get one in the next few months I want it,” Mayer said of a world title bid.

She is definitely right.