No Winners in Las Vegas – Eva Wahlstrom and Ronica Jeffrey Draw
Written by: David A. Avila 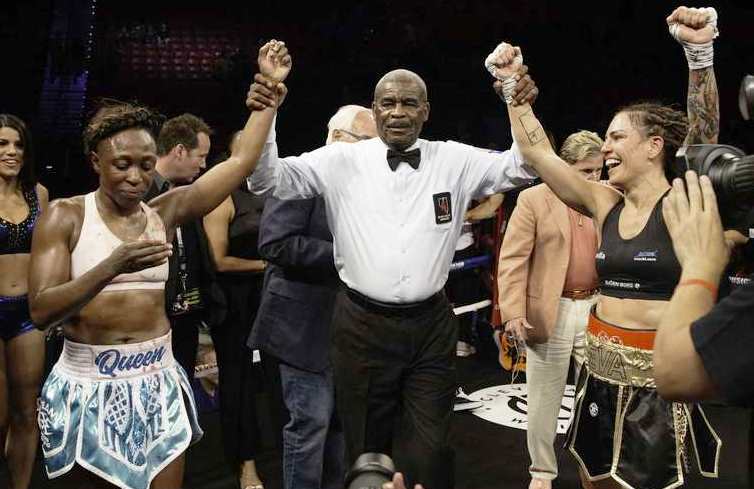 The fight ended in a split decision draw having Wahlstrom of Helsinki, Finland winning one card at 96-94, Jeffrey of Brooklyn, New York with a huge win of 100-90 and the final card with 95-95 for the draw.  A clear look of disappointment from Jeffrey’s team was countered with a satisfied Wahlstrom.

Judge Lisa Giampa had Jeffrey winning 10 points over Wahlstrom, seeing Jeffery as the comfortably busier fighter of the two. Although Wahlstrom had her moments of clean jabs upon Jeffrey; Jeffrey’s multiple combos ending with uppercuts were overly abundant versus Wahlstrom’s counter. When caught in the clutch a good exchange of combinations landed by both women throughout the rounds. Overall, Wahlstrom’s strong right hands and jabs kept her moving; while Jeffrey’s defense and combos were delivered and clean.

This was Wahlstrom’s first defense since winning the title belt by a majority decision win against Melissa St. Vil back in April 2018. Wahlstrom’s most recent fight was a loss against Ireland’s Katie Taylor (14-0, 6 KO) by unanimous decision for the WBA and IBF lightweight title.

“I thought I won the fight” says a disappointed Jeffrey; whereas Wahlstrom claims to have agreed with the judges split decision draw, “I think it was even”. But, a look of shock over Wahlstrom didn’t match her words when the judge’s results were read.

In the undercard, Las Vegas, Nevada’s own Jamie “The Miracle” Mitchell (5-0-1, 3 KO) came into the bout with an undefeated record against Roanoke, Virginia’s Britain Hart (3-3-1, 2 KO) in a super bantamweight clash.

Both women wasted no time fighting head on at the sound of the first bell with toe-to-toe action throughout all six rounds. A flurry of punches from Hart made it difficult for Mitchell but she maintained her game plan.

Overall Mitchell was the more technical boxer but the active Hart made her work by scrapping with the Las Vegas native. A straight right hand to the chin shocked Hart in the fourth round but it didn’t stop her from throwing her wild punches.

In the later rounds, Mitchell gathered her power and landed hard punches upon the wide-open combos’ Hart was hopeful in landing. Mitchell, whose last bout was November 2018, came into her sixth bout of her professional boxing career with five consecutive wins hoping to continue her streak. But, the judges scored the bout 59-55 Mitchell and two judges 57-57 for the majority decision draw.