Napoleon, Reis and Joseph Win at Foxwoods
Written by: David A. Avila 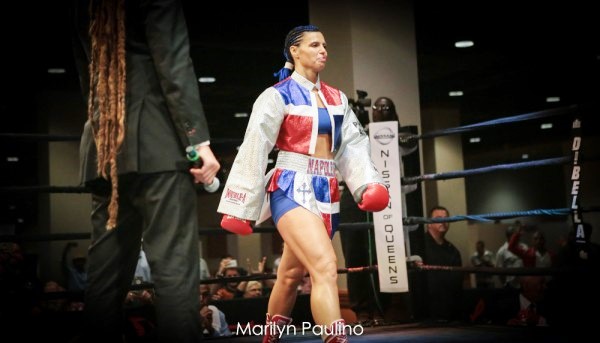 Alicia Napoleon proved too experienced for Schemelle Baldwin despite her amateur background and stopped the taller fight by technical knockout to retain the WBA super middleweight title on Thursday.

It was Napoleon’s second defense of the world title and though she faced a much taller opponent in Baldwin, she took her time in setting the scenario to take over the fight. An accidental clash of heads bothered Baldwin who just recently left the amateur boxing world and head gear.

The second round saw both exchanging and unafraid to exchange. Napoleon scored with several rights and Baldwin scored too.

Napoleon must have planned ahead of time for her third round strategy. The New York based fighter immediately targeted the body of the taller Baldwin and shoved her way inside of her longer arms. Napoleon shot a combination that seemed to shock Baldwin who immediately covered up in a shell. The onslaught began as Napoleon unleashed at least 20 unanswered blows as Baldwin shrunk behind her gloves and took the blows. The referee merely looked at the one-sided pummeling. At the end of the round Napoleon looked at the referee in puzzlement.

It could have been a ploy by Baldwin to tire out the champion but it was a bad idea. Napoleon opened up the fourth round the same way she closed the prior round with nonstop battering. Again Baldwin covered up but did offer some resistance, just not enough. Napoleon a dozen unanswered blows and this time the referee did step in and stop the fight at 1:30 of the fourth round. Napoleon retained the title by technical knockout.

“I had to get settled in a bit,” said Napoleon. “I sparred with her before. I had to get comfortable.”

Napoleon said she’s ready to clash with the other world champions especially in the super middleweight division.

“Everybody knows Claressa Shields but they don’t give the others credit,” said Napoleon of the media and the fans.

Kali Reis (16-7-1, 5 KOs) walked into the boxing ring as the bigger fighter dropping down three weight divisions while Patricia Juarez (4-2) moved up a weight class. After six rounds in the super lightweight class Reis proved size does matter in winning by unanimous decision.

After battling unified welterweight world champion Cecilia Braekhus a year ago in Los Angeles, and then winning by knockout almost a year ago against Szylvia Szabados, many felt Reis would simply steamroll past Colorado’s Juarez. But the sister of the famous Mexican fighting siblings has that pedigree.

From the opening bell Reis opened up with big rights and though some connected she was met with return fire. Though Juarez never seemed to be able to hurt Reis it was enough to give the former middleweight world champion second thoughts about a quick knockout victory.

Juarez moved up from lightweight for this fight and it seemed to slow down her punches. But the middle sister of Mexico’s Mariana “Barby” Juarez and Lourdes “La Pequena” Juarez tried to implement an inside fighting game that worked for a short while despite the referee breaking them up without reason. Neither fighter was truly holding but the referee forced the fight outside. Bad referee.

Still, Reis was able to catch Juarez with uppercuts and though they connected Juarez was never in danger of going down. Her head snapped a few times but she always returned fire. Both the second and third rounds were the most competitive of the fight.

After six rounds all three judges scored it 60-54 for Reis.

Helen Joseph (17-3-2, 10 KOs) was the victor by decision after six rounds versus Hungary’s Martina Horgasz (5-4, 4 KOs) in a bantamweight clash. Joseph, 30, has not lost a fight since 2015 during a world title challenge against Jennifer Han.