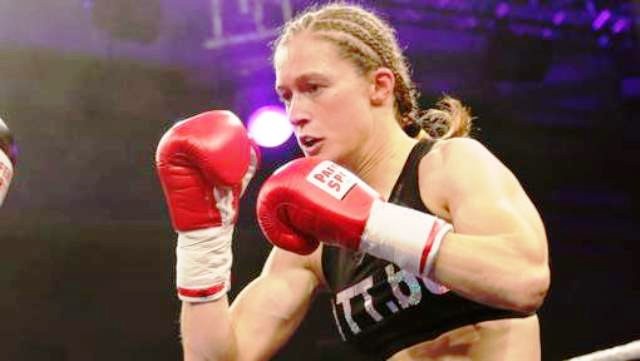 Anyone familiar with both fighters knows they each like to attack and attack. There’s no backward gear for either fighter as fans saw on Monday in Oostende, Belgium. Persoon (44-2, 18 KOs) won the vacant title by unanimous decision after 10 furious rounds with Joseph (17-4-2, 10 KOs).

The bigger Persoon won the fight but Joseph, who trains in the U.S., let the world know she has the will and the talent to fight anyone from super flyweight to super featherweight.

“I lost the decision. That is boxing. I beat her up,” said Joseph, 30, on her social media account. “I hope she is ok. Respect to my opponent. It was a great promotion.”

Each moved in firing punches with little pause. Joseph was adept at slipping and countering while Persoon used her strength to shove Joseph back to gain distance for her punches. Neither was willing to give ground in 10 rounds of furious action.

“I worked the body and the hook and overhand right,” said Joseph after the battle. “My opponents know why I am called Iron Lady. Because I hit hard,” said Joseph. “The judges don’t know how those punches feel. I pick my shots instead of wasting punches.”

Persoon, 34, last fought against the great Katie Taylor and extended the Irish fighter the entire 10 rounds in a firefight that can be considered the best of the year. Against Joseph, the taller and bigger Belgian fighter needed to bring her full artillery.

“People said the weight was too big for me, but my endurance was good and I felt strong. She never hurt me” Joseph said. “People said I could not back her up but in the eighth round I made her fight going back.”

Joseph felt that despite the loss it was a moral victory and proof that she was the stronger fighter.

“I came to her hometown and we fought a good fight,” said Joseph. “I showed I can fight.”

For the past several years Joseph and her team have tried to fight any of the top names in the world, but fighting outside of her native Nigeria, found it difficult to lure champions without backing from a large promotion company. She has been willing to travel overseas on several occasions as was the case on Monday.

Joseph would love a rematch.

“I want a rematch on neutral ground,” Joseph said. “We put our hearts and souls on the line.”

The win by Persoon also keeps her in the running for a rematch with Taylor and perhaps a showdown with Top Rank’s Mikaela Mayer.

Once again Lourdes “La Pequena Lulu” Lourdes, the younger sister of Mariana Juarez, returns to the ring and despite improving in all facets of the fight game, remains unable to secure a world title fight. She has not lost a bout in five years and has a 25-fight winning streak that includes wins over Diana Fernandez,  Alondra Nava, Jacky Calvo, Karina Fernandez and Guadalupe Bautista to name a few.

It’s one of the weirdest situations in the sport of women’s boxing.

Though ranked in the top five as a flyweight, Juarez has never challenged for the world title and remains fighting barely competent opposition on occasion through no fault of her own. This past week she defeated Belen Gonzalez by decision.

Sulem Urbina, a former Mexican Olympian who lives in Phoenix, Arizona, recently had her contract expire with Zanfer Promotions. On Saturday she will be fighting on a Golden Boy Promotions card against Luz Elena Martinez at San Miguel de Allende, Mexico.

Urbina is undefeated and has never fought in the U.S. She could be a solid addition to the West Coast promotion company.

On Saturday Nov. 16, welterweights Linda Winmar (1-2) and Arasa Nimnoi (4-4) meet in a six round match at Punchbowl, New South Wales.

Jianping Ouyang (5-1-1) won by technical knockout in the sixth round versus Thaksaporn Intachai (1-1) on Sunday Nov. 10. The light flyweight bout took place at Fuzhou.

Oshin Derieuw (13-0) knocked out Mariam Tatunashvili (1-13-2) in the sixth round on Saturday Nov. 9. The super lightweight fight was held at Pas de Calais.

On Saturday Nov. 16, featherweights Chandni Mehra (4-1) and Shaik Nazreen (0-0) meet in a four three-minute round fight at Darjeelin.

On Sunday Nov. 17, super flyweights Kanako Tabuchi (0-0) and Ozora Hikaru (0-5) meet in a four round contest at Hyogo.

On Saturday Nov. 16, featherweights Esther Del Angel and Mercedes Toala make their pro debuts against each other at Chiapas.

On Saturday Nov. 16, super featherweights Katherina Thunderz (12-0) and Danila Ramos (8-1) meet in a 10 round title fight at Oslo.

On Thursday Nov. 14, bantamweights Fatima Dudieva (5-0) and Dorota Norek (4-0) meet in an eight round fight at St. Petersburg.

On Friday Nov. 15, lightweights Natasha Jonas (8-1) and Bianka Majlath (3-3) meet in a six round bout in Liverpool.

Briana Sanchez (2-0-1) and Amanda Borg (0-0-1) fought to a majority draw after four rounds on Thursday Nov. 7. The light flyweight bout took place in Phoenix, Arizona. Borg fights out of New Mexico and Sanchez out of California.

On Saturday Nov. 16, featherweights Helen Peralta (1-0) and Maia Kahaunaele (0-0) meet in a five round bout at Biloxi, Mississippi.

On Saturday Nov. 16, super lightweights Destiny Day-Owens (1-0) and Dasha Ragland (0-1) meet in a four round fight at Glen Burnie, Maryland.