Cecilia Braekhus Back in the Fight and More News
Written by: David A. Avila 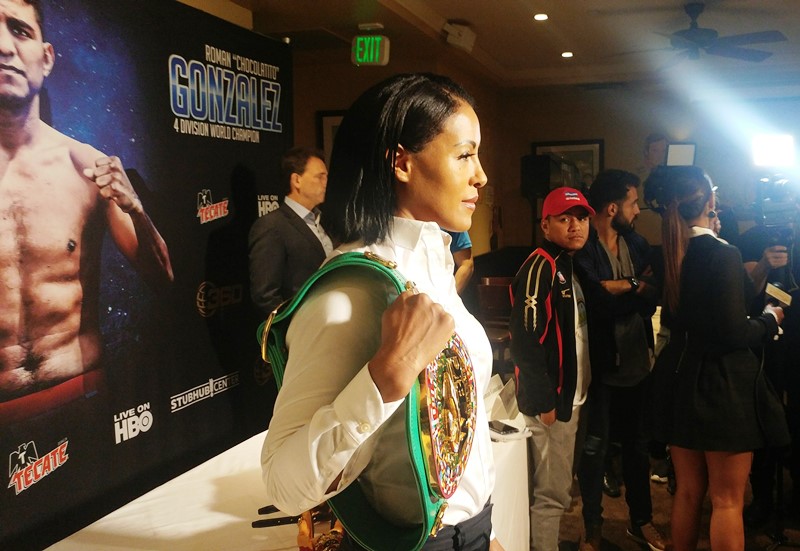 Almost a year has passed since welterweight world champion Cecilia Braekhus performed on a cold December night that ended television network HBO’s last involvement with the world of prizefighting.

It took the Norwegian months to find a promotional and media partner and now Braekhus (35-0, 9 KOs) finally returns on Saturday Nov. 30. She defends the WBA, WBC, WBO and IBF titles against Argentina’s Victoria Bustos (19-5, 0 KOs) in a 10 round fight at Casino de Monte Carlo in Monte Carlo. DAZN will stream the world title clash.

A couple of changes have been made.

Braekhus, 38, changed trainers and now works under the supervision of Abel Sanchez. Ironically, Gennady “GGG” Golovkin now trains with Johnathan Banks who formerly worked with the Norwegian champion. They’ve switched partners with Braekhus moving into Big Bear, California to prepare for this fight.

In the boxing world it’s widely known that Sanchez molded Golovkin from a boxer-puncher into a hunter-killer in the boxing ring. Will he do the same for Braekhus?

Over the many decades that I’ve known Sanchez, he’s preferred to end all fights by knockout, not decision.

“It’s the only way to assure you win the fight,” says Sanchez.

Braekhus, though equipped with ultra-athleticism, has never been a prizefighter known for delivering the knockout. The model-looking boxer known as the “First Lady” has always been satisfied with winning by decision.

That could change in this fight with Bustos.

Just by looking at Braekhus as she fights with a slight “gangster lean” one can tell she always packed power. Now Sanchez will be developing the killer instinct in the Norwegian queen of boxing.

Bustos, like most Argentine fighters, is battle tough and can boast never losing by knockout. That status could fall while facing a re-charged Braekhus intent on showing her new promotion company Matchroom Boxing that she’s worthy of a contract.

Braekhus has a severe height advantage as well as weight, speed and power over the Argentine fighter Bustos who normally campaigned at lightweight and super lightweight and won world titles in both weight classes.

It’s a battle which could reveal whether Braekhus can deal with the busier fighting style the lighter weight girls possess. It’s a fight that can also prepare her for a looming battle against Ireland’s Katie Taylor in the super lightweight division. It’s a mega fight that could be made now that both fight with Matchroom Boxing.

Braekhus can also move up in weight to the super welterweight class, but it makes more sense to drop down.

Fighting on the Mediterranean Sea will be Scotland’s Hannah Rankin (8-3, 1 KO) defending the IBO super welterweight title against Sweden’s Patricia Berghult (13-0, 3 KOs) at the Hotel Inter-Continental in Malta on Saturday Nov. 30.

Rankin now fights with Salita Promotions and sparred with Claressa Shields for this upcoming world title defense. It was a year ago that Shields defeated Rankin in a middleweight clash, now as super welterweights they’re mates.

“To be sparring with someone like her is the best thing possible for me. I always say that if you want to be the best, you need to be in there with the best so that has been great for me,” said Rankin to the HeraldScotland newspaper about sparring with new stablemate Shields. “I’m definitely a better fighter than I was before my world title fight.”

Both Dicaire and Miller remain undefeated and potential foes in a super welterweight showdown with the winner of Claressa Shields and Ivana Habazin.

Tania Reid (2-2-1) was the winner by unanimous decision after eight rounds on Saturday Nov. 23. The Australian lightweight title fight was held at Tweed Heads. Also, Elli-Bliss Reynolds (1-0) won by technical knockout in the fourth round versus Ratsadaporn Khiaosopa (0-14) in a bantamweight fight.

Tayla Harris (7-0-1) won by technical knockout over Janay Harding (1-4-1) on Friday Nov. 22. The super welterweight match was held in Flemington.

Romane Geffray (1-1-1) and Amel Anouar (1-0-1) fought to a draw after six rounds on Saturday Nov. 23. The featherweight fight took place at Mayenne.

Gloria Gallardo (11-2-1) knocked out Laetitia Arzalier (15-2) in the sixth round on Friday Nov. 22. The flyweight fight was held at Cahors, Lot.

Veronica Tosi (1-0) knocked out Ana Nikolic (0-4-1) in the fourth round on Saturday Nov. 23. The featherweight match was held at Lombardia.

Kanae Mahara (2-0) won by split decision over Haruko Kaneko (1-4) after four rounds on Tuesday Nov. 19. The light flyweight match was held in Tokyo.

On Saturday Nov. 30, light flyweights Wiktoria Sadej (0-1) and Dani Hodges (5-2) meet in a four round fight at Raszyn.

On Friday Nov. 29, super bantamweights Valeria Rodionova (0-0) and Darya Kutyrova (0-1) meet in a four round fight at Moscow.

Elin Cederroos (7-0) knocked out Florence Muthoni (12-8-2) in the third round on Friday Nov. 22. The super middleweight fight took place in Valencia.

Denisa Cicoova (3-3) knocked out Sangeeta Birdi (1-1) in the second round on Saturday Nov. 23. The super lightweight fight was held in London.

Chelsey Arnell (0-0-1) and Vaida Masiokaite (1-7-3) fought to a draw after four rounds on Saturday Nov. 23. The lightweight match was held at Yorkshire.

Shayna Foppiano (2-0-1) was the winner by majority decision after four rounds against Raquel Santos (0-1) on Saturday Nov. 23. The lightweight bout took place in Lincoln, Rhode Island.

Anyela Lopez (1-0) knocked out Nicole Reinhart (1-1) in the first round on Friday Nov.22. The lightweight fight was held in Detroit, Michigan.

On Wednesday Nov. 27, featherweights Kim Wabik (2-0-2) and Jacqueline Boyle (0-0) meet in a four round fight at Windham, New Hampshire.