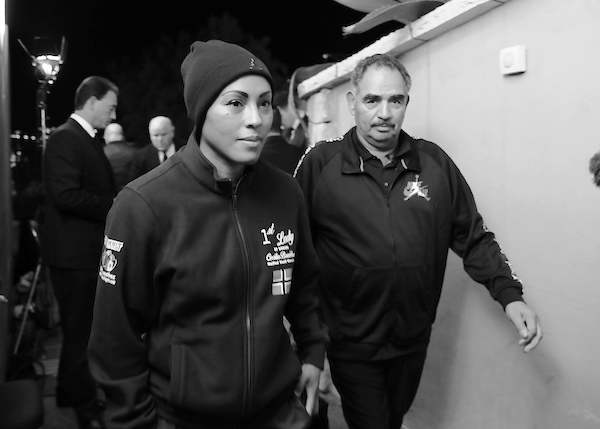 Norway’s Braekhus (36-0, 9 KOs) showed the boxing world and those sitting ringside at Le Casino in Monte Carlo that despite a year of inactivity and multiple changes in training, former two-division world champ Bustos (19-6) was no match for the long-time welterweight champion.

A year had passed since Braekhus last slugged it out with Kali Reis in Los Angeles. Since that fight the female champion known as the “First Lady” of boxing changed trainers, training location and signed with Matchroom Boxing.

With her sights set on a possible showdown with super lightweight titlist Katie Taylor, the lean model-looking welterweight champion hooked up with “Mexican style” trainer Abel Sanchez. Under his fighting philosophy knockouts are preferred over decisions and this fight was their first together.

Braekhus opened up the fight by staying in the pocket as Bustos fired single power shots with a few connecting. Braekhus never backed up.

In the past the ultra-athletic Norwegian fighter would have danced out of danger. But with Sanchez in her corner she remained in the pocket – cocked and ready to return fire, especially with that rocket right cross. Many landed.

“I think it was the third round that I began to get my groove back,” said Braekhus, 38.

Under this new fighting philosophy, Braekhus remained steadfast in not backing up despite charges by Bustos, but the new style also caused her to smother her own shots. Sanchez advised her to take one step back to open up the firing lane for her main weapon the long right cross.

It made a difference.

In the sixth round during an exchange of blows Braekhus connected with a clean left hook that sent Bustos sprawling to the floor. But the referee missed the knockdown and ruled it a slip. No matter, the judges saw it as well as those watching around the world.

Bustos rallied after the knockdown with a spirited rally in the seventh round. Though Braekhus connected with some shots the Argentine fighter was the busier fighter. It was one of two rounds that Bustos could claim.

After seven rounds Braekhus was clearly in a comfort zone and settled in. Every time the Argentine fighter unleashed a power shot Braekhus returned fire with a wicked right uppercut or a right cross. Bustos showed resilience in absorbing the blows but other than that, she was unable to mount an attack.

Braekhus methodically moved in with little care for Bustos offensive weaponry and fired three hard shots to the body in the ninth round. She followed it up with a rocket right cross and a stiff left jab that snapped Bustos head back. A right uppercut by Braekhus followed and it looked like the Argentine fighter might go down again but she countered with a left hook to stop the welterweight champion from over-running her.

In the 10th and final round Braekhus opened fire with a five punch combination that sent Bustos looking to survive. The Argentine fighter was determined to stay upright especially after a reputation of never losing by knockout despite a long career of fighting in Argentina’s rough prizefighting world.

“The last rounds we tried to just have fun and try some things we had worked on in the gym,” said Braekhus. “Now I’m back.”

All three judges scored the 10-round fight in favor of Braekhus by scores 99-91 and 98-92 twice. Braekhus retains the WBA, WBC, IBF, WBO, and IBO world titles. It was her 10th defense of all five belts.

Promoter Eddie Hearn claimed she tied the late heavyweight great Joe Louis’ record 25 title defenses, but those were 25 defenses when there was only one belt, not five different belts. Nice try.

But the Matchroom Boxing president did offer that a showdown between Braekhus and Ireland’s Katie Taylor could be made next year.

“Two undisputed champions, those two are on a collision course,” said Hearn about a showdown between the two world champions Taylor and Braekhus. “Both need at least another fight.”

Braekhus seemed pleased by the announcement that will surely land her one of the most lucrative contracts in her pro career.

“I’ll be back in the gym in Big Bear with Abel Sanchez,” said Braekhus who may drop down in weight for the showdown or Taylor could move up one weight division. “Having a boxing family once again just makes boxing so much fun.”

The year 2019 was inhabited by three unified world champions. Next year, one or two will be eliminated from that label.

The female fight world is on the verge of a momentous 2020.