Atomweights Hawton and Villalobos Show Off Firepower
Written by: David A. Avila 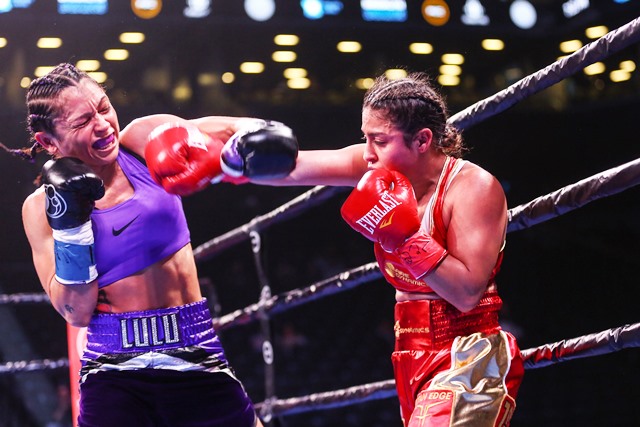 For the second time in less than two months fighters from the lesser known weight divisions – in this case the atomweights – were showcased on the big stage. Again they were equal to the task.

WBC interim atomweight titlist Louisa “Bang, Bang” Hawton met Southern California’s Lorraine Villalobos at the Barclays Center in Brooklyn on Saturday Dec. 7, and the two 102-pounders slugged it out to the amazement of the crowd and those watching Showtime around the world.

It’s a misconception that the tiny girls can’t punch. Villalobos knocked down Hawton with a well-timed left hook and down went the Aussie power-puncher in the sixth round during one of their many vicious exchanges. The crowd oohed and aahed their willingness to slug it out.

Hawton barely beat the count and despite slowly getting up was able to continue. By the next round both were back to exchanging lethal blows and looking to end the fight with a single big shot.

Back and forth the two California-based fighters went looking to find an extra advantage that would propel them to a win. Hawton continued to be the more active aggressor and Villalobos was content to slip and counter whenever possible. There were very few slow moments.

It was quite a contrast to the men’s heavyweight world title fight held earlier in the day where a towering heavyweight Anthony Joshua was content to jab and move and hold to victory. Meanwhile, in Brooklyn, Hawton and Villalobos, who combined don’t equal 205 pounds, were punishing each other with power shots and each looking to end the night with a knockout. What a dichotomy.

Hawton managed to win by unanimous decision with three judges scoring it in her favor 95-94 over Villalobos. It was a very close fight that could have gone the other way.

But though Villalobos was deemed the loser, she did show that their first encounter one year ago was merely a warmup for this fight. Hawton also showed why many including this publication consider her one of the most exciting boxers in the female boxing world. She never stops.

Their fight was not an aberration but a continuation of what the smaller weight divisions can do.

Last month in Las Vegas, East L.A.’s Seniesa “Super Bad” Estrada and Marlen Esparza slugged it out for nine rounds in a flyweight title fight. The difference was they fought in three-minute rounds. That extra minute proved to be very important in giving the winner Estrada the time to show superiority with stamina and power over Esparza.

Estrada also was able to exhibit her fighting skills and ability to change tactics due to the extra minute and emerged victorious.

In both separate bouts the women fighting below 112 pounds proved that they may pack more power pound for pound than the bigger women. Though Estrada did not win by knockout over Esparza, she had a four-fight knockout streak prior to the fight.

This past Saturday, Villalobos showed how she won her previous two fights by knockout. The tiny Mexican fighter should be called the “Mini Destroyer. ” Though she possesses boxing skills, she can easily win by knockout if she puts hands on them. She also showed why west coast fighters prefer knockouts.

The west is also known for being home to many fighters below the flyweight divisions. This weekend the world saw what the lower weight divisions are all about. They can fight.

Mary McGee finally reached the top with her convincing knockout win over Argentina’s Ana Laura Esteche in the 10th and final round to win the vacant IBF super lightweight world title last Thursday. It happened in New York City.

It was McGee’s third attempt at a world title and this time she took no chances with a withering attack on Esteche and did not stop punching until the referee broke it off at 30 seconds into the 10th round.

Now that McGee holds the IBF title she could potentially have a showdown with Chicago’s Jessica “CasKilla” McCaskill who holds the WBC and WBA versions of the super lightweight title. That’s a compelling match.

Brown, a Washington DC police officer, was nearly left standing without a fight when her previous opponent pulled out. Da Silva stepped in within a week before the fight and the two went the distance.

On Friday Dec. 13, bantamweights Micaela Sarfati (2-0) and Lucrecia Belen (0-0) meet in a four round bout at Buenos Aires.

Kim Clavel (11-0) was the winner by unanimous decision after 10 rounds versus Esmeralda Sagahon (7-4) on Saturday Dec. 7. The NABF light flyweight title fight was held at Montreal. Also Martin Vallieres-Bisson beat Tereza Dvorakova (0-3) in a featherweight fight.

On Saturday Dec. 14, light flyweights Sarah Bormann (11-0) and Lotta Loikkanen (6-0) meet in a 10 round fight for the GBU, WBF and WIBF titles at Karlsruhe.

On Wednesday Dec. 11, super welterweights Mikaela Lauren (31-6) and Paty Ramirez (12-7) meet in a six round fight at Gothenburg.

On Saturday Dec. 14, super bantamweights Maja Malenkovic (9-10) and Nana Dokadze (1-2) meet in a six round fight at Basel. Also, super flyweights Gabriela Timar (2-0) and Teona Pirosmanashvili (2-5) meet in another six round bout.

On Saturday Dec. 14, welterweights Olivia Belkacem (9-1) and Bianka Majlath (3-4) meet in a six round fight at Fribourg.

On Sunday Dec. 15, lightweights Lucy Wildheart (5-1) and Denisa Cicoova (3-3) meet in a four round fight at Hampshire.

Tiara Brown (10-0) was the winner by unanimous decision after eight rounds versus Simone Aparecida Da Silva (17-14) on Saturday Dec. 7. The NABO featherweight title fight was held in Sterling, Virginia.

Hanna Terlep (4-0) won by decision after six rounds versus Patricia Juarez (4-3) on Saturday Dec. 7. The super lightweight bout was held in Denver.

On Wednesday Dec. 11, featherweights Andrea Wright (1-0) and Jennifer Woods (0-1) meet in a four round bout at Cheyenne, Wyoming.

On Saturday Dec. 14, lightweights Alycia Baumgardner (8-1) and Cristina Del Valle (11-12-2) meet in an eight round fight at Harrisburg, Penn.