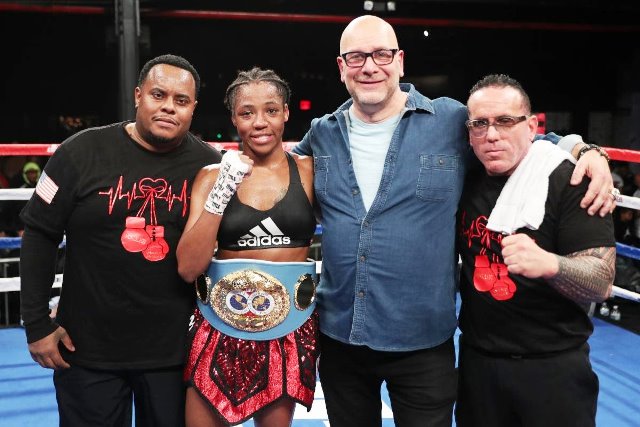 It was a long time coming for the first and only female world champion out of Gary, Indiana, Mary “Merciless” McGee (26-3, 14KO).  A pro for over 14 years it wasn’t until a couple of weeks ago she hoisted the IBF super lightweight title with a dominating 10th round TKO over the experienced former world champion Ana Laura Esteche of Argentina.

It wasn’t from a lack of trying.

In late 2013 McGee traveled south to Argentina to challenge then WBC 140-pound queen Erica Farias.  McGee came up short via a unanimous decision.

“I fought her when she was undefeated,” McGee reminisced.  “She was 18-0 at the time. I traveled to her country.  There were a few things that went on that I didn’t feel where quite clear but I don’t make a lot of excuses.  I went and took an opportunity that was given to me and I didn’t win that fight.  That was when she was in her prime at that time which was about six years ago.  I took her on.  I also took on Holly Holm for a world title in her town.”

McGee suffered back-to-back losses.  Since the Farias loss she hasn’t tasted defeat since.

Granted her career slowed after giving birth to a precocious baby boy in 2014.  Life got in the way of her championship dreams.  While raising her boy McGee worked as a caretaker in her native Gary but the flame of female boxing glory never extinguished.

“I took a break from it, I had a son,” McGee said as the reason for her sporadic activity since ’13.  In the last six years McGee has only stepped into the ring six times with a non-active 2014 and 2017.  “I had taken the time off.  That is why the last few years have been up and down.  Trying to juggle being a professional fighter and also being a mother.  Sometimes you need to step back and revaluate your career.  I feel that was the best thing for me to do because now I came back and I am a world champion.”

McGee did admit for a fleeting second she did think that maybe her time as a professional fighter had come to an end in the months and years after giving birth to her son.  “For a little while I did think of not boxing anymore.  The desire was fading somewhat but something deep inside kept telling me I still had some fight left in me.  Some of the opportunities weren’t the best ones so I couldn’t judge off those last two losses that I got.  Something inside of me kept telling me to come back.  I would start to come back but sometimes it would be difficult being a new mom because I had to take care of my child.”

McGee’s comeback, blueprinted by her manager Brian Cohen and promoter Lou DiBella, began in late 2018 with stoppage win over Latasha Burton.  In April of this year she went the distance with hard-working journeywoman Szilvia Szabados and then she found herself in the “Big Apple”, New York City, for her fight against Esteche.

“I established my jab,” she said regarding the fight.  “I also had to work off my nerves.  I had to not be so nervous and get out there and actually fight.  I think my style has changed.  I think I have become stronger and a little bit more patient than I used to be in the past.  I felt like I boxed a little bit better than I did before.  It has to be with age and things of that nature.”

At 13 McGee, a cheerleader at the time, found herself in a boxing gym in her hometown of Gary not because she wanted to fight but because she liked a boy.

“He said, ‘I am going to the boxing gym,’ and I said, ‘we don’t have a boxing gym in Gary,’” she said with a laugh.  “I followed him there and I walked up to the coach because the coach said I couldn’t be there unless I was a boxer.  So I said I wanted to box.  The coach didn’t want me there so three days later he got me beat up.”

“He thought it would make me quit but it made me train harder,” she stated.  “I kept training and it just made me fall in love with the sport.”

Eventually McGee quit cheerleading and the boy she followed into the gym didn’t out last her.

Her decision didn’t really bode well with her Jehovah Witness grandparents who she lived with at the time.  They asked her to quit but she didn’t so she began to sneak out to train.

“I ended up getting caught on the local TV channel fighting in Indianapolis,” McGee explained.  “I had to move out.  I lived with my cousins for a while; I lived in my car for a little while just because I wanted to box.  I was thinking about what I wanted to do.  I was 17 at the time and I said, well, I don’t ever want to look on TV and see another girl boxing and that could have been me.  I decided to take a chance.  It was worth it.”

“I wouldn’t call it a fight town,” McGee said of her Midwest hometown.  “I am the only female boxer they have ever had.  First female world champion and I think the last male world champion that was actually from Gary was Tony Zale and that was like in 1940 or something like that.  That was a long time ago.  My city will make you strive to work hard for your dreams.  There is not a lot to do here so when I do fight it is pretty much a big deal in my city.”

Now that she is a world champion McGee understands the target is on her back but whom does she want to fight?

“My goal is to fight Katie Taylor,” McGee said in without hesitation.  “In my weight class, 140 pounds, is where a lot of female fighters are at.  A lot of opportunities.”

One opportunity she would definitely not let pass up it is to face the current super lightweight WBC and WBA world champion Jessica McCaskill.  Not only would it make sense career wise, since it would be a unification fight, but it also has personal incentive for McGee.

“I was having issues getting my fight made so I created a GoFundMe page,” she continued explaining.  “She cracked fun by saying if you have to make a GoFundMe page then you signed with the wrong people.  When she said that I commented on her post saying I wouldn’t have to make a GoFundMe page if you fight me.  She said she wasn’t going to fight me because I didn’t have a title, which was a few months ago.  For me it is kind of personal because you don’t make fun of anybody’s struggle.  I was willing to do anything but give up, so I humbled myself and made that GoFundMe page but it wasn’t for her to make a joke about it.  For me it is slightly personal.”

McGee also mentioned Cecilia Breakhus as a potential dream fight but reiterated her main goal is to get McCaskill inside a ring sooner than later.

“I am going to take another fight here February 8th,” McGee said of her next fight programmed for her hometown.  “I don’t know who yet.  After, I plan to fight Jessica.  She is an easier fight than Ana (Laura Esteche).  Everything goes well, I’ll do it.”

To listen to the whole unedited interview, please visit BlogTalkRadio.com/2MinRound’