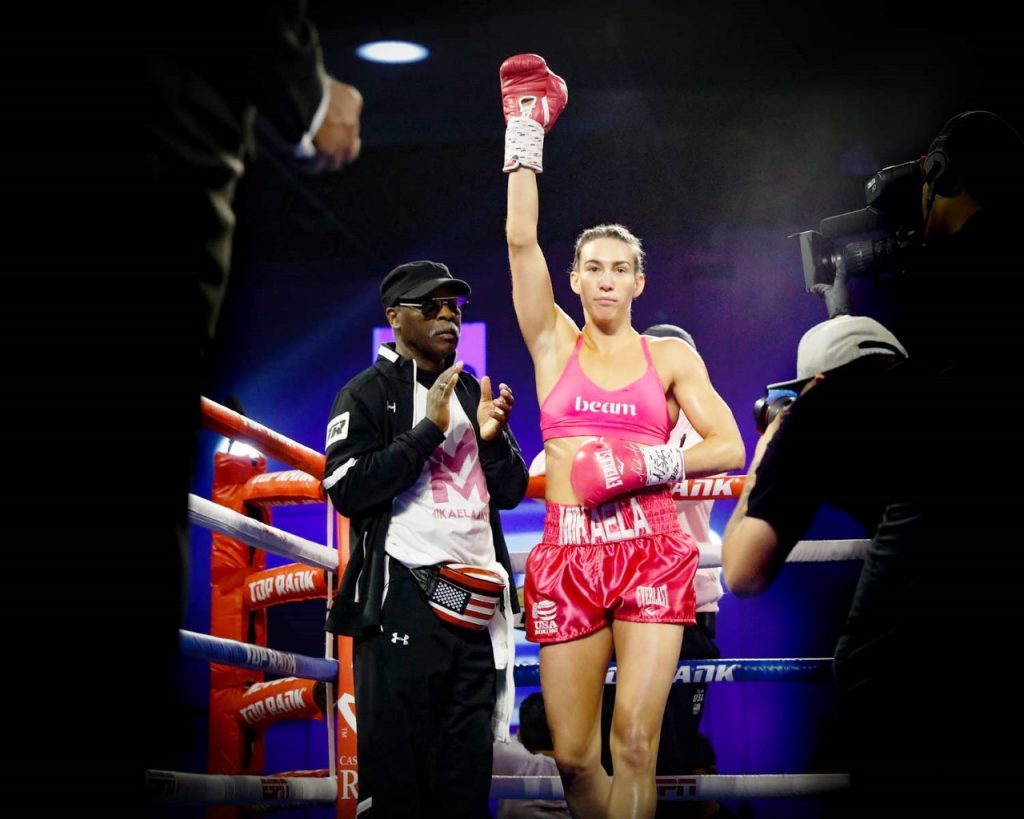 Boxing is full of tradition.  From the national anthems sung before a main event to who gets announced first between a challenger and a champion.  Here at the ThePrizeFighters.com we are no different.  With the end of the year approaching we offer our now traditional wish list for the upcoming year.

One can say the story of 2019 in female boxing was the application.  With ESPN+, DAZN and traditional networks like Fox Sports and Showtime coming out with their own version of a smart phone app, this year we arguably have seen more female boxing broadcast in the United States than ever before.  With YouTube filling the void after the fact with international fights, there is no reason a true female boxing fan has to miss any major match anywhere around the world.

We expect the trend to continue in the next 12 months and we hope more than one of these fights make it on the airwaves.

(This story was written a week ago. Some information in the boxing world may have changed)

Anyone vs Anyone – For the second year running this has been the wish for the heaviest of the weight categories.  It is no secret the talent pool is very shallow at heavyweight.  So much so that its more recognized fighter, former WBC champ Alejandra “Tigre” Jimenez, sacrificed the majority of 2018 to drop down to 168 pounds in hopes of having more competition.

Some months ago, on the all-female boxing podcast 2-Minute Round, former heavyweight champion Martha Salazar, nearly 50 years old, hinted at perhaps a comeback to reclaim what was once hers.

That would be a sight to see.

Franchon Crews-Dezurn (6-1, 2KO) vs Alejandra Jimenez (12-0-1, 9KO) – This fight, originally scheduled for this past September, is locked and loaded for the second weekend of 2020.  2019 was a memorable one for WBC champ Crews-Dezurn, retaining the vacant WBO title in a rematch against Maricela Cornejo.  That performance, as well as some appearances as a color commentator for Golden Boy Promotions’ broadcast on FaceBook, has given the 32-year-old one of the biggest profiles of the year in female boxing.

The biggest fight to be made at 168 pounds is between Crews-Dezurn and WBA champion Alicia Napoleon.  Hopefully it happens later in 2020 but first Crews-Dezurn needs to get past Jimenez.  Jimenez is an experienced undefeated fighter with something prove.  She must demonstrate her decision to shed nearly 50 pounds to the super middleweight division was the right one.

Anyone vs Anyone – In what was once one of the hottest divisions in the sport, now 160 pounds is a wasteland.  So it goes when its biggest star, and moneymaker, Claressa Shields decides to pursue history and drop to 154 pounds.  Shields is still the recognized undisputed queen at middleweight but more than likely will stay at super welterweight for at least all of 2020 looking to do what she did at 160 pounds, conquer the division.  All the other interesting names in the category, Raquel Miller, Maricela Cornejo and Christina Hammer have either gone down in weight or have not reappeared.

More than likely if Shields is forced to vacate her titles at 160 and Hammer stays, the German-based Kazak will be the one to beat.  No word yet of when Hammer will be back but somebody soon needs to make a name for themselves in the division.

Claressa Shields (9-0, 2KO) vs Ivana Habazin (20-3, 7KO) – it could really be Shields vs anyone but the two-time gold Olympic winner is scheduled to take on Habazin early in 2020 for the vacant WBO title.  With the win Shields would be well on her way in conquering a third weight division.  She did it at 168 and 160.  This fight was scheduled for the fall of 2019 but a disgusting attack on Habazin’s trainer at the official weigh-in derailed the face-off.

Does Habazin have what it takes to defeat the self-titled Greatest Woman of All-Time?

By the looks of her record, she doesn’t.  Her resume is respectable but she has never faced anybody like Shields.  The closest she has gotten is a unanimous decision loss to Cecilia Braekhus.

In a sense, the division will go in the direction Shields wants to go.  If she stays, then we should be in store for another entertaining run including a possible rematch with current WBA champion Hanna Gabriels.

If Shields decides to go back up to middleweight or venture into MMA, there are still some interesting fights in the category including our pick for 2019, Gabriels versus the IBF champion Marie Eve Dicaire.

Cecilia Braekhus (36-0, 9KO) vs Katie Taylor (15-0, 6KO) – Let’s face it, the fight between Braekhus against Layla McCarter is not happening.  Quite possibly the best time for it to have happened would have been those two fights on HBO that Braekhus was featured on in 2018.  Now Braekhus has signed with DAZN and is looking to cement her name in the sport and continue her legacy.  She is the queen bee at 147 pounds and everybody else needs to come to her.  Taylor has made it no secret she wants legacy fights as well, and with her winning a title at 140 pounds, she has inched closer to a Braekhus fight now that both are with the same broadcaster.  With Braekhus’ recent outing against Victoria Bustos still not producing a KO even with the help now of Abel Sanchez, I don’t see Braekhus making the jump to the 154-pound category to face Shields.

A fight between Braekhus and Taylor at a catchweight between 140 and 147 pounds would be one of the biggest fights in the history of female boxing.  The good thing is, it seems there isn’t anything in the way of making it happen.  Both are with the same boxing app and both have mentioned it is something they are willing to do as early as 2020.

Jessica McCaskill (8-2, 3KO) vs Mary McGee (26-3, 14KO) – There is nothing like bad blood to make a fight between two elite fighters even better.  This is the case between WBC and WBA champion McCaskill of Chicago and newly crowned IBF champ McGee of nearby Gary, Indiana. When McGee, who has had sporadic activity at best, started a GoFundMe page to get a recent fight done in her hometown, McCaskill made some alleged disparaging remarks of the situation.  McGee took offense and asked for an opportunity.  McCaskill countered with a request to bring something to the table.

Now McGee has the IBF belt.

McGee is willing to put it on the line as soon as possible against former sparring partner McCaskill.  The fight would be one of the most explosive on the recent horizon and the road to make it seems considerably easy since McGee recently signed with DiBella Entertainment.

Katie Taylor (15-0, 6KO) vs Amanda Serrano (37-1-1, 27KO) – In our list for 2019 the fight we suggested for this weight class was Taylor against the then WBC champion Delfine Persoon. That fight happened in June.  Our honorable mention was the then WBO champ Rose Volante.  That fight was in March.  Hopefully the boxing Gods are on our side again and make this fight happen in 2020.

By all measures there should be no obstacles in its way.  After signing a three-fight deal with Matchroom Boxing/DAZN, it was long considered the third fight of the agreement for Serrano would be against Taylor.

After the controversial decision against Persoon, Taylor decided to move up to the 140-pound division and capture a world title there while Serrano kept training for MMA.  As far as it is known, that deal still exists for Serrano and DAZN.  As quickly as Taylor captured the WBO super lightweight title, she relinquished it to keep her undisputed crown at lightweight intact.

The table is set for a mega fight at 135 between these two.

Delfine Persoon (44-2, 18KO) vs Mikaela Mayer (12-0, 5KO) – Is this fight too much to ask for?  After her controversial loss to Taylor, Persoon decided to shed the five pounds and make her way to the super featherweight division.  With nearly 50 fights under her belt, Persoon has beaten everybody that counts in and around 135 pounds including former and current world champion Maiva Hamadouche, Christina Linardatou, Erica Farias and Fatuma Zarika among many other world-class names.  Despite those victories, she might never face a fighter like Mayer.  Taylor, with all her Olympic and professional boxing glory, skill and talent does not have the physical attributes the tall and strong Mayer has at 130 pounds.

Mayer has been developed expertly up to this point by master Top Rank matchmakers Bruce Trampler and Brad Goodman but is still in need of a world title and more importantly, a signature win.

With Persoon’s performance against Taylor in 2018, a fight many thought she won, a win by Mayer will not only tell the Top Rank brass, more so the female boxing world, Mayer is a super star in the making.

Part II coming up next….