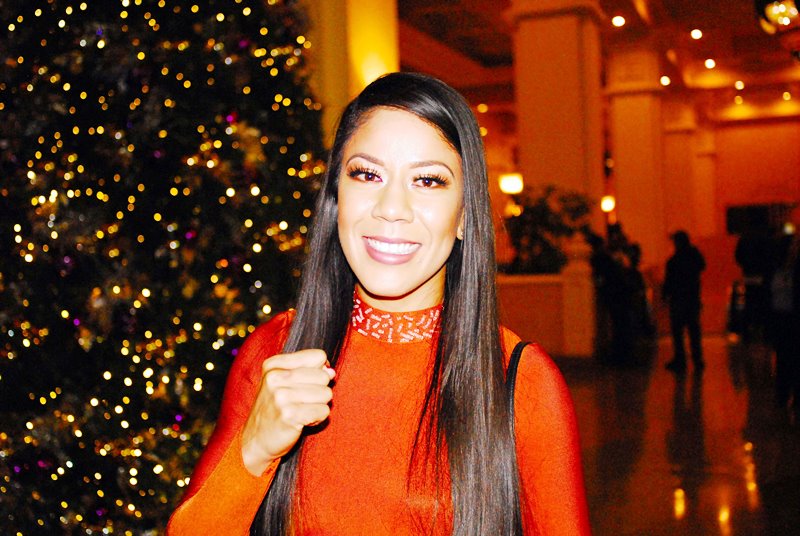 When one door closes, another one opens.  Nothing could be truer for up-and-coming flyweight prospect Sulem Urbina (11-0, 2KO) of Phoenix, Arizona by way of Hermosillo, Mexico.  Last year after defeating veteran Judith Rodriguez in Tijuana, Mexico, live on DAZN, Urbina’s contract with Zanfer Promotions ended.  She didn’t have to wait long to get another company interested in her services.

“First off, I did have a good start in the pros with them,” Urbina said recently about the Tijuana-based promotional company led by Fernando Beltran.  “I am very grateful for them having carried me to 10-0.  It came to an end because the contract ended and I didn’t wish to re-sign because I felt that I should have had a little more activity. Things just didn’t work out to work together again.  I am very thankful for the way they started me off in the pros.”

Urbina is all set to make her United States pro debut next Thursday, February 6th, when she faces off against tough veteran Noemi “Rebelde” Bosques (12-14-3, 2KO) of Florida in a scheduled six rounder in the flyweight division.  The Urbina vs. Bosques fight will be featured on a Golden boy Promotions card from the Fantasy Springs Casino in Indio, California. DAZN will show the contest.

Sulem began her pro career a little later than most since she spent a considerable time as part of Mexico’s Olympic-level amateur team.  A professional fighter for only four years, Urbina never doubted there would be another outfit interested in her being part of their stable.

“There wasn’t any doubt for me.  I think I have a pretty good following; I am pretty well known out there.  I am lucky to have a team that works very hard for me.  I feel like I do have a lot to offer.  It is not only what the company can do for you but what you can do for the company.  I feel that I am a young woman that knows how to work hard and I knew I was going to have interest on this side of the border.”

Urbina enjoys a respectable presence on social media on many platforms which helped her flourish a relationship with Roberto Diaz, Golden Boy Promotions head matchmaker, which led to a new opportunity for the fighter.

“I’ve known Roberto for a few years,” she explained. “I follow him on social media and he follows me too.  One day I had talked to him about my brother’s documentary, he had seen it, so he knew exactly who I was.  Also had seen me fight on DAZN, I had a really good fight last year in February on DAZN, I got lucky enough to be the swing bout and got to be the co-main event in a packed arena.  That was huge for me.  I also have Joel Diaz on my team which is very important and very helpful.”

“We all came together and we started talking to Roberto Diaz and my contract came to an end with Zanfer,” she continued. “We started talking and nothing really came about.  I stayed patient and one day Robert called me up for a fight.  It was kind of short notice but it was an opportunity I couldn’t pass up. I took it and I looked really good.  Things are not looking very well.  I am looking forward to my next fight, to looking great again.  We are going to be talking about a contract pretty soon.”

Sadly, Sulem’s career will always be tied to her late brother Alexis Urbina.  Alexis, an amateur standout in his own right, was brutally murdered in his home in 2013.  Sulem has honored her brother’s memory not only in her personal life but with her career.  A documentary, For You, Alexis, was produced of their story.  The last time Sulem performed in the United States in front of her parents was a day she will never forget.

“I’m going to take it back to a few years ago when I was amateur,” she began.  “In November of 2013, that was the last time my parents both saw me fight live at a local boxing tournament here in Phoenix, Arizona.  That same day as I was gloving up and warming up, the two people that had killed my brother were being pursued and eventually getting caught by the detectives. I received a call as I was warming up. The detective was telling me they had caught the first suspect and that they were on the second.  They asked to not to say anything.  It was a terrible feeling.”

“I’m there warming up, I have a sick pain in my stomach and I tell my parents, they know about it,” she continued.”  “My coach, who is also my husband, tells me that if I don’t want to fight, I don’t have to.  I decide to fight.  Right before I go into the ring the detective calls me.  He tells me the second suspect has been caught.  He tells me their names.  I go up to fight. I win.  As soon as the fight is over, I burst into tears.”

“That is the last time my parents have seen me fight.  That is the last impression they have,” she said.  “They have not seen me mature as a pro. They have not seen everything that I am capable of.  They also can’t travel to Mexico.  It is very sad my family has not been with me through this whole process.  I had an emotional pro debut and all these things. For them to finally be able to see me as a pro, to be there with me, it means a lot to me.  My family is a huge part of why I still box and I hope them seeing me triumph in some way gives them some happiness.”

Urbina, 29, hopes getting her had raised the night of February 6th can bring some happiness to her parents who have suffered so much.  “My parents aren’t the happiest people in the world and I want to show them that I haven’t given up, I am still here, I am still trying.  I want to give them a little bit of happiness that day, I want them to see me win, I want to smile for at least a few hours.  I want them to feel some sort of joy in knowing that I am still trying.”

In front of Urbina will be Noemi Bosques, a 36-year-old road warrior, who not only has fought a who’s who in the lower weight classes, but also ventured as heavy as 126 pounds to face world-class level fighters there as well.

“I have a lot of respect for her.  She’s been around.  She’s fought everybody,” Urbina stated of her next opponent.  “She never says no to a fight.  She’s fought some of the best women out there right now.  She fought Kenia Enriquez and went to a decision with her.  She fought ‘Lulu” Juarez, Sonia Osorio, all these girls I am eventually going to be fighting in the flyweight division. Sonia Osorio I was actually supposed to fight her once already.  Stepping into the ring with her, I know I have my hands full. I know I am in for a long night and I am prepared for that. I feel she is the veteran; she has the experience; I have to respect that. At the same time, I can’t go in there belittling myself.  I know I have a great amateur background and I know have put in the work.  I am very hungry.  I have to be smart.  I know I have to win; it is that simple.”

Is her pending contract with Golden Boy Promotions contingent on a win over Bosques?

“I believe so.  I believe you are only as good as your last fight so I think you always have to look good.  Obviously if I don’t look good then questions will rise.  Everything is going well. I am treated like I am a Golden Boy fighter right now. I really love it and come fight night, I just have to perform.”

Despite Bosques’ less than .500 record, she does have an advantage in experience.  Urbina feels her amateur experience is on par as well as her win over the tough Judith Rodriguez of Mexico City last February;  Arguably her toughest opponent on paper to date.

“I think Mexican fighters in general are very, very tough and I started my career in Mexico,” Urbina said of Rodriguez.  “Boxrec.com is very deceptive.  I feel that people look at records and think this girl is garbage, this girl is that, it is not like that. Us women, we will fight anybody, any time, wherever, we take opportunities to make this sport grow.  Judith was a very, very tough fight, and I believe that Noemi Bosques will be just as tough.  Obviously she has a lot more experience and she has fought at bigger weight classes.  That is why I have to be very careful. I do believe Judith was a tough test at its time but now I am off against a tougher test with a bigger eye on me so I really have to perform.”

According to Urbina the first step this year is to beat Bosques this week, put a smile on her parents face and sign a contract with Golden Boy Promotions.  After that she will be looking for some hardware to go along with her hard work.

“If you want to grow you have to take big opportunities,” she said regarding a world title bid.  “That is something that we all have talked about with Golden Boy and with my team.  Little by little we are going to be working on.  Eventually I would love a fight with the world champions.  My team wants me to take some regional titles first, smaller titles first, then move up to the championship fights.  For me, I think I am a big risk taker and if it is at 112, I am there.”