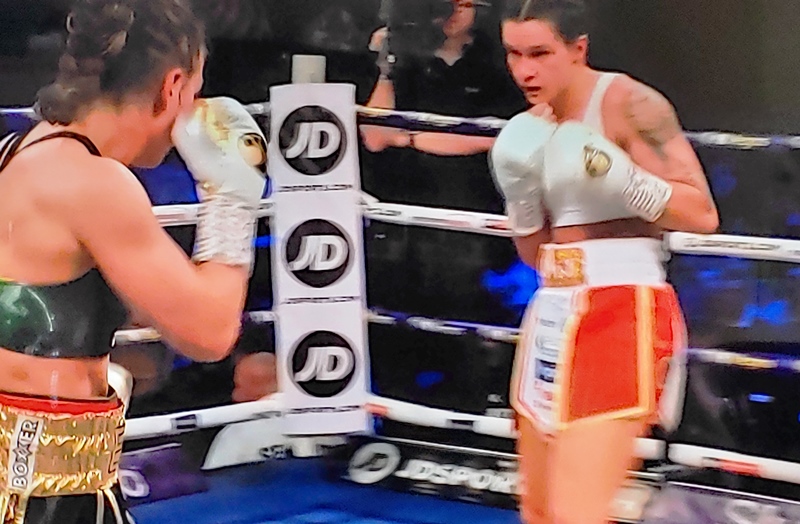 At the end of five close, action-packed rounds at Sheffield Arena, the Terri Harper – Eva Wahlstrom bout was hard to score and looked like anybody’s fight.

The second half of the battle, for Wahlstrom’s WBC super featherweight belt, was a completely different story. Even though the durable Wahlstrom was never in trouble, for a while it seemed hometown hero Harper might actually achieve her prediction about getting a stoppage before a roaring full house.

While the final scorecard margin was too wide to reflect how close much of the fight actually was, there was no doubt Harper (10-0, 5 KOs) deserved the victory.

Both boxers weighed in just a bit over 129 pounds and appeared to have gained an equal amount at the opening bell.

“It were a tough test and a good learning fight for me,” said Harper in her thick British accent. “I got caught, I got buzzed, and I had to keep my composure. I think it was in the fourth round, she dazed me. I felt my legs go a little bit and I was like, oh no, but then I went back to boxing and got my head right.”

“I enjoyed sharing the ring with someone with that much experience. It was an honor.”

Biographical stats list Harper at 5’5 and an inch shorter than Wahlstrom, but the challenger appeared considerably taller at the weigh-in and final prefight press conference. Whether that’s a matter of footwear or measurement was insignificant, what counted is how Harper maintained a straight up jabbing stance for most of the fight and made her punching distance work to near perfection.

Harper took the opening round behind her jab and established an important pattern of follow-ups. Surprisingly, Harper was also busier during inside scuffles. Some rounds were very close but it looked like Harper was doing more of what she wanted. Wahlstrom backed away and gave ground, presumably to set counter traps.

Wahlstrom stepped up and scored with overhand rights in the third. She had more success in the fourth and fifth frames. After Wahlstrom found the range, Harper backed off to adjust under pressure.

The tone of the contest was likely determined during crucial exchanges when Wahlstrom was forced to counterpunch from so far away it looked like she wouldn’t reach Harper with a yardstick.

The tide ultimately turned in the seventh session. Just as Wahlstrom bent low to spring an attack, Harper connected with a right that tipped Wahlstrom back on a glove that touched the canvas for balance. It wasn’t a damaging punch at all, but it was a legitimate knockdown and it changed the very close score

Wahlstrom smiled in protest and roared back with a solid right-left series, but Harper had seized control. Harper’s best round was probably the 8th, as Wahlstrom stumbled under the onslaught.

The 9th was relatively uneventful and few punches were thrown in the 10th. Harper landed a bigger handful of leather down the stretch but it was academic by then.

“It was a very tactical fight,” explained Harper, who may have lost a drop or two of blood from her nose but was otherwise unmarked afterward. “She was drawing me in and catching me out, so I know I’ve got a lot to learn. We’re not daft.”

Wahlstrom, now 23-3-2 (3KO), finished the match with a bruise under her right eye but remained smiling throughout. The Finnish visitor missed the post fight presser so her thoughts are unknown, but the likeable champion is probably considering how much longer she’ll stay in the sport. She’s a class act whatever the future may hold.

As for Harper, it looks like things will just get better and better after tonight’s showcase. Team Harper stated their most preferred opponent is Ewa Brodnicka if they can lure her out of Poland, and possible foes listed by trainer Stefy Bull included Heather Hardy in the US.

“Tonight’s the start of something very, very special,” said Bull.

“That was an atmosphere worthy of any main event,” claimed promoter Eddie Hearn. “We’ve got a little rough diamond in Terri Harper.”

Hearn may be the most positive force in women’s boxing. While he’s definitely cut from the cloth of hype that defines such characters, his Matchroom Boxing Promotions has also likely done more to advance the ladies’ game than other similar entities lately. Hearn doesn’t just put women on his cards. He gives them prominent placement in the schedule and on the marquee.

“We’re still playing catch up,” he said. “Where we’ve come in the past two years is incredible, but we’re still not at (payment) parity level with the men. It’s about commercial draw power and Terri has that. It’s exciting to think about how far she can go, I think we’ve only seen about forty or fifty percent of what she can do.”

“It hasn’t sunk in yet,” concluded Harper. “I’m speechless. I’m twenty-three and I never thought I get to this point. Tomorrow morning I’ll wake up and I won’t believe what happened. The belt’s going to bed with me tonight.”