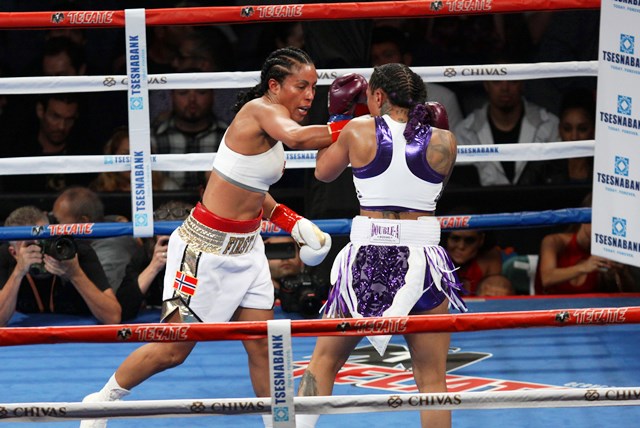 Braekhus (36-0, 9 KOs) will defend the WBA, WBO, IBF and WBC welterweight world titles against McCaskill (8-2, 3 KOs) on April 17, at the MGM National Harbor in Oxon Hill, Maryland. DAZN will stream the clash between champions.

“Negotiations for this fight started for us two years ago,” said Rick Ramos manager and trainer for McCaskill who is the unified WBC and WBA super lightweight titlist but is moving up in weight for this challenge.

Back in 2018, McCaskill was invited to spar with Braekhus but was turned down because they foresaw fighting the Norwegian fighter in the future. It was seen as a longshot at the time but subsequently things changed.

“I didn’t think it was a good idea because I kind of thought we would fight her,” said Ramos. “Now here we are.”

McCaskill, 35, captured both the WBC and WBA super lightweight world titles in mesmerizing battles with Argentine fighters Erica Farias and Anahi Sanchez to grab both belts. All three fights proved McCaskill, despite only 10 pro fights, belonged among the elite fighters in the world.

The Chicago fighter had sought a rematch with Katie Taylor but also had other targets.

“Jessica and I always wanted Katie, Amanda Serrano and Cecilia,” said Ramos. “After winning two belts I felt like if there is no rematch with Katie, we should move on to the next biggest name.”

Braekhus, 38, remains undefeated after 13 years as a professional and recently signed with Matchroom Boxing. This will be her second fight with the promotion company and her biggest challenge in a while.

“I’m very excited to battle Jessica McCaskill on April 17,” said Braekhus. “She is a unified world champion and a formidable opponent for me. However, following my victory in November I only took a short time off from training and will be well prepared for this very tough challenge.”

Braekhus has never been defeated but the last time she faced an American fighter she was floored by Kali Reis in Los Angeles. Now she faces Chicago’s McCaskill an all-action fighter who can box or brawl.

Yet, moving up a weight division especially against a talented fighter like Braekhus will pose obstacles for the shorter McCaskill.

“This is the fight I wanted. I wanted to fight the biggest names and the best fighters,” said McCaskill.

It’s going to be an April shower of blows in Maryland.