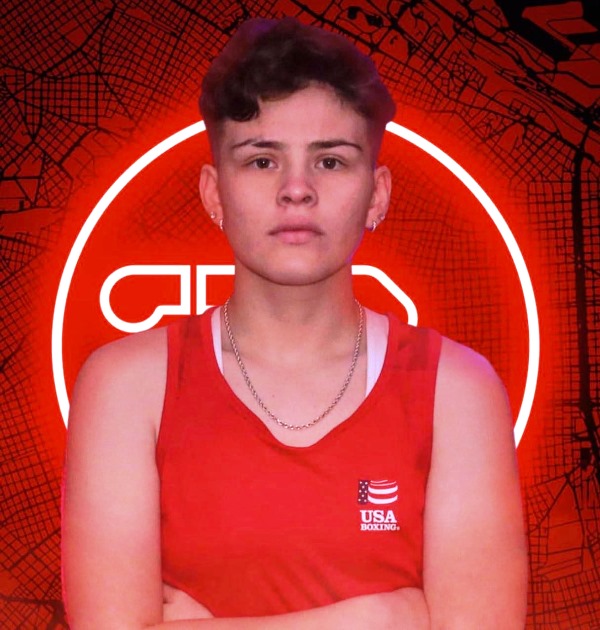 Boxing is a difficult and grueling sport.  It takes years of repetitive training for the movements to become second nature for a fighter.  Nobody knows that more than 20-year-old Andrea “The Boss” of San Diego, California.

Earlier this year it was announced Medina would be part of Team USA for the 2020 Tokyo Olympics.  She has been training for the upcoming competition in Colorado Springs, Colorado.

Medina is the first boxer out of San Diego to reach this level in amateur boxing.

Despite her young age Andrea, the middle child with an older sister and younger brother, has been boxing since the tender age of five.  Her father, Juan Medina, has been a catalyst in her career eventually taking over training duties from an early age.

“He used to box when he was younger,” Medina explained how her family got involved with the sport.  “He never went pro or anything, he had exhibition bouts but nothing to compete.  He trained a lot but he got in an accident so he couldn’t pursue his dream of becoming pro.  Once I started when I was five, he trained me and we also trained at Max Gutierrez’s gym.  Once he felt he could open up his own gym, he did that and now we are here.”

“I started competing right at eight years old,” she remembered.  “When I started boxing at five years old I trained those three years and they moved me to the Max Gutierrez gym.  One of my dad’s friends recommended it to us.  We went to go visit it and we felt it was right.  They were a good gym to get me started in amateur boxing and they did just that.  They helped us a lot and I started right at eight years old.”

“It was in Encinitas, (California),” she said of her first bout. “I don’t remember the gym but I fought a girl name Danica Lara.  I lost my first fight.  I fought her like five times and it was like 3-2.  I think she won three and I did two of the five fights that we had.”

From then on Medina continued to compete throughout the Southwest. Despite winning a lot more bouts than she lost, It wasn’t until her first trip to the Junior Olympics that it clicked in Medina’s mind she was good enough to pursue her Olympic dream.  “When I was 15 or 16 and I went to the junior Olympics for my first time. I didn’t know what it was to compete at that type of national level and when I won gold in my first junior Olympics beating the #1 ranked in the world it opened up my eyes a lot.  I thought I could actually do something with this.”

The 2012 London Olympics, the first to include women’s boxing, also motivated the then teenage Medina to look towards her own bid for Olympic gold.

“When I saw the women’s Olympic boxing in 2012 that really motivated me,” she said.  “When I was fifteen and I won that tournament, that was the only goal in my mind.”

It has not been an easy road for Medina to get to this point. Like many elite athletes, it has meant years of hard work and satisfaction but now with her ultimate dream only months away, she can reflect on what she loves about the sport after 15 years of practicing it.

“That is what I like the most,” she continued.  “You can never stop learning in the sport and its all individual, it’s only you up there.  Of course, with a team behind you but at the end of the day I am the only one that is in the ring and can accomplish that win.”

The dream got a bit closer of becoming a reality at one of the most important tournaments on her route to Tokyo.  “I think at the qualifier to get into the Olympic trials because I had taken a year off because of medical and education reasons, once I came back and went to that qualifier to get into the Olympic trials, I won 5-0, I won the whole tournament.  I got gold and I wasn’t fighting just anybody; I was fighting ranked people on the team.  Accomplishing that tournament, getting gold at that tournament, showed me that I still had it, that I was able to do it and I was more motivated than ever.”

Medina experienced a major hiccup towards being named as part of Team USA when she lost at the Olympic Trials to Lupe Gutierrez of Northern California in December of last year.

“I knew in those fights I lost at the Olympic trials that they were very close,” she said of that loss.  “I felt I had the edge. At the end of the day it was what it was.  I knew that wasn’t the end because the evaluation wasn’t only the Olympic trials but it was also to go to Bulgaria to fight in that tournament.  All that was going to be put into an evaluation from where USA Boxing would make their team.  I knew I had to do what I needed to do in Bulgaria to get that spot.  When I lost the Olympic trials, of course it was devastating, because that was my rival and because how hard I worked for that. I knew it was not over because we still needed to go to Bulgaria and perform there and I knew I could do that.”

In January, Medina traveled to Bulgaria and participated in her first International tournament where she took silver.  Medaling there sealed her place on the team and it was just a matter of time for the call to come and make it official.

“When they called I was on speaker phone with my dad and I just felt so proud and so happy,” she said of that moment.  “There aren’t any words to explain how I felt, like I said I have been working for this almost my whole life.  Now knowing that I am part of the team that was my dream when I was little, it is a real dream come true and it is not over yet, everything is going keep going up from here.”

Now Medina, who studies Criminal Justice at San Diego State University, finds herself shuttling between her hometown in Southern California and the mountains in Colorado.

“It is a big change to be out there all the time and not with my family,” she said.  “With school I do online classes and I took a semester off.  Once this is all over I am starting up again at school.  I know it is a big change but I will be back home in no time.  Doing the whole boxing stuff, it is my life.  Being able to train over there, being in camp over there, staying focused is the biggest thing so being separated from my family it really helps me to focus on what I am there to accomplish.”

Another change Andrea had to make is training without the familiar face of her father Juan in the gym.  “It is hard because he has always been with me in the corner through out my whole amateur career.   There is a point in time you have to just let go and remember all the things he taught me.  Add that into with what the coaches in Colorado Springs are teaching me as well.  It is a big change and I also have to get used to that too but I feel I am doing a good job at that.”

Soon Medina will be traveling south to Argentina with the rest of Team USA to compete in her second International tournament in order to qualify for the summer games. A win there will secure her participation in the summer games.

What comes next?  “Right now our focus is mainly on the Olympics but once this is all over we are definitely planning on going pro.”