Out of the Past: Vicious Vaia Zaganas
Written by: David A. Avila 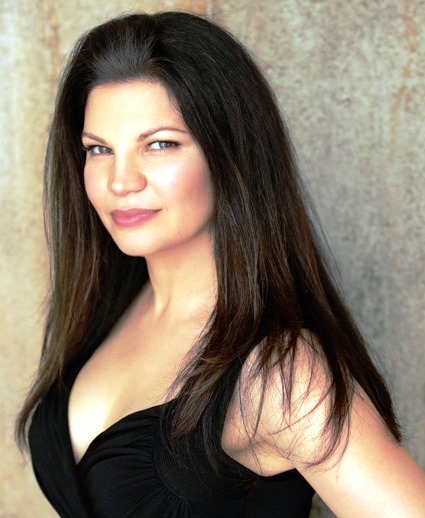 Out of the Past: Revisiting Canada’s Vaia Zaganas, Now in Hollywood

Fear of diving in the streets of L.A. forced the Canadian from Vancouver to choose a move to Las Vegas instead of Los Angeles in the early 2000s when she decided to try her hand at prizefighting.

“You know I’m pretty fearless about things but for some reason I was afraid to drive in Los Angeles,” said Zaganas. “So I chose Las Vegas to drive to from Canada.”

Once Zaganas planted her stakes in Las Vegas, it began a trek that led the Canadian to become a world champion prizefighter, stuntwoman and actress in a two decade span. It’s been an incredible journey that might have come sooner if not for the slight detour to the casino capital of the world.

As a child Zaganas always exhibited physical prowess and sought competition as an ice skater, gymnast and dancer. Later she made the transition to contact sports.

“I was training in mixed martial arts and Muay Thai. Once I began competing in Muay Thai and kickboxing, it was suggested to me by one of my instructors to cross train in boxing to improve my hands and gain an advantage,” said Zaganas about her introduction to boxing. “I started going to the local boxing club on a regular basis and I saw that there were more competition opportunities in boxing for females and especially females my size, so I crossed over. I loved the fast pace of boxing and quickly excelled at it.”

Quickly Zaganas adapted to boxing and participated in national competition and international tournaments as a 105-pound mini flyweight.

“I competed as an amateur for 4 years. I had a lot of great fights as an amateur but I have two favorite fights-   winning my final fight at my first (Canadian) national championships and beating the US national champion and hometown hero in the finals at the Blue and Gold, which was the biggest tournament in North America when I was amateur,” said Zaganas whose victory against Linda Carrillo at the Blue and Gold tournament took place at South El Monte, California in the 1990s.

In those days, the Blue and Gold tournament was the biggest amateur event in the USA and competition arrived from all over the US and some parts of the world.

Zaganas loved boxing and would often watch the professional fights on television. She realized early that she wanted to get involved as a professional and decided that she had to go to America to succeed.

She packed her bags and moved to Las Vegas with no knowledge what would happen.

“I’ve always been fearless,” she said.

One thing led to another and finally she found a boxing coach named Chris Ben who was teaching boxing at the University of Nevada Las Vegas. She began working with him. Once she settled in she quickly adapted into the professional style.

“I always had a professional style. I used to study all of the great boxers and pick up things by watching them on television or studying tapes,” said Zaganas. “My favorites were Julio Cesar Chavez, Marco Antonio Barrera, Tito Trinidad, Oscar De La Hoya and Mike Tyson. I used whatever worked.”

Zaganas stumbled in her pro debut but it didn’t deter her hopes.

“It was a split decision loss but I still think I could have won,” said Zaganas who lost to Luz Rodriguez on her debut on July 2001. Zaganas weighed 102, Rodriguez weighed 105 pounds.

The loss didn’t slow down Zaganas who became one of the busiest female professional boxers on the circuit.

She often fought on Cedric Kushner Promotional cards and was one of the few female fighters to be televised. In those matches she displayed technical prowess that was not often seen in the female fight world.

“I studied boxing a lot,” she said. “I always prided myself on my technique and doing things right.”

While most of her opposition was winging punches, Zaganas used a tight guard and perfected distance and timing in darting in and out of exchanges. As she gained more experience she got even more polished and confident. Soon she excelled.

Despite being a minimum weight fighter, she managed to score three knockouts in six pro bouts. It’s very rare for smaller weight fighters.

My first actual viewing of Zaganas in action took place on a boxing card that featured four female bouts at the Palace Gaming Indian Center in Lemoore, California on April 2003.

On the same card was Layla McCarter versus Lisa Lewis; Sumya Anani versus Fredia Gibbs; Isra Girgrah versus Laura Serrano and Zaganas versus Nina Ahlin.

The general manager of the Palace Gaming Casino was a big fan of female boxing and would often stage women’s bouts at their central California location.

That night Zaganas displayed her aggressive tactics against Ahlin who also showed technique but was unable to match the more precise combinations coming her way. They bumped heads on one occasion with Ahlin suffering a slight cut, but continued to fight. After six furious rounds Zaganas was deemed the winner by unanimous decision. The ring announcer that night was Michael Buffer who sat next to me during the boxing card and expressed surprise and excitement over the female fighter’s prowess.

All the bouts were televised.

Zaganas was among those being touted, she had captured the IFBA minimum weight world title in 2002. Back then the IFBA, WIBA and IBA were among the few who sanctioned female bouts. All were considered prestigious titles before 2004. The WBA, WBC, WBO and IBF did not sanction female boxing but would soon enter the game.

Despite being the IFBA world champion Zaganas and other female champions were not making enough money to survive.

She roomed with other fighters like Elena “Baby Doll” Reid and paying rent was not an easy chore for any women boxer. Almost all had to have other work to survive in the gambling capitol of the world Las Vegas.

“It’s hard to make a living at $1500 a fight,” said Zaganas who was one of the busiest female boxers in the world. “After paying rent and food I barely had enough to pay my bills.”

On April 2004, Zaganas became the first female boxer to capture the WBA minimum weight title when she handily defeated Stephanie Dobbs by unanimous decision after 10 rounds at Glen Burnie, Maryland.

It was the main event and would be Zaganas final fight. She was the very first female boxer to win the WBA title at the minimum weight. Despite winning the title, it was not enough to keep Zaganas from ending her boxing career.

Zaganas moved back to Canada where she encountered an old friend who was involved in acting. She began taking acting classes and also began to explore the world of stunt work. One thing led to another and after studying acting and practicing stunt work she decided to finally move to Los Angeles.

Zaganas made Los Angeles her home base.

“I was told it could take years for me to find any stunt work or acting,” said Zaganas. “I got lucky and got a call in two weeks.”

Though Zaganas has Greek and Swedish bloodlines, she can easily pass for Latina and can speak and understand Spanish. Most of her acting and stunt work has her portraying Latinas or Latina types.

She has appeared on numerous films such as Birds of Prey and has doubled for Salma Hayek, Vanessa Hudgens, America Ferrara and Alyssa Milano. She has also appeared in the Mayans, The Rookie, NCIS LA, Fear of the Walking Dead, Lucifer, SWAT and many others.

Often I’ll be watching a television show and recognize Zaganas by accident such as in the movie “McFarland USA” that opened in 2015.

Currently, Zaganas had a small part on the film depicting the life of Claressa Shields. It’s currently closed for production in Canada due to the virus but will resume when things are better.

Back in the early 2000s whenever my reporting team was in Las Vegas for a big fight we would meet with Zaganas and Elena Reid for dinner or lunch to discuss boxing and their careers.

“When I first turned pro I wish that I had moved to LA rather than Vegas as I had more connections and fan base in California rather than making the fear based decision to move to Las Vegas.….but who knows? Everything works out the way it’s meant to in the end,” said Zaganas.

Out of the Past Series

The art of boxing always included female fighters. This series is a re-introduction to some of the best women prizefighters of the past that blazed trails for those today. Stay with us as we talk to some others from the past.