Light Flyweights, Claressa and Tiara
Written by: David A. Avila 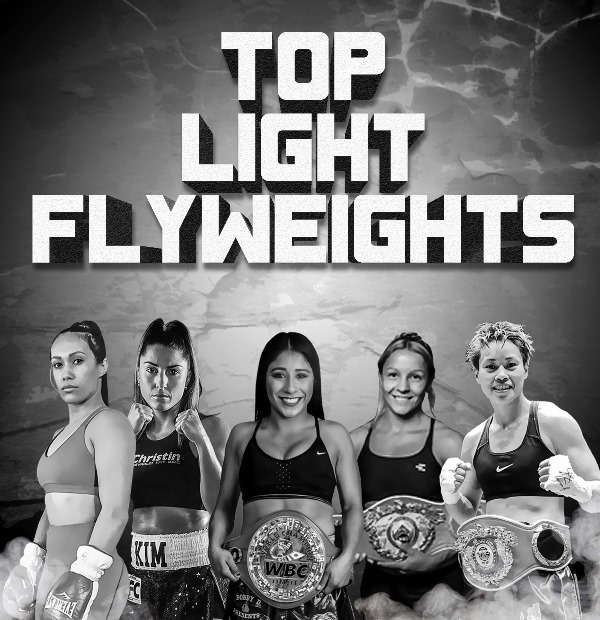 Looking at the Light Flyweights and Claressa Gets B.E.T. Nomination

Light flyweights are like a drop of nitroglycerine; tiny but dangerous.

One of the most overlooked weight divisions has to be the tiny light flyweights who soaking wet step on scales weighing under 108 pounds. Usually they can and do perform fights under 105 pounds or move up a division against 112 pound opposition.

Weight is nothing but a word to these girls.

Estrada defeated Marlen Esparza in the 112-pound flyweight division last November by technical decision. She has mentioned publicly many times her desire for meeting Anabel Ortiz the WBA minimum weight titlist at 105 pounds.

“I walk around at 107 pounds,” said Estrada in March. “I usually have to eat extra just to fight at 112 pounds because sometimes I weigh too little.”

Despite fighting opposition that includes super flyweights and bantamweights, Estrada has remained undefeated. She is not the only light flyweight capable of fighting heavier or lighter.

Enriquez, 26, has held the interim WBC title since 2017. Like Estrada, she is capable of fighting even lower or higher and has the power to blast her way through four weight divisions.

“I know I am capable and have the skills and I will demonstrate them to the world against the absolute champion,” said Enriquez in February. “And if it doesn’t happen, I will talk about losing weight and fighting Anabel Ortiz to win a third weight division.”

Across the Pacific Ocean in Japan are numerous light flyweights including Tsunami Tenkai the ferocious boxer-puncher. Despite a dozen losses the 35-year-old has learned how to coordinate her skills to become a dangerous prizefighter. Her 10-round battle to a draw against five-division world champion Naoko Fujioka is testament to her accrued knowledge. She has become a potent fighter and has always shown a fearless approach.

Argentina touts its longtime great Yesica “La Tuti” Bopp the reigning WBA light flyweight titlist whose only defeat by Mexico’s Jessica Chavez was back in June 2013. Rumors flowing out of the Pampas are that she desires to move up in weight. But a match in American against Seniesa Estrada or Kenia Enriquez could lure her to stay at 108 pounds.

Bopp, 36, has the speed and boxing skills to give anyone trouble. Need an example? The fighter known as “La Tuti” defeated current WBO bantamweight world titlist Daniela Bermudez. That remains Bermudez last defeat.

Canada has Kim Clavel a speedy skilled boxer who holds the NABF title and has wins over Mexico’s Ana Victoria Polo a veteran world title challenger and Luz Elena Martinez. But her win over Martinez came right after San Diego’s Amaris Quintana stopped her in two rounds two years ago.

Clavel, 29, needs to fight better opposition now and perhaps venture outside of Canada to find it. But it is always a danger for any prizefighter to battle in another country. Maybe a clash with Estrada or Enriquez is due.

In Germany, one fighter wowing audiences has been Sarah Bormann the undefeated light flyweight who holds several titles including the WIBF, WBF and GBU versions.

Bormann, 30, has seven knockouts and remains undefeated after 12 pro fights. She began as a pro in 2017 and proceeded to stop five consecutive foes. She has defeated experience veterans in Sanae Jah, Anne Sophie Da Costa and Lotta Loikkanen in 10 round affairs. She could be a sleeper.

It’s a loaded division with many more especially in Mexico, Japan and China which has begun entering the prizefighting arena. Because of a lack of visibility fighters like Amaris Quintana, Tania Enriquez, Chaoz Minowa, Leiryn Flores and others go unnoticed.

The light flyweights may be the most flexible fighters in the world when it comes to jumping up and down weight divisions. They simply come to fight.

Ajee Wilson, Coco Gauff, Naomi Osaka, Serena Williams, and Simone Biles are competing with boxing’s Claressa Shields for BET’s Sportswoman of the Year for the period of March 2019 to March 2020.

Wilson runs track and specializes in the 800 meter run and hails from New Jersey. Biles is an Olympic gold medalist in gymnastics and current world champion. Gauff, Osaka and Williams are all tennis stars.

Not to be prejudice, but it’s a lot more difficult to become a world champion prizefighter. You don’t run or hit tennis balls with the danger of someone killing you with a punch. What Biles does is pretty difficult. There is extreme danger in what she does on a high beam or balance beam.

To me Shields or Biles deserve the award.

Speaking of BET, this past Saturday super featherweight contender Tiara Brown was featured on a half hour segment called Gloves Off. It was an interesting look into Brown who is a Washington D.C. police officer.

Brown was honored as the 2019 DC Police Officer of the Year and talked about her involvement as a police officer and her work as a boxing youth counselor in the area. It was great exposure for female prizefighting and also showed the type of women involved in boxing.