Seniesa Estrada and the Big Bang Heard Around the World
Written by: David A. Avila 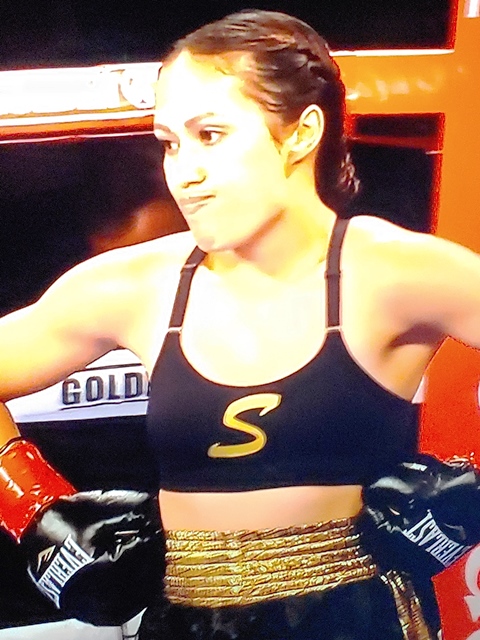 People went out of their minds when Seniesa “Super Bad” Estrada blitzed Miranda Adkins with a lightning three and four-punch combination that rendered her unconscious in seven seconds.

Cries of mismatch, fix and horror erupted from all points of the world in all languages.

Welcome to the new world of women’s prizefighting.

Estrada, a petite boxer from East Los Angeles, an area known for decades for its savage fighters, did exactly what was expected and yet it was too much for many.

Some say it’s sexism rearing its ugly head. Others say that a boxing commission allowed a powerful promotion company to have its way. Very few said that Estrada is simply too good for a grade C fighter. Miranda Adkins was undefeated and stopped every opponent. She also had a title so that at least made her a C grade fighter.

Of course, Adkins was not on the same level as Estrada. But female boxing does not have the number of fighters as its male counterpart so they allow C level fighters a chance to fight A level punchers on television.

It happens with men too.

If a male fighter such as Edgar Berlanga blows out a guy in seven seconds the world heaps praise and applause. When Estrada performed as expected the so-called experts who seldom if ever cover women’s boxing come out of the shadows to give their two cents.

One thing the fight proved is that women can hit with power. The lack of knockouts has always been a reason many refuse to watch women fight, especially in the lower weight classes.

But these last 12 months have proven that fighters below the flyweight level pack a punch. Back in Brooklyn, about eight months ago, tiny Louisa “Bang, Bang” Hawton and Lorraine Villalobos lit up the arena with knockdowns in their second confrontation. Both barely weigh 102 pounds but each pack a wallop.

Estrada’s team desperately seeks a world title match but has been unable to get its wish. Right after the knockout win Japan’s Naoko Fujioka sent out an invitation to a gunfight with the East L.A. fighter.

“Congratulations on your KO win,” said Fujioka who has won world titles in five weight divisions and currently holds the WBA flyweight world title. “However, you should have met me in the ring, not Adkins. I look forward to having a match with you when I get a VISA.”

Estrada answered back “See you soon too.”

A major reason Estrada was unable to fight Fujioka or any top female fighter was the current travel ban on fighters of other countries. Hopefully, the situation changes soon but its beyond the control of anyone at the moment.

According to Victor Conte, an expert regarding the use of performance enhancement drugs by athletes, anytime a woman uses PEDs it gives them a grossly unfair advantage. More so than it does for men.

VADA recently released a video on its Youtube.com platform about the use of supplements by athletes. It is called The Good, The Bad, and The Ugly.

For a more detailed look go to this link:

Recently, the Showtime network released its schedule of boxing events that extends until the end of the year. It did not include Claressa Shields the undefeated and multiple division world champion.

The reason Shields was not included on the Showtime announcement was because it was basically a release of those prizefighters promoted by Premier Boxing Champions. They do not promote female fighters and never have.

Shields is promoted by Salita Promotions and her details are expected to be revealed by Showtime shortly.

A looming welterweight battle takes place when undefeated Cecilia Braekhus and Jessica McCaskill meet for all the belts on Saturday August 15, on the streets of Tulsa, Oklahoma in the USA. Yes, you read it correctly. They will be meeting on the street.

The outdoor setting was an idea conceived by Matchroom Boxing to provide a safer atmosphere for the fight that pits WBA, WBO, IBF and WBC welterweight champion Braekhus (36-0, 9 KOs) against WBA and WBC super lightweight champion McCaskill (8-2, 3 KOs) in a bout set for 10 two-minute rounds. DAZN will stream the fight live.

Many predict this fight will be a Fight of the Year candidate because of their fighting styles especially with Braekhus now trained by “Mexican style” trainer Abel Sanchez.

One week later, in another outdoor setting, it will be undefeated lightweight champion Katie Taylor meeting super featherweight titlist Delfine Persoon at the grounds of the Eddie Hearn’s home in England.

The first time both met it resulted in a furious battle that ended up the Fight of the Year in 2019.

Seniesa Estrada’s quick knockout victory was not the only time I witnessed a blow out in 10 seconds or less. Back in 2002 or 2003, during the prestigious Blue and Gold Tournament in Southern California, the winners of the lightweight division and the middleweight division had both of their opponents drop out in the finals. After some discussion the fighters agreed to face each other just because. The lightweight champion came out firing and knocked out the middleweight in less than eight seconds. Her name was Elizabeth Quevedo and had there been Olympic boxing for women at the time, she would have been a name known by everyone. That girl could bang.