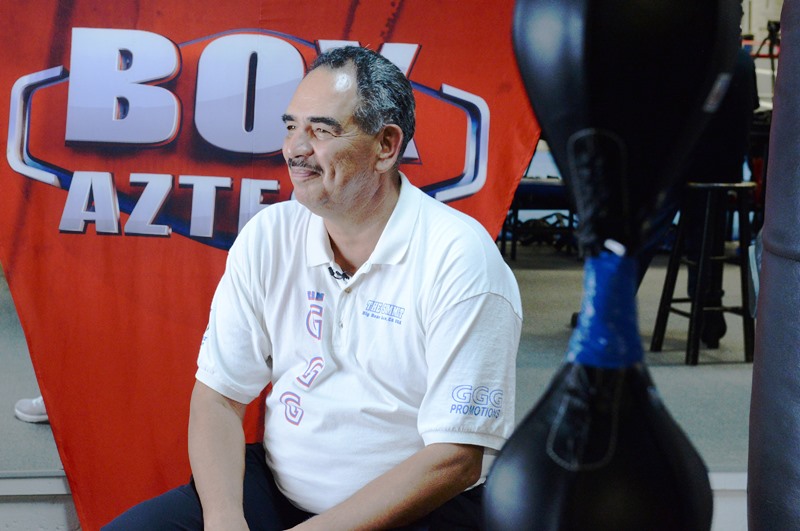 Despite the leaps and bounds female boxing has made in recent years, there are still many veteran trainers all over the world who refuse to train a female fighter.  One that has come around is Abel Sanchez.  The recognized elite boxing trainer is now the chief second for the undisputed, undefeated and unified welterweight world champion Cecilia “First Lady” Braekhus.

Braekhus (36-0, 9KO) is all set to defend her titles on Saturday, August 15th, against the current unified WBA/WBC super lightweight world champion Jessica McCaskill (8-2, 3KO).  The fight will be the main event from an event broadcast live by DAZN from the near empty downtown streets of Tulsa, Oklahoma.

“I had never trained females before,” Sanchez said recently in an exclusive interview with the 2-Min Round, the all-female boxing podcast.  “Cecilia is the first I have trained in this manner.”

Sanchez mentioned before Braekhus hit his gym, he did not have much interest in women’s boxing because the thought of training a female fighter had never crossed his mind.

“It wasn’t something that was on my radar,” he explained.  “I had enough to deal with the fighters that I had.  It was an easy transition because I didn’t get a girl in my gym I got a fighter. She trains like the guys; she runs like the guys, she cusses like the guys, so it was easy to train her because she is a guy in a woman’s body.  She is very feminine, obviously, but she is the kind of fighter that wants to win and wants to be the best she can be.”

One thing in Cecilia’s career that is not like the guys’ is the amount of time she is allowed to fight inside the ring.  Braekhus as a woman competes for two minutes per round while the men for three minutes.

Sanchez has a unique perspective regarding the difference.

“One thing people need to understand is the amount of female fighters is limited,” he said.  “So if you start putting three minute rounds and you start eliminating fighters because they get hurt because the round is too long and they are not used to it or they get knocked out or cut because it is longer and they are tired and they are not performing at their best, then you are going to eliminate a major portion of the ranks, of the ladies that are fighting.”

Sanchez did make it point to state that once the ranks of female fighters increases in the future, he would be all for increasing the rounds to three minutes.

“it is not that they can’t do it, Cecilia fights for four minutes in the gym,” he reiterated.  “Some of them can but the ones that can’t are the ones you are going to eliminate and unfortunately they are not going to go on with their careers for that reason.  I think that in the future if we have a bigger talent pool, then it is very possible.

The 65-year-old Sanchez, originally from boxing hotbed Tijuana, Mexico, moved with his family to the Los Angeles area at six years old and in his teens began as a kick boxer.  He quickly made his way to legendary southern California trainer Ben Lira’s gym in El Monte, CA.  When Sanchez’s day job, he was a general contractor at 19, began to get in the way of his boxing training, he decided to become Lira’s apprentice.

By 1987 Sanchez had his first world champion in Lupe Aquino who captured the WBC super welterweight crown that summer.  Soon Terry Norris and Orlin Norris were crowned world champions and later Miguel Angel Gonzalez, Murat Gassiev and Gennadiy Golovkin among others.

To date Sanchez has trained close to 20 world champions.

“Obviously the men have a longer history and are much more on the forefront,” he continued.  “I am not going to say more talented because the women are very talented also, but just more on the forefront.  I think women’s sports or women’s boxing has been relegated to second position when it shouldn’t be.  There are some exceptional fighters.”

The fight against McCaskill will mark the second camp in a row Sanchez has worked with Braekhus.  The first was in preparation for the late 2019 fight against Argentinean Victoria Noella Bustos in Monaco.  Braekhus won that fight via a lopsided unanimous decision.

During the camp prior to that match Sanchez and Braekhus worked on making the 38-year-old world champion more aggressive and prone to end the fight by knockout.  Sanchez calls it the “Mexican-style”.

“The process was that in the beginning when I started with her, she had a European kind of style, throwing punches and hold, box upright, a very European style,” he explained.  “When I tried to do the first fight, I didn’t want to change too many things, I didn’t want to confuse.  She hadn’t fought in over a year, she hadn’t been in the gym, and she was coming back a little rusty and a little heavy.”

“My goal for the first fight was to obviously get her in shape and get her weight down,” he continued.  “I just wanted do a couple of tweaks.  I didn’t want to confuse her. This time around, unfortunately because of Covid, we’ve had some time so we have been able to work on things I always teach my guys and work with my guys.  She has caught on and she will be a different fighter.  She believes in the system, believes in what I show her and believes in what we are doing and I believe she will show that on the 15th of August.”

On that night, Sanchez says Braekhus will be facing perhaps her toughest opponent since the summer of 2018.  That night two years ago she fought the tough Kali Reis live on HBO.  In the seventh round of the highly contested bout Braekhus touched the canvas for the first time in her pro career.  She won the fight with a somewhat controversial unanimous decision.

This time she will be in the ring with a tried and true world champion who despite her lack of experience makes it up tenfold with her hunger and determination.  Two attributes she has put on display in her hotly contested loss to Katie Taylor, her two wins over Erica Farias and her win over Anahi Esther Sanchez.

“I think every one of Cecilia’s opponents want to take her head off, they want to take her belts,” he said.  “They want to become champions and we are expecting that from Jessica McCaskill.  I’ve always been the kind of coach that trains my fighter to be the best fighter he or she can be.  It doesn’t matter what the other fighter brings, it doesn’t matter what Jessica McCaskill brings to the ring.”

Sanchez assures that with the extra time spent in his gym in Big Bear, CA, Braekhus has been here since early 2020 waiting for the fight, we will see a totally new fighter.

“You are going to see a fighter with my kind of style, an aggressive fighter wants to take your head off,” Sanchez stated.  “It won’t be the same fighter you saw in Monaco.”

To listen to the whole unedited interview, please visit BlogTalkRadio.com/2MinRound