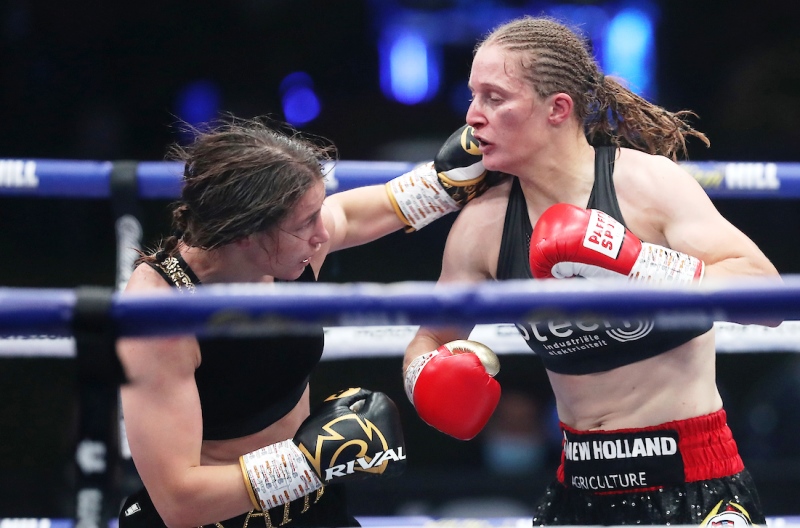 Ireland’s Katie Taylor can finally say that she indeed is the undisputed lightweight world champion after defeating Belgium’s Delfine Persoon by unanimous decision in their rematch on Saturday. It was gritty once again.

“I knew it was going to be a tough battle going into this fight,” said Taylor. “It’s never going to be an easy fight against Delfine.”

Slowly but surely Taylor has been picking up the professional style of fighting with each contest. Against the pressure style of the Belgian fighter the Irish warrior showcased more polished abilities to slip and move without running and holding.

It was a different fight altogether from their first encounter of 14 months ago.

The Irish Olympic gold medalist and undefeated world champion entered this fight with vengeance in her heart and determination to prove she was indeed the superior fighter.

Every time Persoon tried to close the distance Taylor slipped under the oncoming blows and countered with sharp lefts to the body and rights to the face of the Belgian fighter. After the second round Persoon went back to her corner with her nose tilted to the right and an angry looking cheekbone. Taylor’s face was barely touched.

Still, Persoon never quit and had her moments using her wild child style of fighting that enabled her to catch Taylor with her long rights and lefts when she thought she was out of reach. Against Persoon, an opponent is never out of reach.

“Even though I hit her with clean shots she is on attack at all times,” said Taylor, 34. “That’s why it’s such a tough fight all the time.”

For a long stretch it appeared that something was wrong with Taylor’s right hand. She rarely used it for several rounds. Persoon was able to close the distance and had a great round six.

Suddenly it seemed that maybe Persoon would change the momentum for good during the next few rounds.

But in the last two rounds Taylor began to utilize the formula of her earlier frames and began snapping sharp one-twos and giving angles. Persoon retaliated but was not as busy as the Irish fighter.

The final round saw Taylor slip and fire quick combos and work the body while seldom unleashing more than three blows at a time. That provided separation for the two fighters until Persoon rallied late in the round. But it was too little and too late. One judge scored it 98-93, and two others 96-94 all for Taylor.

“I boxed her a lot better than I did last time,” Taylor said. “That’s what got me there in the end.”

“I respect the decision. For me, the weight was a little bit too much. For me I felt I did not have enough power this time,” said Persoon after the fight. “She is technical, she is good and runs around and you have to hit at the right time. This time I did not do enough. My respect this time. I got no problem with the decision.”

Taylor’s win makes her the undisputed lightweight champion of the world, even in Persoon’s eyes.

But surprises never cease when it comes to prizefighting. Instead of meeting Cecilia Braekhus, it will now be Jessica McCaskill who defeated the formerly undefeated and undisputed welterweight world champion.

Will plans remain in place?

Anything can happen in prizefighting.