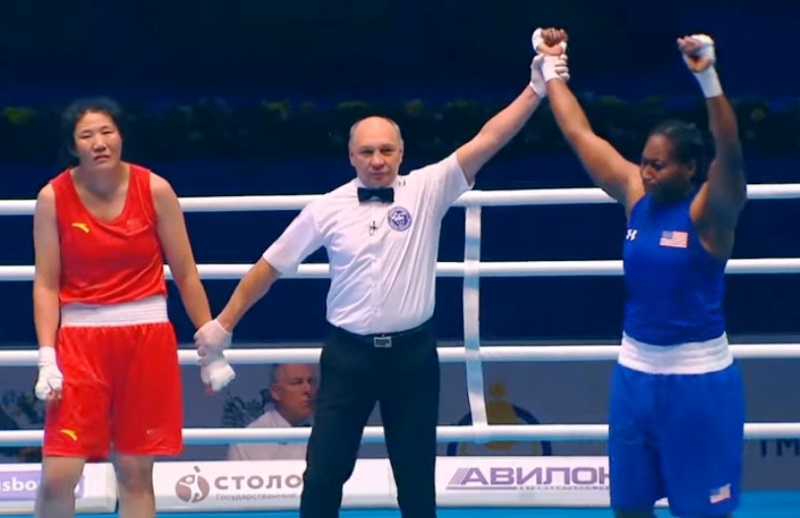 A new player Danielle Perkins has entered the professional fight world and is now backed by Mark Taffet Media it was announced on Tuesday.

Perkins comes with a gold medal attached and golden dreams of winning the heavyweight world title as a professional. Don’t bet against her.

Last month Perkins made her pro debut at Kronk Gym under Covid-19 precautionary conditions and won by unanimous decision. Watching her with intense interest was Taffet who knows a thing or two about prizefighting.

“I literally jumped up and down,” said Taffet watching the televised fight and seeing Perkins win her pro debut against Monika Harrision who was previously undefeated after three pro fights. “I could see the future of the heavyweight division.”

It hasn’t been a rosy path for Perkins who previously played collegiate basketball and professional basketball too. But a savage car accident left her badly impaired for half a decade. After years of rehabilitation the athlete’s relentless pursuit of health led to a return to sports.

“I had always loved boxing and used to like watching it,” said Perkins who though in her 30s decided to try amateur boxing.

In 2018 she won bronze in the amateur world championships then won gold at the same championships in 2019 in Russia. She was awaiting the Tokyo Olympics when the coronavirus epidemic crippled the world as we know it.

Bye, bye Olympics and welcome to the world of prizefighting.

Though 38 years old, the Brooklyn native was adamant in establishing a game plan toward her dreams of becoming a world champion boxer. She signed with SBG Management and now with MTM.

“I always plan out what I’m going to do and accomplish it,” said Perkins citing her accomplishments as a basketball player for St. Johns University and playing professionally overseas. “I also planned to become an Olympian and was headed that direction.”

The Covid-19 pandemic changed her dreams from capturing Olympic gold to now winning a green and gold belt as a professional world champion.

“My dream is to win the WBC belt as a heavyweight,” said Perkins who fights as a southpaw and trains in Houston, Texas with James Cooper. “Then, after I win that, I want to unify all the titles.”

Few know better than Taffet on how to accomplish that goal.

“We’re going to work quickly to help her reach her goals,” said Taffet who guides the career of super fighter Claressa Shields and other standouts like Hannah Rankin, Patricia Berghult, “Shogun” Ergashev and others.

Perkins admires the career of Shields and has long watched her meteoric climb to the top of the professional ladder.

“Women’s boxing is really doing well now and people are starting to notice it because of Claressa Shields and Katie Taylor,” said Perkins. “I want to be a part of it.”

Taffet feels that a talent such as Perkins will draw more athletes into the heavyweight division just as his star athlete Shields did in the lower weights.

“Claressa was able to bring a lot of interest to divisions that did not have any before,” said Taffet. “I think Danielle has the same attraction.”

Perkins pro debut showed off her power and intensity despite starting late in boxing.

“She has star quality,” said Taffet. “She exceeds expectations.”

Expect the heavyweight division to ramp up.