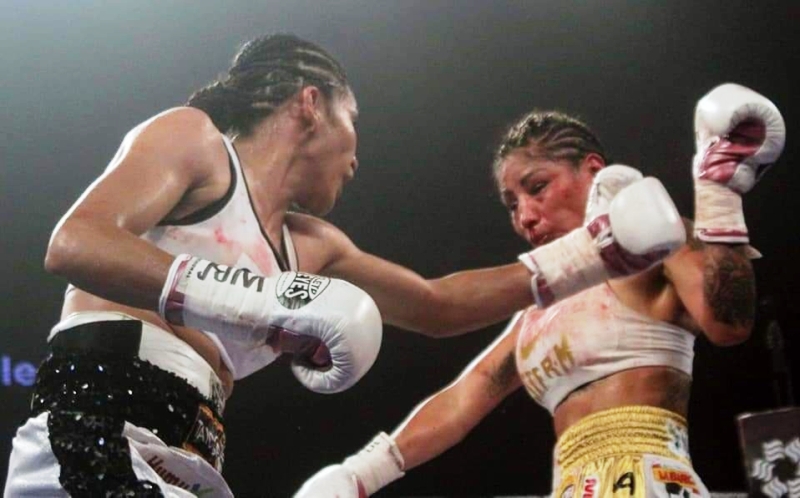 It’s inevitable for a boxing legend to overstay their welcome and get old overnight.  It happened this Saturday night from the Oasis Arena in Cancun, Mexico, when former IBF super bantamweight world champion Yulihan “Cobrita” Luna (20-3-1, 3KO) ruined any plan 40-year-old Mariana “Barbie” Juarez (54-10-4, 18KO) had for her immediate future inside a ring winning a lopsided unanimous decision over ten rounds.

Before the fight, Juarez mentioned with a win here, which would have been the tenth defense of the title she has held for three years, she would like to face long-time rival Jackie Nava and go up to super bantamweight and challenge Yamileth Mercado for the green and gold WBC strap.

With the win Luna snaps an 11-fight winning streak by Juarez but more importantly she captures the WBC world title at 118 pounds.

“I am very happy,” an emotional Luna said seconds after the result was announced.  “It has always been my dream to be a WBC world champion.”

The fight was not free of controversy.

After the seventh round, with her face bloody and swollen from the unrelenting attack from Luna, Juarez complained to her corner to check her opponent’s gloves after the fight since she suspected something was awry, Luna’s punches were just too hard.

From the opening bell, Luna’s focus and determination was evident as she kept the fight at the middle distance using her slight advantage in height and reach to land hard combinations to Juarez’s face. The 26-year-old Luna was also the far quicker of the two and near the end of the first stanza busted Juarez’s nose.

Throughout the fight Juarez just couldn’t gauge the distance as Luna with ease darted in and out landing hard punches to the head and to the body.  As her nose kept bleeding and her eyes began to swell, Juarez had no incentive to exchange and looked to feint to see if she could trick Luna into making a mistake.

Luna was not swayed by Juarez’s constant twitching in front of her and kept working her jab to follow up with a fast and hard straight right hand that ruined Juarez’s face.

By the fifth Juarez was out of answers despite switching guard from lefty to righty and feinting, Juarez was not presenting a fight whatsoever.  Luna, cool, calm and collected, just kept working getting closer to her second world title in as many divisions.

Luna scored a textbook perfect left hook to the liver to open up the seventh that stopped Juarez in her tracks.  As Juarez tried to close up the distance, Luna met her straight on with hard punches to both the body and head.  Juarez hesitation became more evident as the fight got older.

Juarez picked up the pace a bit in the 8th round but she was off rhythm and out of distance, the punches she did throw were too short making it even easier for Luna to counter.  By now her face was just a swollen red mask giving her trouble not only to breathe but to see.

In the ninth Juarez spit her protector out looking to catch her breathe.  It became evident Juarez just wanted to finish the fight because she gave an emphatic no when her corner asked if she wanted to stop while putting her protector back in her mouth.  Luna was unphased as she quickly went back to work landing combinations from the middle distance.

Surprisingly Juarez came out with a slight second win in the tenth and final round, attacking Luna and even trapping her against the ropes for a split second and landing two body shots.  Giving the final push of the fight, perhaps of her career, Juarez stopped feinting and attacked Luna risking a knockout loss.  Luna, possibly showing too much respect for Juarez, only slipped the punches from Juarez and hardly countered like she did in the previous nine rounds.  Juarez ended up throwing more punches in the last round that she did in the whole fight.

Before the official cards were read, Juarez’s corner insisted in inspecting Luna’s gloves despite the fight falling under the WBC world title protocol where the gloves stay with the bout supervisor overnight but also put on and taped with a supervisor present.

“I have been doing this for 21 years and I know something is going on,” Juarez interrupted during Luna’s post fight interview.  “You won but I want an investigation by the WBC.”

“Whenever she wants, I will give her the rematch,” Luna continued.  “We didn’t do anything to the gloves or wraps. They are there and they can inspect them.  This is from hard work.”