Prizefighter of the Year – Jessica McCaskill; plus more
Written by: David A. Avila 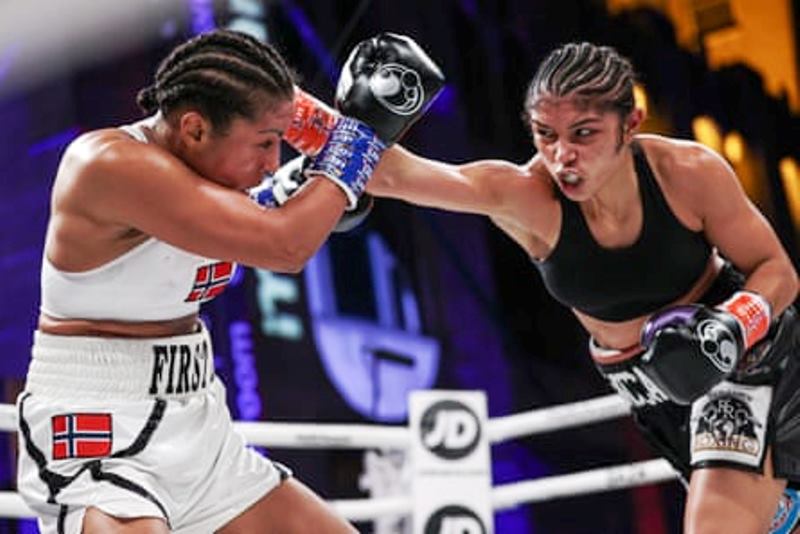 Best in Prizefighting in 2020 – Jessica McCaskill and More

It was a crazy year and despite the problems of the world some of the elite women prizefighters were able to share their talent.

Here’s a look at some of those best moments.

Prizefighter of the Year

When it was announced that Jessica McCaskill was moving up another weight division to challenge undefeated Cecilia Braekhus for the welterweight world championship, it was seen as a mistake on “Caskilla’s part. It was also seen as a mere tune up fight for Braekhus who planned to meet Katie Taylor later in the year.

People predicted a mismatch and they were wrong.

Chicago’s McCaskill got down and dirty against the refined boxing skills of Norway’s Braekhus and turned the welterweight match into a street brawl. It was only fitting that the match took place outdoors literally on the surface streets of Oklahoma City.

It was not pretty.

McCaskill began her career as a lightweight prizefighter. But when offered a match against WBC super lightweight world titlist Erica Farias she accepted it and beat her down…twice. And when a match with the heavier and pound for pound best Braekhus was offered, she jumped at the opportunity.

No one out-prepares McCaskill. She pounded her way inside the longer reach of Braekhus and smothered most of the counter blows to convince two of three judges she was the winner.

It shocked the boxing industry.

Look at it this way. If Katie Taylor had been first to defeat Braekhus she would have been deified. But with McCaskill surprising the world, she hasn’t received the recognition she deserves.

This is a fighter who lost most of her amateur fights and was the first to give Ireland’s great Taylor a competitive fight. Fans and experts should not be surprised that McCaskill now holds the undisputed welterweight world titles. She is a real fighter and this year’s Prizefighter of the Year.

Prize Fight of the Year

Elin Cederroos vs Alicia Napoleon-Espinosa – It happened at the beginning of the year when Sweden’s Cederroos met America’s Napoleon in a unification clash for the IBF and WBA super middleweight world titles in Atlantic City. The tall Cederroos floored the much shorter Napoleon with a left hook in the second round and it looked like a wipe out. From there on a real fight took place as Napoleon rallied and Cederroos fought back in the best fight of the year. Cederroos is now the unified titlist and looking to meet Franchon Crews for the undisputed super middleweight championship in 2021.

Upset of the Year

Runner up – Lourdes Juarez beats Guadalupe Martinez – the younger sister of Mariana Juarez moved up a weight division and toppled the reigning champion convincingly in Mexico.

Knockout of the Year

Etsuko Tada KO of Ayaka Miyao – It was a battle for the vacant minimumweight world title and saw Tada fire a crisp, quick left to the chin of Miyao and down she went for the count. The punch was perfect and the knockout gave Tada the world title. It doesn’t get better than that knockout that happened on December 3, in Tokyo, Japan.

Shannon Courtenay KO – A perfectly timed right by Courtenay spun Dorota Norek around and to the floor for a spectacular knockdown. Norek got up but the referee waved the fight over December 4, in London, England.

Promoter of the Year

Eddie Hearn – the head of Matchroom Boxing was one of the few promoters able to move forward despite the coronavirus epidemic. He also was smart enough to realize that the female prizefighters were willing and able to fight despite strict conditions. Much of the world benefitted from his foresight. Women prizefighting does have a large audience and grows bigger by the day. Congratulations to Hearn. Great work.

Seniesa Estrada – whenever this diminutive fighter with a big punch enters the ring you can expect to see a current of excitement. No other prizefighter has the audience riveted knowing that if you blink, you might miss what is coming next. She has extraordinary speed, skill and power and combines that with a willingness to shock the boxing world with her talent. Her seven-second electrocution of Miriam Adkins last summer was a perfect example of her talent. A week after the fight her sizzling knockout attracted more than a million views on YouTube.com.

New York-based Fei Faiva had the busiest year of anyone. Her first pro bout was in September and just last week fought in her fifth professional bout. That’s one busy fighter.

A number of elite fighters saw little or no action. All of these fighters will have gone more than a year without a fight before they step in the boxing ring again. Fans want to see these fighters perform soon:

Ellie Scotney -England’s super bantamweight was a sensation in her pro debut. She looks like a veteran and could be a future world champion.

Fei Faiva – The New Yorker had more fights than most men or women and made the most of them. She is aggressive and eager to make an impression.

Gabriela Celeste Alaniz – Argentina’s flyweight sensation recently stopped one of the Bermudez sisters and has given a couple of fighters their first loss.

Merari Vivar – The California bred fighter made her debut after a successful amateur career. Her style is more suited for the professional prize fighting world. Watch her.

Danielle Perkins – The Texas fighter is one of those rare heavyweights who had a solid amateur boxing background. So far, she is two for two in fights and knockout wins.

Viviane Obenauf – arrested on suspicion of murdering her husband in Switzerland.

Maiva Hamadouche – world champion beating up amateurs to be on the French Olympic team.

Yesica Bopp – world champion beating up amateurs to be on the Argentina Olympic team.