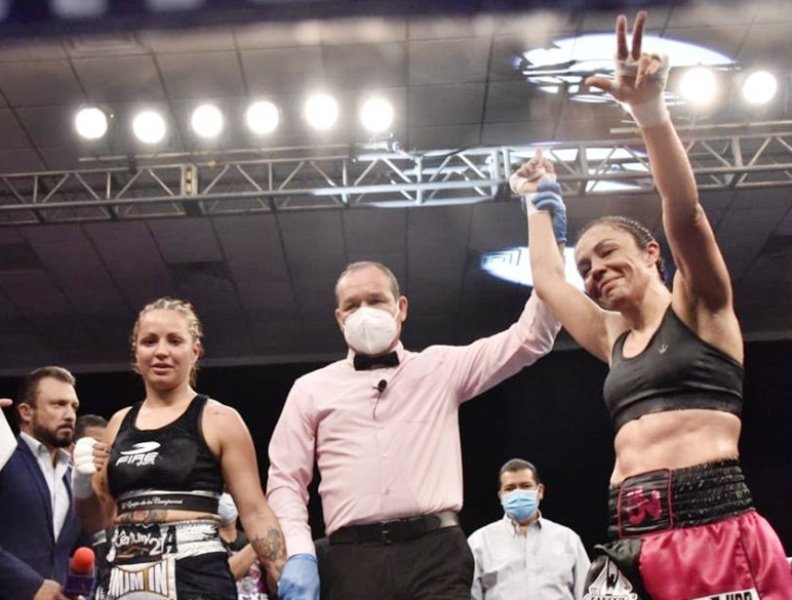 Age is meaningless as long as you are winning.  That seems to be the case for 40-year-old Jackie “Aztec Princess” Nava (37-4-4, 16KO) continues to easily defeat opponents much younger than herself.  This past Saturday night, the Tijuana Mexico, native scored a dominant unanimous decision over Karina “La Bella” Fernandez (14-6-1, 3KO) over ten super bantamweight rounds. The fight was the main event broadcast live on the Azteca channel from Tijuana, Mexico, behind closed doors with no audience due to the Covid-19 pandemic.

The bout marked the third for Nava during the pandemic with the first back in July of last year, against Estrella Valverde, documented as a No-Contest despite Nava announced as the winner via unanimous decision.   That fight was held in Mexico City with no official commission sanctioning the bout. Four months later Nava defeated Marisol Corona also via a unanimous decision.

Karina, the older sister of Diana “La Bonita” Fernandez, fought twice in 2020, the first dropping an eight-round unanimous decision to Victoria Torres Canul and back in December the 30-year-old scored a unanimous decision against Maria Guadalupe Vera.

Fernandez of Ciudad Juarez, Mexico, began the fight as the busier of the two utilizing her jab to control the distance.  Nava had trouble getting passed the constant attack of her opponent.

The Ciudad Juarez fighter kept pushing the action, but Nava was the more accurate of the two landing the harder punches.  Fernandez began to wing huge wide punches looking to score a big punch.

By the third round Nava began to turn the tables and was the more aggressive of the two.  Nava threw more punches while Fernandez tried to keep up with Nava’s output.

Despite being the bigger fighter of the two, Fernandez was having trouble keeping up with Nava’s quicker hands. In the sixth Fernandez began to push a bit more but did not read her distance well giving Nava opportunities to score with quicker punches and to start the seventh, Nava scored with a short right-hand flush to the face of Fernandez that pushed the “La Bella” back.

Nava took control of the second half of the fight scoring more often.  Fernandez never let up despite Nava making her miss and making her pay with sharp and quick combinations to the body and head.

After the decision, Nava officially called out Yamileth Mercado, the current WBC super-bantamweight champion, who was one of the featured commentators on the Spanish-language Azteca channel.

One of the most anticipated fights of 2021 ended in anti-climactic fashion when an accidental head butt opened up a deep gash over the eye of the current WBC interim super flyweight world champion Sonia Osorio (14-7-2, 3KO) in the first round against undefeated challenger Adelaida “La Cobra” Ruiz (9-0-1, 4KO).  It was declared a technical draw. The bout was the main event of a fight card presented by Grito de Guerra Promotions in association with Marvin Nation from Nuevo Vallarta, Mexico.

The event was broadcast on Pay-Per-View by FightsNight.com.

“For me it felt like a loss,” a disappointing Ruiz said after the fight.  “I didn’t come out with the result I wanted.  In my nine fights, I have never suffered a head clash like that.  It was a draw; I want a rematch.”

With both fighters throwing punches from the opening bell with all-out action in the center of the ring.  Ruiz, 32, landed jabs first taking advantage of her reach.  The 28-year-old Osorio was not hesitant in lunging in from the outside despite Ruiz catching her as she came in.  Near the end of the first stanza and during a heated exchange Osorio was cut over her left eye which began to bleed profusely.

The second round began with the referee taking a point from Ruiz due to a ridiculous WBC rule which penalizes the fighter who comes out unscathed from an accidental head clash.

The fight continued with Ruiz scoring with faster hands.  Osorio kept jumping in from the outside with Ruiz catching her with short hard punches when she wasn’t using her jab to gauge the distance.  Ruiz scored with a quick jab followed with a straight right hand to close out the round.

As soon as the round ended, the ringside physician jumped into Osorio’s corner and began to work on her left eye.  After careful consideration, he advised the third man in the ring to wave off the contest which he did.

“Whenever she wants the rematch, I am ready” Osorio stated after the technical decision was announced.  “The doctor said I couldn’t come out, I trained hard and was ready for this fight.  She can have the rematch whenever she wants.  The title stays in Mexico.”