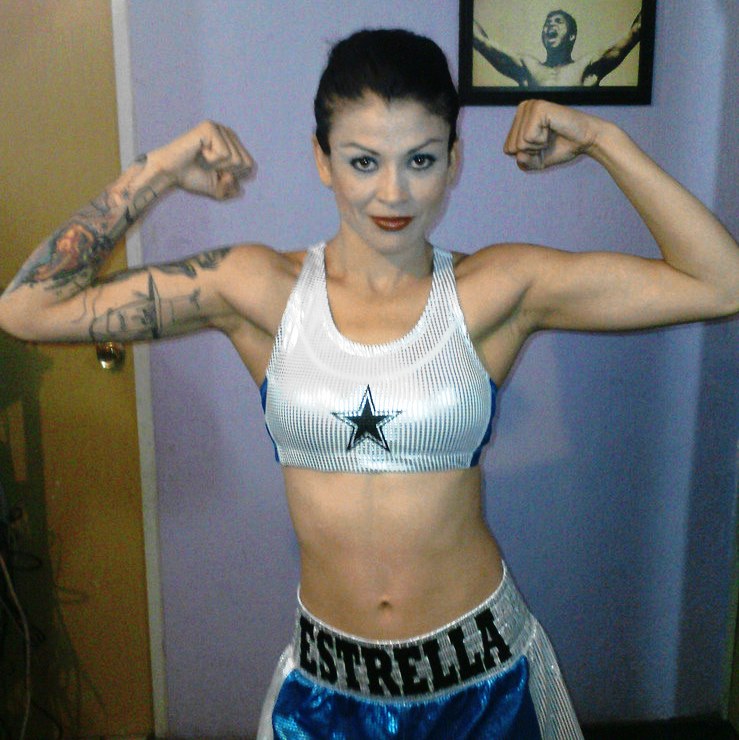 Many might believe the hardest decision for a professional boxer is to actually climb into a prize ring armed with only a pair of gloves and a dream.  Speak to enough of them and they will tell you that is the easiest of them all and the most difficult is when they decide to hang up the gloves.  At times the decision comes swiftly after a tough loss or a series of them but for 39-year-old Isabel “Estrella” Millan (29-7-1, 9KO), it had been brewing for quite some time.

“Slowly I began to lose my passion for boxing,” Millan said recently from her hometown of Culiacan, Sinaloa, Mexico.  “Being in the sport you begin to see behind the curtain and realize it is a business.”

After earning a law degree and finishing up a successful softball career as a pitcher and first base, Millan found herself in Guadalajara, married for a second time and with three daughters.         After seeing the growth of female boxing on Mexican television, Millan at 27 years of age decided to give it a go to not only stay in shape but to nurture her competitive nature.

“I had practiced combat sports in the past, taekwondo and others so I was familiar with close combat,” she explained.  “I just went to the gym.  My first trainer, Miguel Angel Rangel, he played a big part in my career.  He taught me all the fundamentals and actually made me realize you could just train boxing for fun but I always had the intention of going as far as a I could with it.”

Soon Millan, known for a relentless come-forward style, found herself fighting under the banner of Canelo Promotions for her first 15 fights.  Once the opportunities dried up with her first promotional company, she received a phone call that would change her life.

Promotor and trainer based out of Monterrey, Mexico, Jose Antonio Hernandez, better known in Mexican boxing circles as “Charro”, had seen her fight and decided to contact her to work together.

After capturing the vacant WBF International flyweight title in the summer of ’15 under the tutelage of Hernandez, Millan found herself in France in April of 2016 challenging for the WBF world title and winning the strap with a unanimous decision over the local favorite Amira Hamzaoui.

“That night was the best of my career,” she said of her first world title fight.  “I was motivated, strong, with a spark.  I could have beat anybody that night.”

Unfortunately, the best night of her life led to a nightmare when problems with her husband arose from her growing career.

“He told me, I married Isabel, not ‘Estrella’,” she said.  “He basically told me if I left for France for that fight, not to come back.  So, I didn’t.  I moved to Monterrey to continue my career.”

Her three daughters decided to stay with their father.

“They were very close to their father and he made me look like the bad one,” Millan explained.  “I didn’t want them to leave their hometown, their school, their friends.  I knew what it felt leaving your hometown like I did when I left Culiacan.”

According to Millan, with the move to Monterrey came her bouts with depression and the seed of discontent with the business side of the sport was planted.  For the last two years Millan had been contemplating her retirement with that seed slowly fermenting in her head.  She kept postponing it because she needed the money earned from her fights to keep seeing her daughters.

“I lost my passion, I just started fighting to make money so I can bring my daughters over from Guadalajara,” she explained.  “I was alone in Monterrey, not many friends, only training, ‘Charro’ was the only one that would look for me, ask me how I was doing, motivated me.”

Despite her feelings, Millan kept working hard in the gym, disciplined and getting opportunities.  In early 2017 she traveled to the land of the rising sun to take on Japan’s best female fighter of all time, Naoko Fujioka for the vacant WBA flyweight title.

Millan was stopped in the tenth and last round.

“It wasn’t stopped because she beat me, she did drop me once,” Millan said of that fight.  “My face swells up in nearly every fight.  Everybody knows that.  That is why they stopped it.  There are no excuses but I was very sick the week of the fight, a flu with a throat infection.”

Earlier this month Millan returned to her hometown of Culiacan to fight for the WBA interim flyweight title dropping a unanimous decision to Venezuela’s Eva Guzman.  She assures her retirement is not a consequence of her most recent loss.

“Before that fight, I was left alone in my dressing room,” Millan said.  “I felt tired, not physically but mentally. I decided it ended that night.  I did everything to win that fight and retire with a win at home but it didn’t happen.  I don’t feel emotion in the ring anymore, I don’t feel hunger.  When my promotor told me about this world title fight opportunity, I didn’t feel happiness like before, motivation and I don’t want to disrespect the sport.”

“I am always going to be close to the sport but I want to start the next chapter of my life,” she continued.  “I am a lawyer, I want to work in that field.  I don’t want to get any older and make it harder for somebody to give me a job.”

“I will always be close to the sport, I love boxing, it has given me everything,” she stated. “I want to help boxers, make sure they end up with the biggest piece of their purse because I have seen it all in the business side of the sport.”