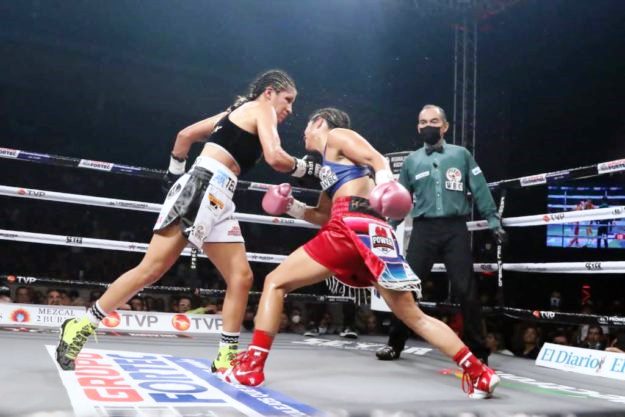 The fight held on Friday was the main event on ESPN Deportes Knockout boxing series in Latin America.  The event presented by Promociones del Pueblo was held in Ciudad Juarez, Mexico.

After the ten entertaining rounds, the ringside judges had it 96-95 and 95-94 for Juarez while one judge scored it 96-94 for Fernandez.

The 34-year-old Juarez, mother of two, captured the title against the rugged Guadalupe “Lupita” Martinez back in December of last year in the middle of the pandemic. In that fight held at the Mexican mega-channel network Televisa Mexico City studios, Martinez looked to make it into a street fight while Juarez pulled out every tool in her bag, from boxing with an educated jab to catching Martinez as she came into closer range.

Although Martinez had her moments in the middle rounds forcing Juarez to battle it out in close quarters, after the 10 rounds Juarez took the title with a unanimous decision.

The Friday clash marked the third opportunity for the 26-year-old Fernandez for a world title.  The first one was in the summer of 2017, Fernandez traveled down to Argentina to challenge the then IBF super flyweight champion Debora Anahi Dionicius.  After ten rounds, Fernandez traveled back to Mexico beltless and with her first pro loss via a unanimous decision.

Two years later in Ciudad Juarez, Fernandez challenged Lourdes older sister, the legendary Mariana “Barbie” Juarez, for the WBC 118-pound title and again she came up short via a close decision 97-93 and 96-94 twice.

Since then, Fernandez dropped back down to her more natural weight of 115 pounds by capturing the vacant WBC Latino title with a unanimous decision over Debani Balderas.  She also scored wins against the former champion Esmeralda “La Joya” Moreno and Mariana Mercado before tonight’s opportunity.

The fight tonight was the second time Juarez and Fernandez mixed it up inside a ring.  In their first go-around in November of 2017, Juarez took a majority decision in Fernandez’s hometown of Ciudad Juarez in the flyweight division.  That fight was for WBC FECOMBOX title.

This time the stakes were higher.

The first round was truly one of study with the mobile Fernandez circling the ring as Juarez stalked her from the center.  As soon as Juarez got into range Fernandez looked to counter scoring with a quick three punch combinations before sliding out of harm’s way.  Juarez closed the first one with a flush hard right near the bell.

By the third the southpaw Juarez had success in closing off the ring on the always moving Fernandez.  As soon as the champion trapped her prey against the ropes, she would attack the body then to the head with fast but somewhat wild punches.  Fernandez began to score from the outside with a long jab followed by a right hand but they were few and far in-between.

After chasing Fernandez for the majority of the fourth, the frustration was evident on Juarez’s face when she decided to let go a barrage of punches. Fernandez, with her back against the ropes, was happy to punch back but the champion’s fists got there harder and faster.

Juarez, the younger sister of Mariana “Barbie” Juarez, decided to follow her advice by staying in the center of ring and forcing Fernandez to come to her.  The hometown favorite did that at times but Juarez, who developed a mouse under her right eye, was able to counter with combinations before Fernandez was able to tie her up.

With Juarez looking to fade a little, Fernandez was able to plant herself a bit more in the seventh scoring with a hard over hand right to the face of Juarez.  Juarez still was the stalker but the prey began to fight back more frequently.

For the first time in the fight Fernandez takes the initiative in the eighth.  Instead of circling and looking for openings in Juarez’s attack, she decided to take on the champion at a closer range.  Pumping out her longer jab and scoring right hands.  Juarez looked to close the real estate between them even more but Fernandez scored with faster hands.

In the 9th round, Juarez proved why she is still the champion.

With Fernandez the most aggressive she has been the whole fight; Juarez used her experience to not only withstand the constant attack from Fernandez but to counterattack between the straight punches from the challenger. When Fernandez tried to get physical with yet another hold, Juarez tackled her down to the canvas where Fernandez needed some extra seconds to recuperate as “Barbie” Juarez threw some choice words her way.

Some confusion was seen at the final bell when Juarez recognized the end of the fight and her pending win, Fernandez apparently didn’t hear it and kept punching as Juarez just kept her hands raised like a true warrior.