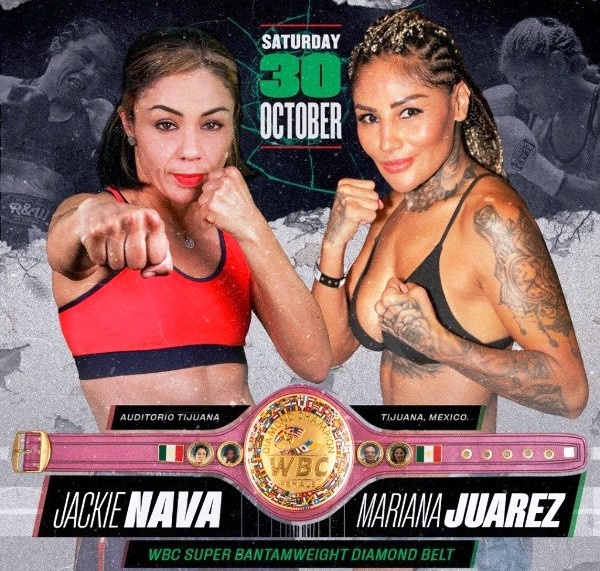 They say good things come to those who wait but sometimes the wait is too long.

The fight is presented by Zanfer Promotions in association with Promociones del Pueblo and televised live in Mexico by the Azteca channel and in Latin America by Space.

This is not the first time this fight has been offered.

The first time was attempted in 2018 and the proceedings got so far where both women fought on the same card in August of that year with Juarez defeating Terumi Nuki and Nava stopping Alys Sanchez in seven in Mexico City.  They held a press conference the following month to announce the fight later that year. But it never materialized and both cited promotional issues.

“I am very happy to be back in Tijuana,” the 41-year-old Juarez stated at the final press conference earlier this week.  “Many people that know my story know that I lived and trained here for around three years.  I feel like this city is my second or third home and I have a special love for the city.”

Juarez went pro in her native Mexico City in 1998 and after a stint in Los Angeles, California, in the early 2000s, she found herself at the Zona Norte Gym near the international border between Tijuana and San Diego around 2009.  There she trained along Erik “Terrible” Morales under the watchful eye of Jose “Olivaritos” Morales (RIP), father and trainer of Erik.  By that time Juarez had captured her first major title, the interim WBC flyweight strap, with a unanimous decision over Irma Sanchez.

In early 2017 she moved up to bantamweight to capture the green and gold 118-pound title defeating Catherine Phiri in the main square of Mexico City with almost half a million of fans in attendance.  She defended that crown nine times before dropping a unanimous decision to Yulihan Luna earlier this year.

Never to run from a challenge, she will face Nava next.

“This is another challenge,” she said of her fight against Nava.  “She is also a great Mexican fighter as well.  She is a great champion, who doesn’t admire the career of Jackie Nava?  We prepared ourselves at 100-percent for this fight.  I am very happy to have this challenge and I am going to enjoy myself and Saturday night.  We are two warriors inside that ring and the fans are going to enjoy it.”

Tijuana’s own Nava, also 41, threw her first punch for pay in the summer of 2001 after a short but successful career as a kickboxer.  She became the first female world champion crowned by the WBC four years later with a unanimous decision over Leona Brown in the super bantamweight division. She had captured the WBA 118-pound title one fight before stopping Martha Arevalo in the fifth.

After those legendary wars with Ana Maria Torres in 2011, where they waged battles in a draw and a loss for Nava in two fights, that put her on the national map, Nava became a sensation in her native Mexico and the next year she captured the WBA super bantamweight title with a unanimous win over Chanttall Martinez.  She unified the title with the WBC two years later with a majority decision over Alicia Ashley.

Soon she took a hiatus to give birth to two daughters and her career slowed down recently to attend to her political career.  In the last five years, Nava has only fought seven times, winning all except a hard-fought draw against Argentina’s Marcela “Tigresa” Acuña in 2019.

“Mariana is known as a fighter that has always given her all inside the ring,” she continued.  “We’ve seen her work.  I think I have always faced the best in my career and she is no exception.  This fight is very important for me.  I want to give a win for my city of Tijuana but above that, we want to give a great fight for everybody.”