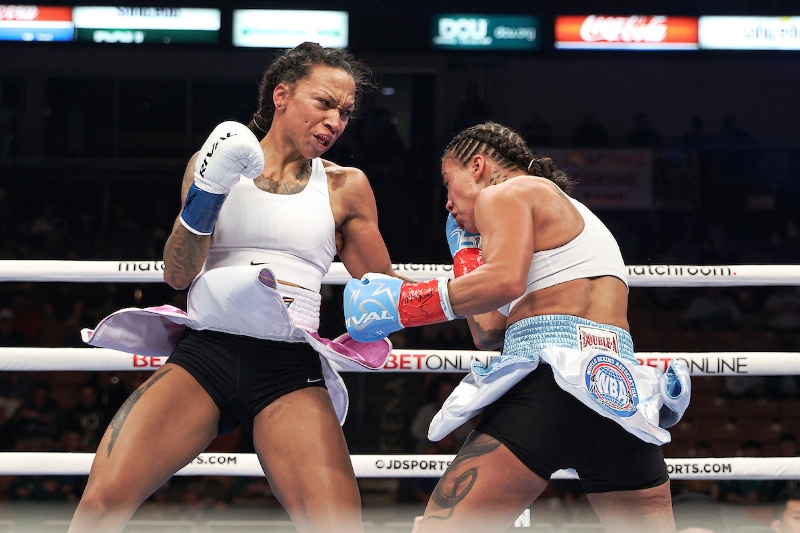 In a frenetic back-and-forth battle Kali Reis remained the WBA super lightweight champion by a razor close split decision over Canada’s Jessica Camara on Friday and moves on to face a two-title holder in the final of the super lightweight tournament.

It was not easy.

Reis (19-7-1) overcame a sluggish start to rack up rounds in the second half of the fight against free-swinging Camara (8-3) at the SMHU Arena in Manchester, New Hampshire. She also picked up the WBO and IBO titles with the victory.

Though Reis walked in with world titles as a super lightweight and had formerly held a middleweight title, she immediately ran into a fast-starting Camara who was not fazed by the champion, nor a first round attempt to confuse by fighting in a southpaw stance.

Reis immediately dropped the ploy and returned her stance to orthodox.

Perhaps Camara saw Reis previous fight against Diana Prazak this past August in San Diego, where the much smaller fighter was able to find success with an all-out attack. The Canadian fighter seemed to follow the same script and never allowed the fight to become a pure boxing match.

Camara forced the champion to stand and punch at a rapid pace.

But just like her previous fight, Reis slipped into another gear and though her attacks were not as physically obvious, she used subtle but effective short punches to the body and head. She was especially successful at counters.

Still, Camara was persistent with her attacks. Though it seemed she had built a large lead in the first half of the fight, it was not to be so.

Reis helped her own cause by ramping up her attack in the second half of the fight. She realized that anything can happen when it comes to judges. Her attacks seemed more intent on winning by knockout rather than on a score sheet.

In the ninth round Camara opened the scoring with a left uppercut and Reis countered with a left hook. Camara scored with a three-punch combination and was countered by another powerful Reis left hook. It was tit for tat and difficult to assess whose blows were more effective.

The final round saw Reis exchange with Camara and immediately a large cut over the left eye of the Canadian caused the referee to stop the fight. It changed the momentum when the fight resumed. Camara seemed confused and Reis took charge with a powerful right cross that stunned her foe. It looked like Camara might not survive the final seconds, but she did. It was an epic ending to a fight that proved worthy of a title fight.

After 10 rounds one judge scored it 95-94 for Camara and two others saw it 97-93 for Reis who wins by split decision.

“Hats off to Jessica Camara,” said Reis. “We had to pull everything out of the tool box.”

Camara was respectful to the winner.

“I’m honored to share the ring with her,” Camara said.

Next, will be Chantelle Cameron who defeated Mary McGee a few weeks ago by decision. The final entrants of the super lightweight tournament are now set. No date has been established but it will be England versus the USA.