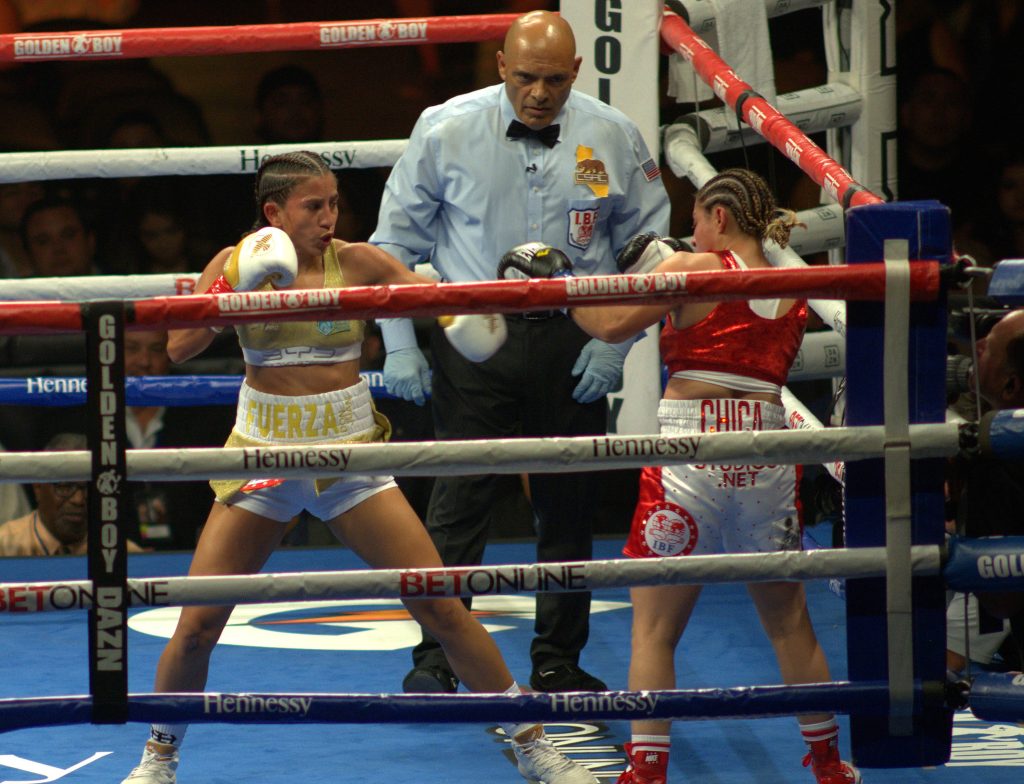 ANAHEIM, Ca.-Costa Rica’s Yokasta Valle sped past Lorraine Villalobos to win by unanimous decision and unravel her abilities in front of American fans in Anaheim and retain the IBF minimumweight world title on Saturday.

Speed was a major factor.

Valle (25-2, 9 Kos) used her blinding speed and incredible stamina to overwhelm gritty Villalobos (5-4, 2 Kos) who had shown in an earlier world title clash she packs power. But that power was neutralized in front of more than 7,000 fans at the Honda Center in Anaheim.

From the opening punch it was apparent that Valle’s speed was world class and that if desired, she could make it a very boring fight. Instead, she stayed in the pocket with the very dangerous Villalobos who has good power.

“I like these kind of fighters,” said Valle. “I knew very little about her. I knew that she likes to come forward and throw the overhand right a lot.”

Villalobos used a jab to work inside and Valle traded jabs while moving in. The difference was the Costa Rican fighter’s speed and accuracy gave her an edge. When both got too close Valle clinched and they started over again at a distance for the first three rounds.

“She is shorter than me, so I was fighting her at a distance,” Valle explained. “I had to be careful.”

Though the Costa Rican figther had a height advantage, she looked intent on using her speed and endurance to attack. The four and five-punch combinations were fast and Villalobos had problems adjusting for the first two rounds. Left hook counters were shooting too high and rights were too. Meanwhile, Valle was deadly accurate.

In between rounds Villalobos’ trainer must have told her to lower her aim because in the third round Villalobos connected with three left hooks. Valle absorbed them well and adjusted. Then Villalobos fired a right and that landed. It looked like the Orange County fighter had found the solution. Valle moved out of range and reloaded and fired off quick combinations in flurries. It was the closest round so far but the Costa Rican fighter’s volume of blows could not be overlooked.

Valle opened the fourth round with a thudding right that backed Villalobos. She then followed it up with a sizzling combination and had Villalobos looking for an escape. The champion Valle followed Villalobos who for the first time was not engaging. It was apparent Valle was in control.

If anyone was waiting for Valle to tire it was not going to happen.

Despite the overwhelming number of blows unleashed the IBF champion was not tiring and the speed of her blows was still apparent. Villalobos was under siege and looking for a way to get back in the fight. If she was waiting for Valle to become arm weary it just was not happening.

Valle completely took over the fifth round and battered Villalobos around the ring. Despite the number of blinding blows launched by the Costa Rican, the California fighter was not surrendering but desperately sought an answer for three rounds.

Villalobos finally made her stand in the eighth round as she began timing the world champion’s attacks. Some perfectly timed left hook counters and overhand rights blasted Valle, but she immediately returned with a flurry of blows. Though the round was the closest since the third round, Valle still seemed in control.

It was Valle’s first fight in the US, she had come close to fighting in Los Angeles several years ago, but her trainer at the time could not obtain a visa. For this fight she trained with American trainer Gloria Mosquera.

“I wanted to give the fans a great fight,” said Valle. “I was trying for the knockout, but she was a tough Mexican fighter.”

After 10 rounds all three judges scored it 100-90 for Valle who retains the IBF world title.

Valle was asked repeatedly about a possible match with Seniesa Estrada who has world titles in the minimumweight and light flyweight divisions. The Costa Rican fighter said she intends to fight all the top fighters.

“I’m not focusing on any one fighter. I want all the titles in the division,” she said.

It was a solid debut for the Central American fighter who was just signed by Golden Boy Promotions to a four-fight deal and is co-promoted by MarvNation.