No Dispute: Jessica McCaskill Stops Ibarra in Three
Written by: David A. Avila 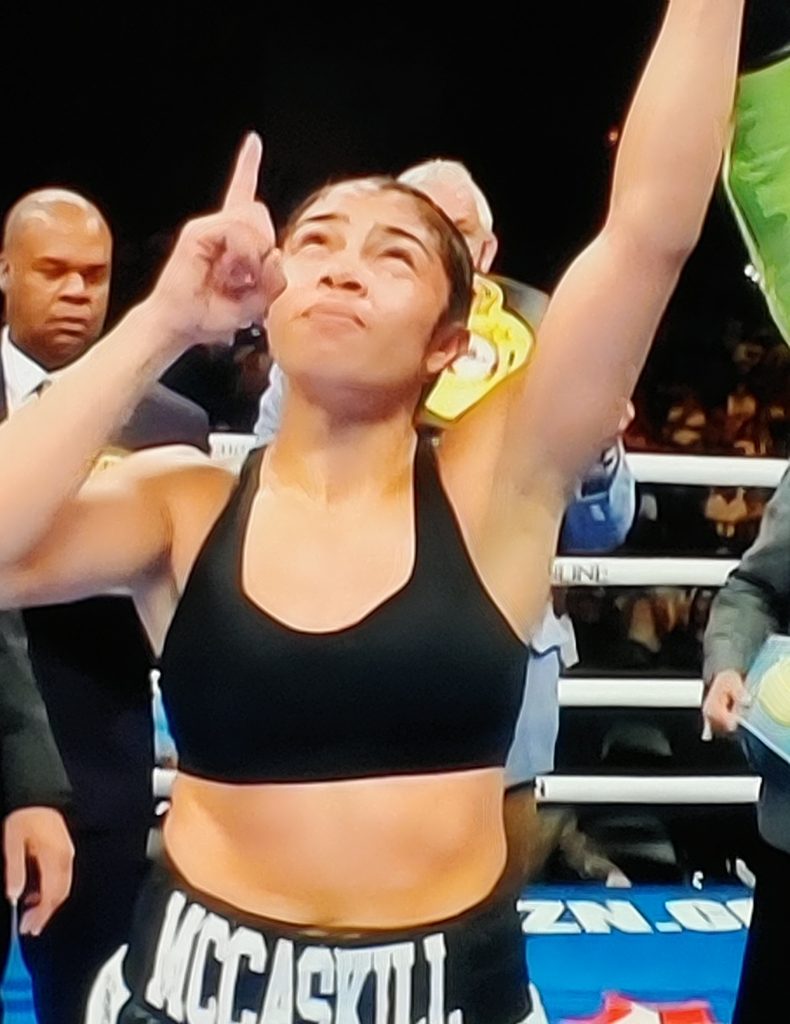 Undisputed welterweight champion Jessica McCaskill blasted past Mexico’s Alma Ibarra like a rhino through tissue paper in winning by stoppage to retain the championship on Saturday in San Antonio, Texas.

Though much shorter in height, Chicago’s McCaskill (12-2, 5 Kos) brutalized the taller Ibarra (10-2, 5 Kos) with a bob and weave style reminiscent of Henry Armstrong in the 1930s. She retains the WBO, WBA, WBC, IBF and IBO welterweight titles.

“I thought it was going to be a crazy firefight. Mexican vs Mexican,” said McCaskill who is half Mexican and half Black. “I just knew my training was spectacular. I just had too much power, too many angles.”

Ibarra was expected to be the toughest test for McCaskill especially with her experience against other Mexicans in both amateurs and pros. But few can match the Chicago fighter’s relentless ferocity and stamina. It’s what enabled her to dominate former champion Cecilia Braekhus when they met twice.

From the opening bell, McCaskill drilled Ibarra with an overhand right and the taller Mexican fighter seemed lost in a daze as the shorter fighter bored in with blows. Ibarra held on tight.

McCaskill used her size disadvantage as a defensive weapon as she bobbed and weaved under Ibarra’s blows and kept her head out of the center. A few Ibarra uppercuts landed but not enough to deter McCaskill whose quicker hands found the mark.

For three rounds McCaskill dealt most of the punishment and left Ibarra unable to defend except by holding. When Ibarra grabbed hold of McCaskill’s neck, the Chicago fighter took her down to the ground and rolled over her.

That roll seemed to take the fight out of Ibarra.

McCaskill continued to attack and Ibarra seemed lost as the bell rang to end the round. In Ibarra’s corner she demanded that the fight be stopped, claiming McCaskill was holding her. Maybe she was concussed because she got the facts wrong. Regardless, the fight was stopped.

When McCaskill was told that Ibarra claimed she was holding, a puzzled look crossed the champion’s face.

“I don’t like to hold, I like to throw. I keep my hands in and try to roll with the punches.”

Though undisputed and holding all the welterweight titles, the Chicago fighter and her team are looking to drop back down to 140 pounds where she formerly held a title. She spoke of meeting Britain’s Chantelle Cameron in a super lightweight clash.

Now it’s up to their promoter Eddie Hearn to make the fight for Matchroom Boxing.