Yokasta Valle vs Evelin Bermudez in L.A.
Written by: David A. Avila 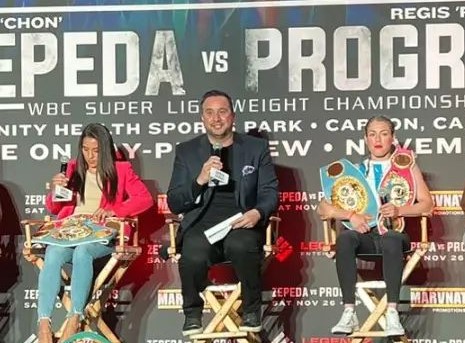 A pivotal battle between Costa Rica’s Yokasta Valle and Argentina’s Evelin Bermudez looms this weekend at a venue with a reputation for gladiator-like performances every time it opens its doors for prizefighting.

Valle (26-2, 9 Kos) challenges hard-charging Bermudez (17-0-1, 6 Kos) for the WBO and IBF light flyweight world titles at Dignity Health Sports Park in Carson, Calif. It was formerly called the StubHub Center and Home Depot Center and is actually a tennis stadium.

The MarvNation Promotions fight card that also features Regis Prograis versus Jose “Chon” Zepeda will be streamed on FITE.TV pay-per-view.

Ever since Valle signed a co-promotional deal with Golden Boy Promotions, she moved her fight camp into the Los Angeles area of Southern California. If you are not privy to the area’s reputation, there are more than 100 boxing gyms scattered throughout. It’s not an exaggeration.

Though American television and local newspapers refuse to cover professional or amateur boxing on a regular basis, the local residents frequent the many boxing shows that occur almost every week. California has the most boxing shows every year in the US.

Valle chose local L.A. female trainer Gloria Mosquera to become her new coach at the beginning of 2022. Since working with a new trainer Valle has adapted more of a professional style with less slap and run and more stand and hit. She has also limited her amount of holding and clinching.

One thing Valle does possess is an abundance of athleticism. The popular Costa Rican can unravel a four-punch combination faster than you can say Lickety-split. Agility-wise her leg speed and stamina are off-the-charts. Seldom does she tire and seems to have a love of running.

Though athletic, punching power does not seem to be her strength. And Valle does not possess a strong left hook. That’s a punch that most women seem to lack in their arsenals.

Bermudez does not have a left hook at all. But she does have a punishing left jab and an overpowering hammer of a right cross.

Undefeated through 18 pro fights in the rugged Argentine boxing world, Bermudez hails from a boxing family including big sister Daniela Bermudez and younger sister Roxana Bermudez. Her father trains all of the sisters. They all have fighting spirits.

Evelin Bermudez fought once outside of her native Argentina and that resulted in a draw when she met Mexico’s Silvia Torres in Mexico City three years ago. She retained the IBF world title and floored Torres twice.

Do not be fooled by her looks, Bermudez is an assassin.

This past March the Argentine fighter added the vacant WBO title when it was taken away from Seniesa Estrada who had captured it by rugged decision over Japan’s Tsunami Tenkai last year in Los Angeles. It seems unfair that Japan’s Tsunami did not get an opportunity to recapture it. So far Tenkai gave Estrada her toughest fight yet.

Bermudez will be defending both titles against Valle. Expect the rounds to fly by very quickly once the Argentine fighter gets the range. She does not slow down and has no reluctance to fire three or four consecutive right-hand bombs.

Valle has more experience fighting internationally. Already she has fought in Germany, Spain, Japan and in the USA. That experience can help when it comes to adapting and winning rounds.

The light flyweight division has long been one of the last loaded divisions in women’s boxing. This pits two dynamic fighters that will clear out part of the field when 10 rounds are completed, or the fight is called.

Too bad it’s only two-minute rounds.

Jamileth Vallejos (2-9-2) knocked out Carly Mackenzie (0-4) in the first round on Sunday Nov. 13. The featherweight bout took place at Durres.

Maria Maderna (18-13-3) won by unanimous decision after six rounds against Nerina Salafia (0-6-3) on Friday Nov. 18. The super welterweight bout was held at Haedo.

Maria Ferreyra (5-0) won by decision after six rounds against Gisela Avalos (2-8-1) on Friday Nov. 18. The lightweight bout was held at Villa Maria.

Kaitlyn Lodge (1-1) knocked out Maureen Chand (2-2) in the third round on Friday Nov. 18. The welterweight match was held at South Windsor.

Sara Bellotti (5-0) knocked out Diana Kulinova (4-5) in the second round on Saturday Nov. 19. The lightweight match was held at Maria Enzersdorf.

Ingrid Caicedo (5-0) defeated Darianis Garcia (3-2) by unanimous decision after 10 rounds on Saturday Nov. 19. The flyweight bout was held at Pasto.

Rebah Matanda (3-0) won by decision after four rounds against Jenni Ettanen (0-1) on Saturday Nov. 19. Also, Hanna Rousu (1-0) knocked out Nana Chakhvashili (7-20) in the second round of a super middleweight fight.

Amina Zidani (3-0) knocked out Borena Tsertsvadze (1-1) in the second round on Saturday Nov. 19. The super featherweight bout was held at Le Cannet.

Enerolisa De Leon (7-6-2) knocked out Elina Tissen (25-3) in the ninth round on Saturday Nov. 19. The featherweight title match was held at Warendorf.