Ebanie Bridges vs Shannon O’Connell and More
Written by: David A. Avila 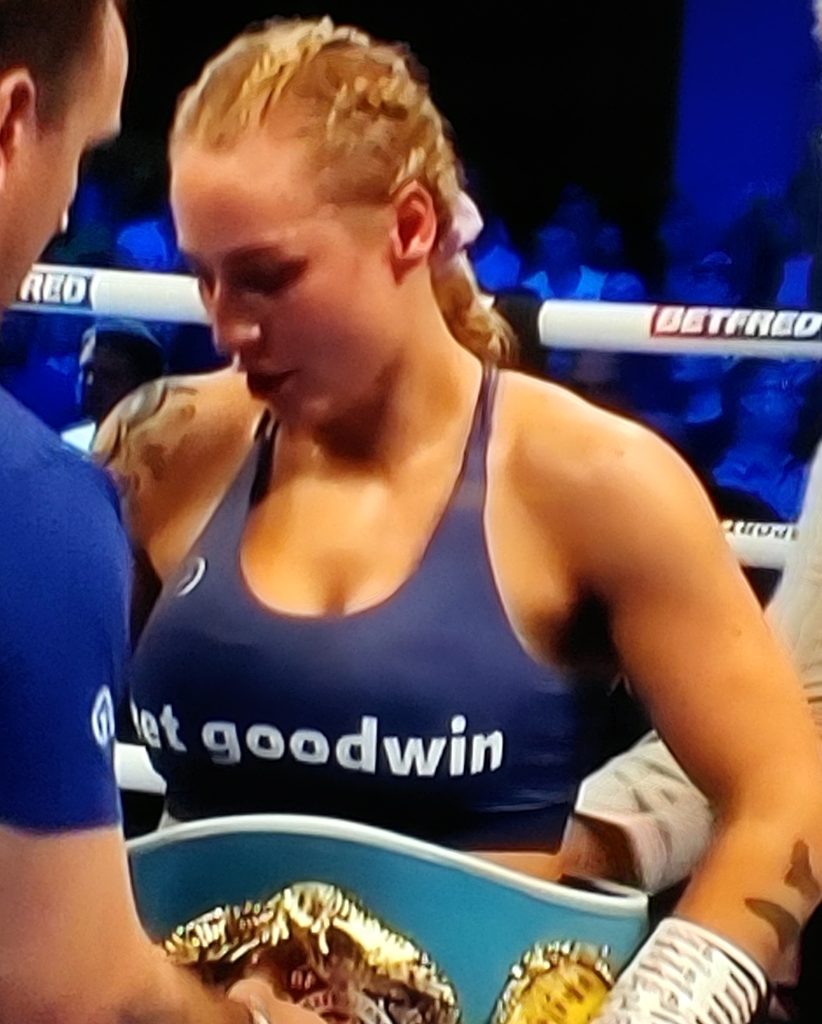 One represents the new wave of women’s prizefighting that has begun to envelope the boxing industry. The other comes from the generation that held on despite claims that women’s boxing would never sell.

Unknown in the prize ring but very well known on social media, Bridges was matched with then bantamweight contender Shannon Courtenay, a rugged British fighter whose prior knockout win over Dorota Norek was a contender for KO of the Year. More than a few fans expected Bridges to become a knockout statistic in their battle for the vacant world title.

That night in April 2021, Bridges and Courtenay exploded against each other with many fans and experts surprised at the ferocity and unexpected skill. The blonde Australian fighter was seen as a pretty, buxom fighter with looks and nothing else. That night she performed at a level not seen from fighters with almost no amateur experience and only a handful of pro bouts.

It was a revelation.

Though the taller Courtenay would prevail and win the WBA bantamweight title by decision after 10 hard fought rounds, it was clearly evident Bridges was not just a looker, but a fighter as well. Her stock soared.

Promoters are always looking for fighters that can sell tickets and capture the attention of fans. Plus, she could fight and with an entertaining style.

“My style is a come-forward aggressive Mexican style,” says Bridges who spent time in Mexico City working with the championship sisters Mariana “Barby” Juarez and Lourdes “Little Lulu” Juarez. “But I’m looking forward to showing what else I have in the tool box for this fight.”

When Bridges challenged Argentina’s Maria Roman for the IBF bantamweight title, once again fans were unsure what to expect from the Aussie fighter last March in Leeds. Immediately the fighter from New South Wales took over the fight with precision, skill and strategy against the veteran with 22 pro fights. Bridges grabbed the IBF title by unanimous decision.

This will be her fourth attempt at a world title but first challenge in the bantamweight division. Until December 2020, O’Connell had not fought as a bantamweight since 2017. Her last four fights took place in the bantamweight class as she defeated four rising Australian stars including Taylah Robertson and Cherneka “Sugar Neekz” Johnson.

Now O’Connell meets Bridges and many expect an Aussie war in England.

“She is experienced. Likes to get a bit dirty; tends to come forward and be aggressive. But also waits for counters,” said Bridges about O’Connell.

Few know but O’Connell was close to being signed by Top Rank in 2017. The American promotion company was contemplating signing both Mikaela Mayer and O’Connell. But the Aussie fighter absorbed a big knockout loss to Helen Joseph and that nixed the deal. They only signed Mayer.

O’Connell’s wins over fellow Aussies has catapulted her back into relevancy. But can she handle the world title test. Their battle on social media helped make this fight happen but now the real test emerges on Saturday in Leeds.

Bridges as always, loves to perform.

“It’s been a very exciting roller coaster that doesn’t slow down,” said Bridges.

Japan’s former light flyweight world champion Tsunami Tenkai finally returns to the prize ring. It’s been 17 months since her last fight when she was defeated by the great Seniesa “Super Bad” Estrada in a blistering back and forth battle.

When Tenkai fought Estrada in Los Angeles back in July 2021, it was the first time that Estrada has lost more than one round in years. It was also the first time I had ever seen anyone land a four-punch combination on the elusive Estrada. Judges were not kind to Tenkai in that world title loss. Still, she is one of the best kept secrets in women’s boxing and has won world titles in the super flyweight and light flyweight division. She fought Naoko Fujioka to a draw in a flyweight world title clash in 2019.

Southern California’s Maricela Cornejo travels to South Africa where she will fight Mapule Ngubane in Durban, South Africa on Sunday Dec. 11 for a regional middleweight title.

“I’m excited to get back in the ring,” said Cornejo. “I’ve been in an intense training camp with Jose Benavidez Sr. I feel strong and ready for this title fight.”

WBC minimumweight titlist Tina Rupprecht (11-0-1) defends against Peru’s Rocio Gaspar (12-1) on Saturday Dec. 10, at Heilbronn, Germany. This will be the fourth defense since winning it on December 2018.

Rupprecht’s been offered unification matches multiple times from both Seniesa Estrada and Yokasta Valle who hold the other minimumweight titles. So far, the fighter known as “Tiny Tina” has not accepted any fights outside of Europe.

Michaela Kostaskova (2-0-2) and Mahjouba Oubtil (4-2-1) fought to a draw after 10 rounds on Saturday Dec. 3. The welterweight fight took place in Vienna.

Mayumi Nakano (2-1) knocked out Kagishippo Sachi (2-1) in the third round on Monday Nov. 28. The atomweight fight was held in Tokyo.

Elif Nur Turhan (3-0) knocked out Nikolett Szabo (0-5) in the first round on Monday Nov. 28. The super featherweight match took place at Tetovo.

Beatriz Ferreira (2-0) knocked out Carisse Brown (7-3) in the second round on Saturday Dec. 3. The super featherweight fight was held at Glendale, Arizona.