Yesica Bopp Annihilates Rengifo in Argentina; Who’s Next?
Written by: David A. Avila 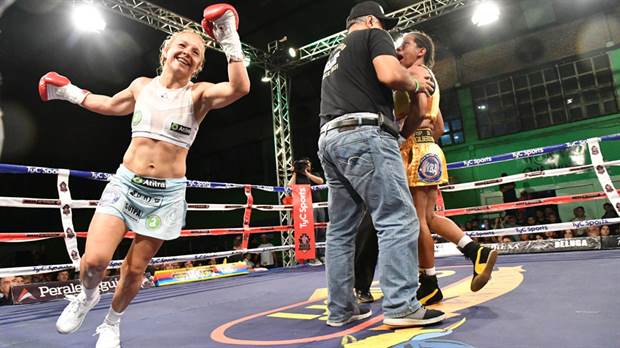 In a fight in which she was able to comfortably display her impeccable technique in the ring, Argentina’s Yesica “Tuti” Bopp (33-1-0, 13 KO) won by stoppage in the seventh round against Venezuela’s  Debora “Pantera” Rengifo (9-4-1, 5 KO) and retained for the 19th time her WBA minimumweight title in a fight that took place at the Polideportivo José María Gatica in Avellaneda, Bopp’s hometown just south of the city of Buenos Aires.

The visiting fighter tasted the canvas in three separate occasions during the bout, being knocked down in the first, fourth and sixth rounds. Midway through the seventh, Rengifo’s chief second jumped into the ring to stop the carnage while Bopp, surrounded by her most loyal fans, jumped on the top rope to soak up the celebratory explosion of a packed house.

It was another impeccable performance of one of boxing’s longest-reigning champs in any division or gender, going on nine years already if we count her two-fight interim champion stretch, a fight in which the first-ever Argentine boxer to engage in an official amateur fight exhibited an extraordinary drive and an aggressiveness that was palpable from bell to bell.

The visitor showed grit and bravery in generous amounts, but her boxing skills, which may have been competitive in any other circumstance and any other opponent, were clearly insufficient when measured against the power, the distances and the tempo that Bopp displayed throughout the bout.

The first two knockdowns were clear and indisputable, and even though the third one was a bit more confusing, the lack of valid arguments by the visitor was already worrisome, and she was accumulating a lot of punishment. Referee Hernan Guajardo was already keeping an eye on the condition of Rengifo and seemed poised to end the fight prematurely when the challenger’s trainer jumped into the ring to halt the beating as Rengifo complained, to no avail.

It is becoming urgent for Bopp to receive challenges worthy of her talent, and to have them framed and displayed in a more prominent manner. The card in which she achieved her 19th win in world title bouts had almost no repercussion or publicity, and with the abundance of opponents in her weight class (one of the most prolific in female boxing) it shouldn’t be hard for her to find opponents who could test her will and make her extraordinary talent shine.

The winner of the WBC title bout between Kenia Enríquez and Jessica Nery Plata on Satuday, Nov. 18 should give Bopp a serious challenger and a title that she could unify with hers and thus increase her visibility and her chances to cash in on her long career. Until that day, the Rengifos of the world will parade in front of her over and over, and we may never really know how far Bopp would have been able to go if the level of her opposition had been at the same level of her indisputable talent.