Another Look at Claressa Shields Performance
Written by: David A. Avila 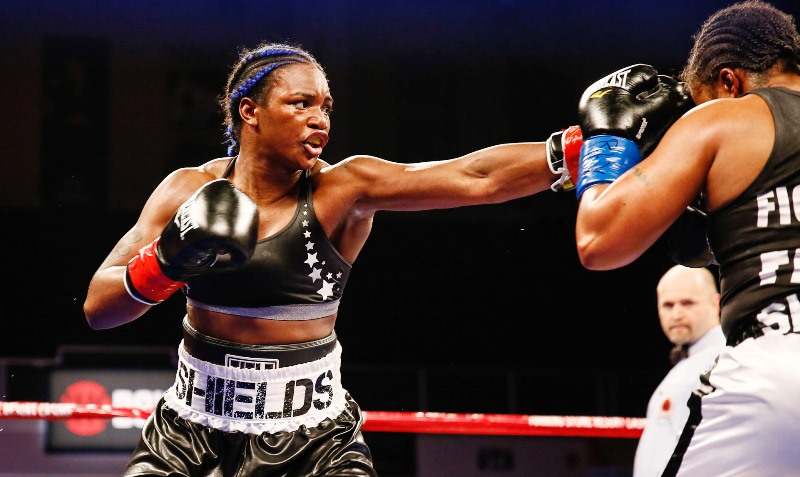 Another Look at Claressa Shields Domination

Fans and viewers across the nation expected to see a more evenly matched world title fight, but instead, one fighter Shields (5-0, 2 Kos) had weapons from 2018 and the other Nelson (17-1-3, 2 Kos) bore weaponry from the 1990s at the Turning Stone Resort and Casino in Verona, New York.

It was not nearly enough.

Both had long range missiles and claimed to have the firepower to demolish the other from a distance. Instead, while Shields fired away from all angles and landed any time she desired, the other fighter Nelson fell short with blatant impotency.

From the opening bell speed was the overwhelming factor as Shields unleashed her blazing combinations and Nelson tried to keep up. It was obvious that the two-time Olympic gold medalist was setting down on her punches. Instead of the wild blinding combinations, there was pinpoint design this time.

Nelson tried to match Shields early on but though the heart was willing, the velocity was unattainable for the 41-year old from Ashburn, Virginia. It was like watching a Volkswagen Bug race a Porsche Targa.

One visible result, especially in the first few rounds, was that Shields seemed more compact with her punches. There was more deadly concentration in making each blow count and with more force. But Nelson’s ability to absorb a punch was evident. She could take a punch.

In the fifth round 22-year-old Shields delivered several pinpoint lead rights that should have decked Nelson, but she remained upright, though she teetered a bit. Right after right after right connected soundly for Shields. It could have been a 10-8 round.

The best way for Nelson to win was to deliver a knockout blow against Shields. And though she seldom connected a few blows did land for the Virginian. The seventh round was Nelson’s best round as she pinned Shields against the ropes and fired away at the body. Shields seemed more concerned with avoiding head butts than blows, but it was Nelson’s best round of the fight.

The action slowed from the eighth round on but Shields worked on her check left hook and attack to the body. Nelson connected a few times of her own, especially with the left hook, but it hardly inspired a blink of the eye from Shields.

Shields was dominant with her speed and accuracy as Nelson seemed intent to ride the storm. Though the older fighter never quit, she was never able to compete on equal ground. Maybe 15 years ago she had the tools and weapons, but not in 2018.

It was 21st century warfare and Nelson was from an era in the past.

“I landed every shot that I thought possible to land,” Shields said. “She was tough, she wasn’t a pushover.  She put on a good fight.”

Nelson was gracious in defeat. When the cards were read and all three judges had it 100-90 for Shields, the loser applauded.

“I’m not happy because I didn’t win, but other than that I thought I executed pretty well,” said Nelson after her first loss as a pro.  “I gave her a better fight than she was expecting.”

Sitting in the crowd was WBO and WBC middleweight titlist Christina Hammer. She was unable to obtain a work visa in time thus was unable to perform as scheduled. Hammer is slated to meet Shields in a fight sometime in the late spring in the U.S. Shields took notice.

“People think Hammer is more skilled than me so I can’t wait to show her that she’s not,” said Shields.

Franchon Crews (3-1) out fought Tiffany Woodard (4-10-3) over six rounds to win by unanimous decision in a super middleweight contest. Crews was recently signed by Salita Promotions that also promote Shields and two other Russian female fighters.