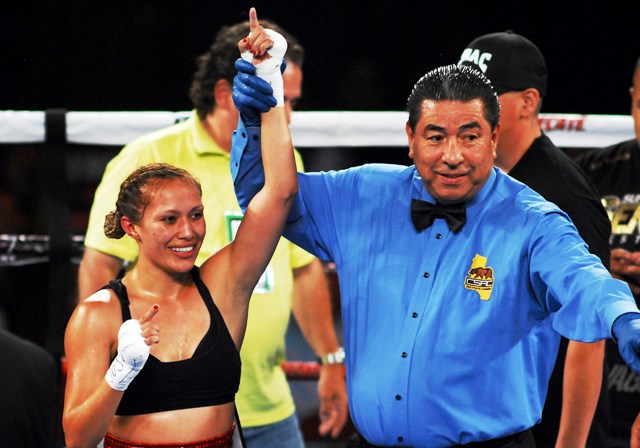 When it comes to a niche sport like female boxing, news travels quickly.  Since the community is relatively small compared to its male counterpart especially in the United States, when something major happens, the news of it spreads like wildfire.  That is exactly what happened when highly-touted undefeated junior flyweight Seniesa “Super Bad” Estrada (11-0, 2KO) became the third woman to sign under the Golden Boy Promotions banner.

The 25- year-old Estrada of East Los Angeles, CA, got the news during an appearance on Golden Boy’s sponsored podcast broadcast out of downtown Los Angeles.

“I wasn’t ready for it; I wasn’t really expecting it to happen like that.  All became so real having Robert (Diaz, Golden Boy Promotions matchmaker) handing me the contract and telling me they are ready to go.  It was definitely a big day for me, I feel like now it is the actual start of my pro career.  I feel this where I need to work even harder and I am even more motivated that I have ever been.”

Four out of her 11 fights have been on a different promoter’s cards including K2 Promotions led by Tom Loeffler, and so before the news broke of her signing with Golden Boy, Estrada made sure she made a phone call.

“I was going to fight on the Superfly II card and right before we were going to get that going I found I was officially going to be signed by Golden Boy,” Estrada explained to the all-female boxing podcast the 2-Minute Round.  “I called Tom Loeffler myself and I told him it looked like we were going to be signing with Golden Boy Promotions.  He congratulated me and I thanked him for everything.  Tom is awesome, he is a great guy.”

Not by the book

Despite Estrada stating as if this new chapter in her career is the beginning and everything before the prologue, her life in the pro ranks actually began in 2011 after a very extensive and successful amateur career.  Estrada began boxing before the age of ten under the tutelage of her father, Joe Estrada, and now trains with Dean Campos, who is mostly known for his work with former world champion Sergio “Latin Snake” Mora.

“It started from a very young age,” Estrada said of her unorthodox athletic style which is one of the first things you notice about her once she gets in a ring.  “I would do a lot of unorthodox things when I was little; a lot of things that are not by the book.  I think I was very creative, I would watch a lot Roberto Duran, ‘Sugar’ Ray Leonard and Roy Jones Jr growing up and I studied their fights.  I wanted to be just like them.  I think I picked up a lot of different things from different fighters.  Through the years with my dad coaching me and the trainer I have now, Dean Campos, I think he adds more structure to the things I do so it helps a lot.”

With almost seven years as a pro fighter, Estrada has very few fights, a fact she attributes to a lack of promoter and also her weight class, 108 pounds, but she feels now with the help of one of the biggest promotional companies in the sport, that will soon change.

“I have only fought at 108 pounds I think like three times out of my 11 fights.  It has been 110, 112 and as high as 113, which is way out of the weight class I should be fighting, I should be at 108 pounds in every single fight but it is difficult not having a promoter.  My team and I can’t afford to get the girls at the weight class that we want so I have to take whatever they give me.  Fighting heavier girls is what I have been doing but fortunately, now being with a promoter, I can get the opponents and weight that I want so that would be better for me.”

“I will be fighting four or five times a year,” she said of her schedule for 2018.  “Definitely four and if I can do a fifth I would be able to do a fifth.  I am excited because it is the opposite now, I should have been busy and active when I turned pro all the way up to my 11th fight but it wasn’t like that because it is not easy not having a promoter.  Now I will be active so I am excited about that because I would fight every month if I could.”

One of the reasons Estrada and her team decided to sign with Golden Boy was the fact the company has a televised outlet with the biggest sports channel in the world, ESPN.

“I am very excited about that,” Estrada said regarding the network.  “I can’t say the date of my next fight yet, I don’t think I can say that but it will be soon and I will be able to announce soon.  What makes me excited is ESPN dates because I like other women, we all deserve the exposure to fight on TV just like men do.  I have gained a big fan base in my city not being televised and not having a promoter, so just imagine what I would be able to do with a big promoter and fighting on TV.”

The first woman Golden Boy Promotions signed to their outfit was 2012 Olympic bronze medalist Marlen Esparza of Houston, Texas.  The news of Estrada signing under the same banner only sparked the female boxing world to entertain matchup between the two, something the Estrada knows will happen.

“I know she says she wants to fight me and she wants to fight me right now so her wish is going to come true,” Estrada said confidently.  “I am ready any time.  I don’t know where it came from.  Maybe somebody that doesn’t like me went and told her some things that weren’t true.  Everybody in boxing talks and spreads rumors so I don’t know.  I just think she sees the competition and she doesn’t like it.  If I wasn’t a threat, she wouldn’t care to say anything bad about me but as soon as my name is mentioned, she has a problem with it.  I’m not too worried about it.”

As far as the immediate future, Estrada doesn’t have any names in mind but is willing to fight anybody Golden Boy Promotions puts in front of her.

“Off the top of my head I can’t pick like three I would like to fight but I would like to fight the best for sure and I want to fight whoever has titles out there.  This year I just want to impress and look good, put on great fights especially being on ESPN.  I just want to gain more fans and have people be excited and entertained when they watch me fight.  Of course I’m always up to fight the best and the champions in my weight class and that is something I am definitely looking forward to.”