Great Female Fights from the Past: Layla McCarter vs. Chevelle Hallback II
Written by: David A. Avila 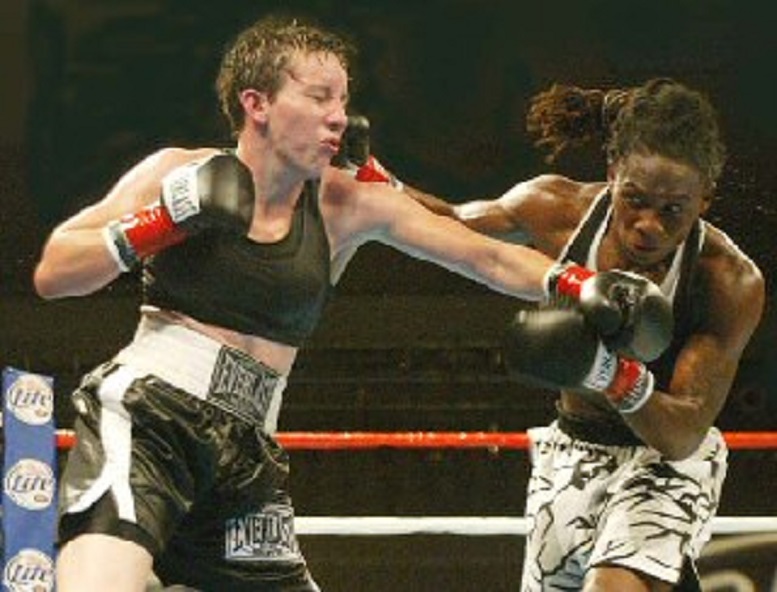 When it was announced that Chevelle Hallback was put on a fight card and that Layla McCarter was the foe it raised a few eyebrows in the female fight crowd. A little later a bigger announcement followed: ESPN was going to televise the female title fight.

That was in 2004 and the female fight world was ecstatic.

During that year Hallback was one of the top female fighters pound for pound and McCarter was beginning to crack into the elite level when they met at Pala Casino in Southern California. On July2, 2004 the two female prizefighters collided and gave one of the best performances in female fight history.

“I remember when they called me she was fighting on Sugar Ray Leonard’s shows,” said McCarter by telephone. “I was the opponent and was supposed to lose.”

Hallback had agreed to be co-managed by Jackie Kallen and Jeanne Miranda earlier in the year and was anxious to return to the boxing ring. Not many female fighters were anxious to fight her, except for McCarter. They had fought on December 2002 in Georgia with Hallback winning by decision.

In 2004, Hallback had moved to Temecula, California to test the waters and the money on the West Coast. A native Floridian, the likeable Hallback was willing to fight anyone at any weight. Ironically, so was McCarter.

Both signed the contract and the fight was set.

McCarter had a record of 12 wins, eight losses and four draws when they first collided. Nineteen months later her record was 17 wins, 10 losses and four draws. But the addition of trainer Luis Tapia began an upward climb for the female fighter and her skillset began to rapidly improve.

Hallback, who could not be reached for this story, was a super quick, athletic and hard-punching super featherweight who simply loved to fight. In only her second pro fight she clashed with the great Lucia Rijker. It was a fierce firefight with both landing big blows and exciting those fans lucky enough to see it. Rijker won by knockout in the fifth round, but Hallback made her reputation for good in that fight.

The fact the fight with McCarter could possibly be televised added a few thousands bolts of electricity to the match up.

Most thought the fight would be a mismatch because Hallback had already defeated McCarter before. But the fans still arrived eager to see a female fight. The main event was a heavyweight named Lawrence Clay-Bey facing Imamu Mayfield. Also on the card was Allan Green and local area boxers Freddie Barrera and Ishwar Amador. All of the excitement that night was generated by the female contest.

McCarter, a very stylish technical fighter, was beginning to put the pieces together that would lead her to becoming the best female prizefighter today. Looking at her pro record at the time was misleading. But each time McCarter entered the boxing ring she added more and more to her repertoire.

ESPN had Joe Tessitore and Ted Atlas covering the fight. Both were well aware of the two girl’s earlier clash in 2002 and their respective talent. The crowd was pretty loud and supportive for each fighter.

“It was the co-main event which I believe was pretty unique on a televised boxing event. Even though the women’s’ bouts were usually the most popular with the fans, the networks did not want to show them,” said Miranda who along with Kallen helped Hallback get on three televised bouts.

In the first round Hallback and McCarter fired a few solo punches then the combinations came pouring in like a monsoon. Hallback swung hard and McCarter slipped and countered. There was no need to study each other. It was just a continuation of their first confrontation.

Back and forth the two women fought. The crowd was drawn into it from the very first exchange and they ooohed and awed every time someone connected solidly.

Hallback realized early that catching her foe with a power blow was going to be difficult so she switched targets sporadically by gunning for the body with right hands and occasionally taking a shot at the head. But even when she connected on top McCarter rolled or slipped the blow.

McCarter looked for the wide power shots coming in and returned fire with some clever counter shots in between Hallback’s combinations. It was heady stuff even for men. Both women were displaying skills that antagonists of women’s boxing professed did not exist in female prizefighting. But here it was and the crowd at Pala was energized. Those watching on television were pretty excited too.

Each female fighter had their moment. McCarter nearly floored Hallback in the second round with a perfect right cross. Hallback rained heavy blows on McCarter who was caught in the corner in the middle of the sixth round. The fight moved quickly even for two-minute rounds.

After 10 sizzling rounds the fight ended and went to the score cards. Hallback was judged the winner on all three cards by a surprising wide margin of 99-91, 98-92, 97-93. Many felt McCarter won the fight like ESPN analyst Atlas did, or had it very close. Both fighters hugged and there was no animosity at the end.

“My plan was to outbox her and I thought I had with counter punches and movement. Teddy Atlas had me winning a close decision. Unfortunately the judges did not,” said McCarter from Las Vegas. “However, in retrospect, I think I didn’t do enough.”

Hallback was unavailable for this story but her ex-manager remembers.

“Layla McCarter was just off her game slightly, and it was Chevelle’s night. After the event, the fans in the arena commented it was not only the fight of the night, but one of the best fights they had ever seen,” said Miranda.

McCarter, 36, is considered the best female fighter pound for pound today and has not lost a match since 2007. She was voted Fighter of the Year in 2015 by the Nevada Hall of Fame. McCarter has 55 pro bouts.