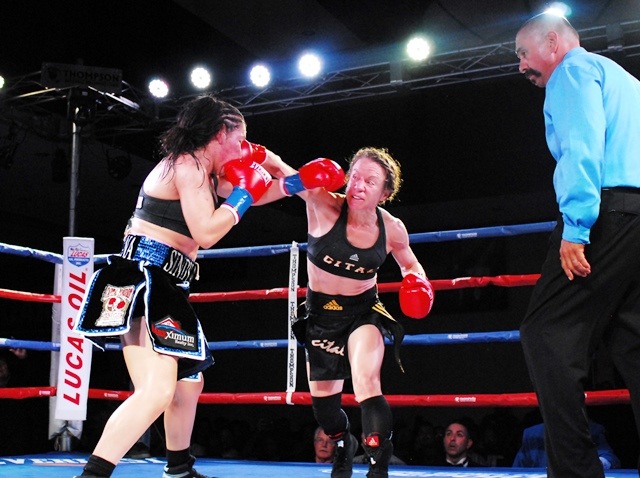 Jolene Blackshear vs Sindy Amador – In every fight, whether male or female, there are lessons to be learned.  The winner, the loser and even the audience walks away with something new they can use in the future.  It is certain the night of Friday, July 26th, 2013, at the Doubletree Hotel in Ontario, California, all those in attendance left with something.  The winner walked out of the ring with a new belt around her waist, while the loser with the first defeat of her career and the audience with the memories of a great fight.

Another lesson was also given that Friday:  fighters step into a ring to inflict as much bodily harm as possible on their opponent, but that doesn’t necessarily stop them from  respecting each other and forging a friendship after the battle has been waged.  That is exactly what happened between veteran Jolene Blackshear and Sindy Amador that Friday night.  That night changed the course of each one of their careers but also their lives and all because of what happened in 16 minutes of boxing.

Recognized as a tough and skillful competitor, Blackshear was in her fifth fight since taking a nine-year long hiatus from the sport when she stepped into the ring against Amador.  In fact, it was only her third fight since a shorter break of three years.  She was on an impressive win streak in those five fights with wins over current WBO flyweight champion Melissa McMorrow, Lili Barajas and Linda Soto. Her only setback was dropping a unanimous decision in South Korea to Dan Bi Kim in a very competitive fight.  Blackshear began her career back in ’95 going 4-2, 2KO, in the first stage as a pro.

“When I started boxing, I did a lot of research on the internet of active fighters,” said Amador explaining how she first heard of Blackshear.  “I saw her, she looked tough, very strong.  I read she had a lot of experience and would prepare herself very well for her fights.  We knew she was very strong and we got ready for that.”

At the time of the fight, Amador was the darling of the Southern California female boxing having amassed a record of 10-0, 1KO, with wins over the likes of the tough Mayela Perez, San Diego’s Amaris Quintana and veteran Carina Moreno.  With her youth and high-pressure action style, Amador was the favorite going into the title fight.

“I knew she was an aggressive fighter, a pressure fighter,” Blackshear, who lives in San Diego, CA, said recently of Amador.  “I had seen a couple of her fights, seen her pro debut, her first fight against Amaris Quintana, her fight against Carina Moreno.  I knew her skill wasn’t as good as mine, I knew I could out-box her.”

According to David Avila of the internet site thesweetscience.com, “Amador began the fight behind a good jab as Blackshear seemed to gauge what she had in front of her in the first round.  The busier Amador used a lot of head movement and moved around skillfully in the first two-minute round.”

With “La Alacrana”, as Amador was known inside the ring, in her first title fight of her career, the pressure was on her, “I felt intense pressure, being at home, undefeated and with this big opportunity.  You start having doubts about yourself, maybe I won’t be good enough, and I think in a way it got to me, I sabotaged myself.”

From his ringside seat, Avila reported for thesweetscience.com at the time, “Blackshear began catching Amador with a lead right hand that popped back the head of the hometown favorite.  Amador walked through them but right after right kept landing on the button. It became the theme of the fight.”

“This has been one of the fights I have felt the most calm,” Blackshear explained regarding executing her game plan.  “Everything was working but she kept coming so I knew I had to work hard.”

After a solid fifth round from Amador, the hard work began to pay off for the veteran Blackshear when in the later rounds she was able to send Amador to the canvas.  In the seventh Blackshear landed a hard right hand followed by an even harder left hook which dropped Amador on the seat of her trunks.  Amador beat the count and finished the round.  Knowing she possible was behind on the scorecards despite some competitive rounds, she came out aggressively in the eighth and final round.  She was met with another left hook from Blackshear that sent her down again.  There wasn’t much she could do after that with Blackshear seemingly getting stronger as the fight got older.

After eight rounds though, and Amador going down twice, the announcer delivered a split decision with two judges giving the fight and the interim WIBA 108lb title to Blackshear with scores of 76-74 each while a third judge gave it to Amador with another 76-74. Blackshear was surprised of the final verdict, “I was convinced I won that fight.  I said to myself, ‘not again, this happens to me all the time’, when I heard the announcer say split decision. I laughed and smiled in disbelief.  I prepared myself to not get the decision but I would have been surprised since I scored the two knockdowns.”

Fortunately the decision went to the right fighter.

“I learned a lot from that fight,” Amador says regarding her thoughts on the fight.  “You see who is with you after a loss, which friends and fans stay with you.  I promised myself I would come back stronger, to work harder and I was sure that better things would come and they did.  I was given the opportunity to fight for a world title against Amaris Quintana and I won.  With that I was able to get over that loss.”

Amador captured the vacant IFBA junior flyweight title in her following fight and defended it once against Maria Suarez.

For Amador the best part of the whole experience came after in a message from Blackshear.

“She contacted me afterwards and told me I was a great fighter and not to get discouraged. She told me she was sure I would become a world champion.  That really meant a lot to me and motivated me.  We kept in contact and we became good friends.”

“We had a great battle and I wanted to thank her for sharing this part of my life,” Blackshear explained.  “I always try to contact my opponents after the fight, to me it’s a sign of sportsmanship and respect and she displayed the same in return as well.”

Picture: courtesy of The Sweet Science