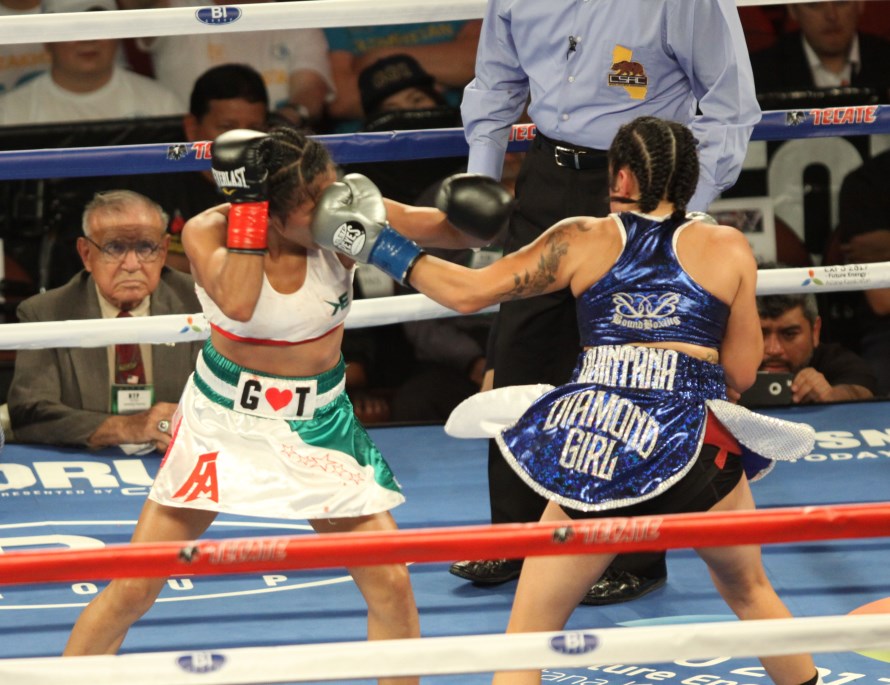 Five Landmark Dates in Women’s Prizefighting – A version of boxing has been around since time immemorial.  There is evidence of it in the Middle East Before Christ.  Records of actual prizefighting go back as far as the 16th century. But the boxing we recognize and know today, with its rules and weight divisions, began with the Marquis of Queensberry rules in in 1867.

It is believed females have boxed as long as the sport has existed but of course their participation as professionals has been outlawed for the majority of its existence.  An English woman by the name of Elizabeth Wilkinson Stokes is arguably considered the first female boxer.  It is known she fought from 1722 to 1728 and it is rumored she fought both genders in London.

The following are five important dates in the sport of female boxing, not necessarily only concentrating on fighters, but other participants as well.

In 1722 a bout between Elizabeth Wilkinson against Martha Jones was considered the first female boxing championship.  The bout took place at the Boarded House in London.  There aren’t many details of the bout, no word in what division it was contested or even if it happened inside a ring.  It is highly noted that neither fighter wore gloves.  It seems the only details that are known of the bout is that it lasted twenty-two minutes and that Wilkinson won.

In 1973, Carol Polis became the first woman to receive a license as a boxing judge when the the governor of Pennsylvania at that time Milton Shapp named her as a professional boxing judge. Two years after marrying her husband, a part-time referee, she cut her teeth at the legendary Blue Horizon in Philadelphia and throughout her career she judged twenty-seven title fights in nine countries including Japan, Italy, Argentina, Denmark and France.  She also had an appearance in the feature motion picture Rocky V.

At first she did not like the sport because of the violence but once her husband Bob Polis, now her ex, explained to her how to judge a fight, she began to gain some interest.  Once she received the state’s rulebook from the state commissioner, Polis began to judge fights about a year a later.

The first fight she judged was Earnie Shaver’s third round knockout win over Jimmy Young at the Spectrum in Philadelphia.

The craziest thing she has ever seen in a ring? After Loris Stecca’s jaw gets broken against Victor Callejas in Italy in 1985, Stecca’s mother jumps in and attacks Callejas with her shoe, “it was something to see.”

The distinction belongs to Eva Shain when she was one of the three judges for the Muhammad Ali vs Ernie Shavers WBC and WBA title fight in 1977.  Ali won it by a fifteen round unanimous decision.  She scores it 9-6 for Ali equaling the scores of the other two judges, Johnny LeBlanco and Tony Castellano.

Her start in boxing was similar to Polis’ when she joined her fight announcer husband Frank to the New York state Golden Gloves in the sixties.  A bookkeeper by trade, at first she was not sure but fell in love with the sport once she recognized the science behind it and began to attending fight cards regularly.  Soon thereafter she began to judge amateur bouts.

In 1975 she received her boxing judge license by the state of New York, one of the first females to do so.  She was asked to judge the title fight in 1977 only hours before.   She almost didn’t make since she was suffering from a cold and after a doctor’s visit that morning, she was advised to stay home.

She ended up judging around fifty title fights in the U.S., Canada and Europe.  Once asked by Muhammad Ali if she would be bothered to get blood on her blouse while judging, she quipped, “Well, it isn’t my blood!”

Legendary Barbara Buttrick is known for many firsts in female boxing.  The nearly five-foot 98-pound flyweight, Buttrick began fighting exhibitions in England and France in the early fifties.  In 1952 she came to America and became the female bantamweight champion by knockout.  Along with her opponent Phyllys Krueger, she became the first licensed female fighter in Texas in 1957 and in 1959 is believed to have fought in the first female fight in Florida.  She quit in 1960 to have her family.

In 1954 her fight against JoAnn Hagen from Indianapolis, Indiana, was the first to be broadcast on the new medium called television.  Buttrick was at a disadvantage in height, weight and reach but still was game despite going down in the fourth round.  It is widely regarded that her loss to Hagen is her only one as a professional.

First Female on the Cover of Ring Magazine

It was August of 1978 when Cathy Davis, 11-0, 11KO, welterweight graced the cover of the bible of boxing, Ring magazine, for a feature story entitled “Is Women’s Boxing Here to Stay?” The cover caused some controversy and many loyal readers cancelled their subscription to the magazine.  It didn’t help that some years later Davis was accused but never proven of having some of her fights rigged.  She retired after her last fight in 1981.

Not until January of this year did another women grace the cover of the most important publication in the sport when MMA star Ronda Rousey was featured in the magazine.  That was not met without some derision since she is not a boxer.  Only six other non-boxers have been on the cover of Ring Magazine, Senator James J, Walker, General Douglas MacArthur, General Dwight Eisenhower, Howard Cosell, Robert DeNiro and Don King.