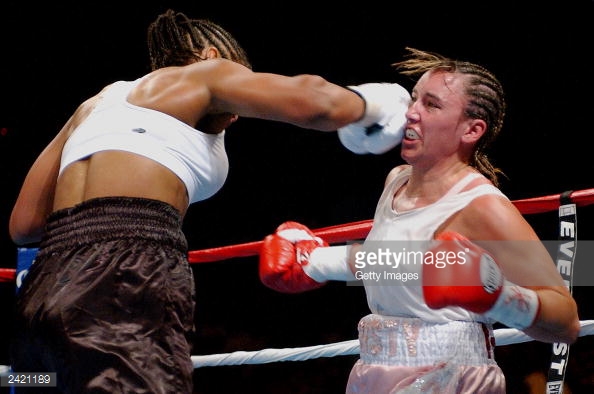 For those that follow female boxing, the “Coalminer’s Daughter” Christy Martin needs no introduction.  Arguably the first American female boxer to break through to the mainstream, Martin began boxing after participating in “tough women” contests in the late 80s.

After a shaky start including a loss in her first pro fight, Martin won a female junior welterweight title in 1993.  Martin defended her title various times and was featured on the Showtime channel in a war against Deirdre Gogarty, a fight that raised the profile of female boxing and Martin found herself soon thereafter on the cover of Sports Illustrated magazine.

On a cool Las Vegas evening, Martin stepped in the boxing ring to face Puerto Rico’s Belinda Laracuente in an eight round junior welterweight bout at Caesars Palace. It was March 3; the featured bout was Felix Trinidad challenging David Reid for the super welterweight world title. Fans got an unexpected surprise that night from the female fight.

Born in Connecticut, Laracuente moved to Puerto Rico at ten years old.  Two years later she was learning how to box along with her brother and soon the pair became some of the best amateurs of the island.  Martin had been a professional fighter for nearly ten years when Laracuente moved to Miami and went pro in early 1997.  By the time she faced the most famous female boxing of the day in Martin, “Brown Sugar” was 17-3-1 building her record with fights across the states and in Puerto Rico.

Controversy actually began three days prior to the fight at a public work out in Los Angeles for Christy Martin.  Germany’s Lucia Rijker, who was being mentioned as Martin’s next opponent, made an appearance and a ruckus erupted between Martin and Rijker.  After the short melee, Rijker ended up with a cut under an eye while Martin had a slight fracture on her foot and a couple of hurt fingers.

“I went to Don King and tried to pull out of the fight,” Christy Martin said via telephone from Las Vegas, Nevada.  “DK said I had to fight, Julio Cesar Chavez had pulled out and he said he needed me to fight.”

By the time they faced each other at the Caesar’s Palace outdoor stadium on the Showtime Pay-Per-View under card of Felix “Tito” Trinidad’s unanimous decision win over David Reid for the WBA super welterweight title, Martin was ten years Laracuente’s senior at thirty-one years of age.  Laracuente was taller and enjoyed a slight reach advantage.

“I was a little scared, she was legit.  She was the biggest thing in boxing back then,” said Laracuente, still living in Florida.  “I was young and cocky.  I was a go-getter.”

The scheduled eight round bout opened up the pay-per-view telecast.  The blueprint for the fight was laid out in the first round with the ever aggressive Martin coming forward while the more athletic Laracuente was backing up but catching the head-first “Coalminer’s Daughter” as she came in.  Martin knew it was going to be an up-hill battle against Laracuente’s movement stating prior to the fight that it would be “more like facing Camacho than Trinidad;” citing two of the island’s most popular fighters.

“Yes, box, always box.  I’m not a fighter, I have always been about not getting hit,” Laracuente said with a laugh over the cell phone regarding that Las Vegas night.  “I wanted to stay pretty like Ali said, so I always wanted not to get hit. I’m not a brawler.  I was fine with scoring a one, two, an uppercut and then getting the hell out of there.”

Martin had her moments, backing Laracuente against the ropes where she was able to throw many and land some wide looping hooks, but the Puerto Rican scored the quicker and better punches especially a quick laser-like lead right hand that rarely missed its mark.

“She had a perfect game plan, I don’t do well with movers and she moved very well,” Martin said.  “She probably had the best feet I had ever faced.”

By the third round Laracuente’s movement began to frustrate Martin and she began to react to it by mocking her and even scoring an illegal rabbit punch when Laracuente ducked out of the way.  Martin was so taken out of her game plan, she asked her corner if she had won a round yet after the third.

“If you can’t touch me, I can stay pretty,” Laracuente said regarding her strategy that night.  “I’ve never been hurt, never been cut, I knew she was tough but what can I do? I had to box.  I trained hard for that fight in Puerto Rico for a month and a half.”

As the fight got older Laracuente got brasher and would taunt Martin while landing some hard right hands that shook up Martin.  Martin was undeterred and kept moving forward attacking the body when she was able to slow down her opponent enough to get in close.

The action got tighter in the second half with Laracuente slowing down and Martin catching up to her early in the sixth forcing a heated exchange with the Puerto Rican’s back against the ropes.  Martin seemed to land the bigger punches during the exchange that got some fans out of their seats.

“The air in Vegas, I was getting tired and I felt I couldn’t catch my breath,” Laracuente, known as “Brown Sugar”, explained.  “I got these new boots.  I never broke them in at the gym.  I didn’t want them to get dirty.  So I wore them for the first time the night of the fight.  I got blisters and by the second half, my feet were hurting but I wasn’t going to start moving.  I didn’t want to get hurt or knocked out.  She hit pretty hard.”

From there on out it was mostly Martin while she pressured the clearly winded Laracuente while the Puerto Rican kept dancing around the ring but not at the same rhythm as the opening stanzas.

“I know my body attack got to her.  I haven’t watched the fight in a long time but I remember getting her against the ropes,” Martin recalled.  “She had frustrating style and styles make fights.  If we fought now or when I was twenty-two years old, her style would give me trouble.”

Controversially, two of the three judges saw a different fight than the attending crowd, the on-air commentators and boxing in general.  Judge Dave Moretti saw it an even 76-76 while Carol Castellano and Patricia Morse Jarman overruled him with scorecards of 77-75 each for Martin.

“After that fight, I lost respect for boxing.   I couldn’t believe I lost,” Laracuente said of the controversial decision.  “She didn’t beat me.  I lost respect for everybody in boxing, the judges, the refs, everybody.  I lost respect for Don King who was my promoter.  I was frustrated they wanted her to win.  To this day I see boxing as corrupt.  Money rules everything.  You can have a bad fighter but if they sell, they will find a way for them to win.”

Martin remembers the decision differently, “that was the best fight she ever fought but I clearly won the fight.  There is no question of that. She gave a great display of her boxing skills but it wasn’t enough.  I felt personally attacked with the boos but it was a mostly Puerto Rican crowd because of ‘Tito” Trinidad being in the main event.  Many athletes want to be liked, if there is a crowd of one thousand people and 999 are cheering and one is booing, I hear that one boo.  That stays with me. It was a tough situation.  I feel I fought the best Belinda Laracuente but she didn’t fight the best Christy Martin.”