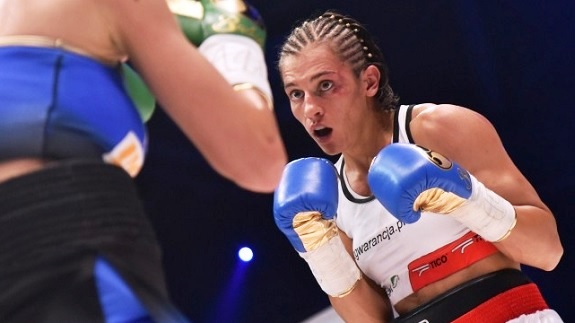 Piatkowska (10-1, 4 Kos), 32, moved up in weight to defeat Lopez (16-4-2) by unanimous decision after 10 rounds. She formerly held the WBC silver super lightweight title and the EBU welterweight titles.

“I would like to commend that again for the second time I was number one in the world according to statistical boxec portal – this time in a higher weight class,” said Piatkowska through social media on Sunday. “Thank you for the many kind words.”

No knockdowns were scored in the super welterweight clash. Piatkowska was able to control the fight over 10 rounds against Lopes who fights out of Massachusetts.

Lopes, 36, walked into the boxing ring with a six-fight winning streak but all took place in the U.S. where she now calls home. Her last loss took place in Sweden against Mikaela Lauren the current WBC welterweight titlist back in 2014.

Piatkowska could possibly vie for a match against Norway’s Cecilia Braekhus who holds all of the welterweight world titles.

On Friday Sept, 23, in Trelew, a super featherweight showdown features Lizbeth Crespo (10-3) versus Marisa Portillo (16-12-3) in a 10-round bout. Crespo, 25, and Portillo, 28, will be fighting for the vacant South American super featherweight title.

On Friday Sept. 23, in Santiago, a super bantamweight fight features Alys Sanchez (13-3-1) facing Guadalupe Maldonado (8-5) in a six round bout.

In Riohacha, a flyweight battle saw Olga Julio (24-16-1) knock out Endrimar Pirona (1-4) in the third round of their clash on Friday Sept. 16. Julio, 30, is a southpaw from Barranquila, Colombia and has fought six times for world titles with no luck. She now has won seven consecutive bouts since 2014.

On Friday Sept. 23, in Barranquilla, a flyweight contest features Olga Julio (24-16-1) back in the ring after only one week. She faces Basilia Mancilla (1-5-1) in an eight round bout.

A large female fight card take place in Tokyo, Japan on Wednesday Sept. 21. Leading off the women’s boxing slate will be WBO minimum weight world titlist Kumiko Ikehara (8-1-2) defending against Kayoko Ebata (9-6) in a 10-round bout. The champion Ikehara, 31, fights out of Kyoto, Japan and is making the fourth defense of the title she won in 2014. The challenger Ebata is 40 and fights out of Tokyo, Japan.

A total of nine female bouts is planned. Others on schedule are flyweights Ayako Minowa facing Thailand’s Petchpaya Mor Krungthepthonburi (0-2) in a six round bout. Plus, bantamweights Miyo Yoshida (4-0) and Yuki Ikemoto (1-0) clash in a four round bout. All fights take place at Korakuen Hall in Tokyo.

On Saturday Sept. 24, in Almaty, a super featherweight match features Firuza Sharipova (1-1) versus Sopio Putkaradze (13-7-3) in a four round bout.

On Saturday Sept. 24, in Cancun, a light flyweight contest features Lourdes “Lulu” Juarez (17-2) against Yesenia Gomez (13-4) in an eight round bout. Juarez, 29, is the younger sister of Mexican superstar Mariana “Barbie” Juarez. Gomez is a native of Cancun and will be fighting in her hometown against Mexico City’s Juarez.

On Saturday Sept. 24, in Porirua, a super featherweight bout showcases Rebecca Jennings (5-1) against Desiree Maaka (0-0) in a four round set.

In Managua, a battle of flyweights ended with Alejendra Soto (1-1-1) gaining her first win as a pro by decision over Jamileth Soto (0-1) after four rounds on Saturday Sept. 17.

On Saturday Sept. 24, in Kalisz, a lightweight clash features Ewa Brodnicka (10-0) facing Lela Terashvili (7-3-1) in an eight round bout. Brodnicka, 32, fights out of Warsaw, Poland. Terashvili lives and fights out of Gori, Georgia.

In Dar Es-Salaam, a middleweight scrap saw Hellen Nijau (1-0) win by knockout of Amina Mohammed (0-4) in the first round on Saturday Sept. 17. Also, Feriche Mashauri (1-0) defeated Husna Zamba (0-1) by decision after four rounds in a lightweight clash.