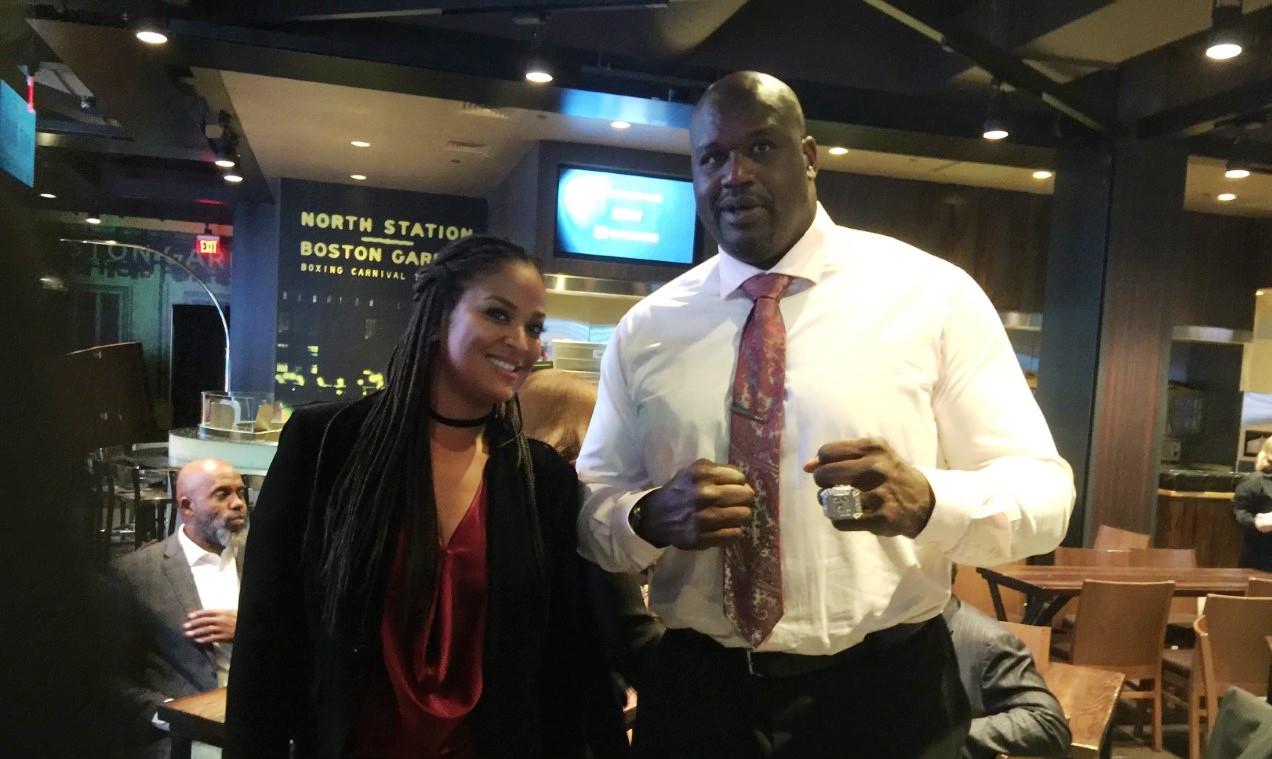 Dancing With The Stars In Boston: Laila Ali Floats Into The Tradition

Her final professional fight was won nearly a decade ago, in 2007.

The youngest of eight children born to the late great Muhammad Ali, Laila did something in the fight game that her famous father could not do. She retired undefeated with all of her faculties intact, perched on top of an unforgiving sport that she dominated as its flamboyant super middleweight and light heavyweight champion of the world for the majority of her nine year professional career.

And of course, even today at 38, she’s still very pretty.

The second generation Ali’s greatest triumphs in the prize ring included wins over female fighting pioneer Christy Martin as well as a “grudge match” victory over Jacqui Frazier-Lyde, the daughter of her father’s toughest rival, the late Smokin’ Joe Frazier. Long retired with a permanent unbeaten record of 24-0 and 21 knockouts, Laila now makes hers a life of family first. She and her athlete husband, former NFL wide receiver Curtis Conway, have two children; a five-year-old daughter and an eight-year-old son.

I asked Laila if an Ali comeback was possible.

But is there a future boxing champ or NFL wide receiver in her house?

“My son hasn’t shown an interest in boxing or in football yet so I’m glad for that. My daughter is very athletic but she’s still a Mama’s girl,” Ali told me. “But they are both definitely going to participate in sports,” she said proudly of her kids. But not boxing, right Mom?

“Hopefully not. I’m not encouraging that.”

As the years have passed and her involvement in the sweet science has reduced to spectator and TV commentator, Laila now watches from the sidelines as a new female boxing revolution attempts to get itself off the ground led by two-time American gold medalist Claressa Shields and Irish Olympic sensation Katie Taylor. Ali is “very impressed!” with both girls but understands that opportunities for females are depressingly limited. If women’s boxing is to return to its former glory such that it was when promoted by Don King on big time pay-per-view undercards in the 90s, it is young pros like Shields and Taylor who must pick up where Ali and Frazier left off.

“I love Claressa,” said Ali of her American countrywoman. “I think she’s amazing. Knowing her personally, I hope she takes her career wherever her heart desires.”

I asked Ali how far she thinks Shields and Taylor can go in professional boxing.

“Opportunities have to be created,” stressed Ali. “If a promoter gets behind them the same way they did in the UFC with Ronda Rousey, anything is possible,” she said. “There’s a lot of talent out there in women’s boxing but there is nobody behind them to promote them and that’s what it takes.”

While she and her family mourned the loss privately, the world was mourning in a very public way on television and on the internet. Much was written and said about the passing of Muhammad Ali on June 3, 2016 in Scottsdale, AZ. His was a network televised funeral fit for a departing King. Having lost my own mother last year to cancer, I can relate to mourning with close family, but surely not with the whole world on such a public stage. In a very real way, I felt like I too lost a father figure when Ali died. I’m sure others felt this way also. What an unfathomable experience that must’ve been for Ali’s daughter to have shared her father with the world in life — and in death.

“I don’t really know any other way,” she sighed as my personal inquiry trailed off. “The world mourns my father probably close to the same amount that I do because he was so loved by that many people. And I really mean that when I say that,” Ali assured me.

And so on the first Tuesday after Thanksgiving, six months removed from the death of her father, Laila was in Boston, Massachusetts for the very first time in her life at the new Garden with elder sister Maryum Ali by her side. The close-knit pair was in town for the 15th annual Tradition, a sort of regional sports Hall of Fame museum for beloved New England athletes and media members like Bob Lobel.

Planned and presented by Boston Sports Museum Director Rusty Sullivan, the annual Tradition raises money and awareness for good causes like the One Fund. Attendance this year set a new record and it was noted by host Tom Caron that the Tradition is now a Boston staple with “staying power.” Five years ago in 2011 at the 10th annual Tradition, Lowell, Mass boxer “Irish” Micky Ward was honored along with Celtics legend Larry Bird. The only other boxer to have been honored in the Tradition’s fifteen years of existence is Boston’s own Tony DeMarco. Rusty told me that his efforts to lure Marvelous Marvin Hagler back home from Italy for the Tradition have, as of yet, been unsuccessful. Sullivan is also author of the book Rocky Marciano: The Rock Of His Times, a definitive telling of Rocky’s story.

I asked Shaq about his fellow Tradition inductee.

“A beautiful lady. The best female boxer to ever grace it,” is how the 2016 NBA Hall of Famer gracefully described Laila to me. O’Neal also told me it was boxing and MMA training that helped him win his basketball championships and play ball “at a crazy high level.”

So what connection does Laila have to Beantown you ask?

Ali’s daughter never fought in New England and she does not live here.

Her father’s only professional fight in the New England area was his infamous 1965 sequel with Sonny Liston in Lewiston, Maine. The controversial heavyweight title bout produced arguably the most iconic sports photo of all time; Ali standing defiantly over Liston, shouting at him to get up and fight. Interestingly, Ali had his appendectomy performed at the old Boston City Hospital. This ill-timed medical delay actually led to the Liston rematch being contested in Maine and not in Boston at the old Garden as originally scheduled.

Then in 1977 during the twilight of his illustrious career, Ali fought six exhibition bouts in one day at the Hynes Auditorium in Boston. The once-in-a-lifetime event was appropriately billed “Muhammad Ali Day in Boston” and it caused quite a stir when Ali was reportedly late for the inaugural press conference. Tipping the scales far in excess of his ideal boxing weight, Ali confessed to the Boston Globe, “I wouldn’t fight a real fight at this weight.” Luckily, Ali’s six-pack exhibition opposition included a bartender and a used car salesman.

The Greatest ultimately went 6-0 in Boston against those wannabe Balboas.

“My daughter could whup these suckers,” Ali shouted in-between rounds.

Safe at home with mother Veronica Porché, Laila was but a baby.

The rest is boxing history.