Marcela Acuña Leads Back to Back Nights of Title Fights in Argentina
Written by: David A. Avila 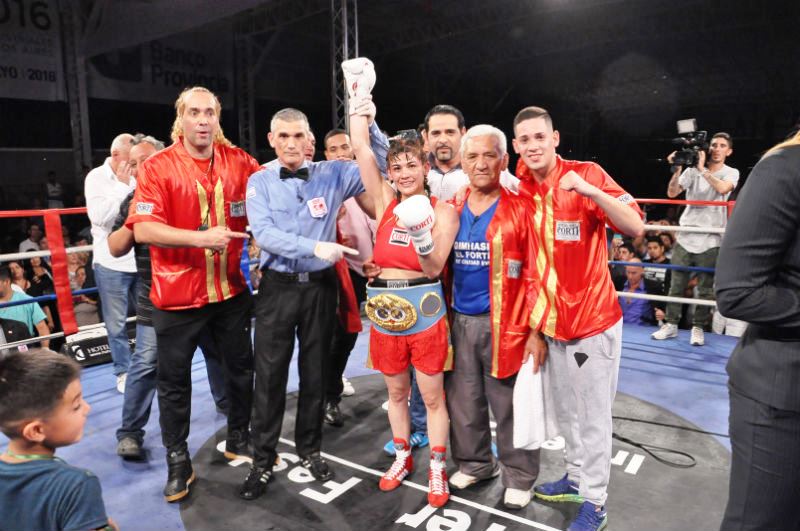 Acuña defends against O’Connell, Bermudez and Benavidez square off in rematch

Being the very first Argentine female fighter to hold a boxing license and still fighting at the age of 40 is not an impediment for the legendary Marcela Acuña to continue challenging herself to take her historic run to new heights, and she will attempt just that this coming Friday when she takes on Shannon ‘Shotgun’ O’Connell (15-4-1), a 34-year-old native of Brisbane, Australia, in Argentina’s C.E.D.E.M. No. 2 in the town of Caseros.

For Acuña, who trains in the adjacent gym along with fellow champions Erica Farias, Celeste Peralta and many others, the affair looms as a business-as-usual defense in her very backyard. But she will be facing a motivated opponent who, by taking this chance to grab Acuña’s IBF super bantamweight title in the champ’s home country, has forsaken a reported offer to fight in front of 50,000 fans in her own hometown as part of the undercard of the Manny Pacquiao-Jeff Horn WBO welterweight title bout on July 2.

O’Connell plans to make the most out of this challenge, and hopefully make Acuña pay for the missed opportunity.

“She’s very experienced, she’s been around forever, she fought everyone, it’s going to be a good experience, but I don’t believe she’s fought anyone like me,” said O’Connell in an interview with Argentine boxing website Boxeadoras Argentinas. “This will be my first title fight in my own weight division, because I stepped up before for a title fight but this time it will be different”.

The fight will be an intriguing matchup of boxer-punchers who always come in exceptional physical shape. Acuña (45-6-1, 19 KO) stopped the always tough former champ Yesica Marcos in her last bout, in an impressive performance against a battle-hardened former titlist who is 10 years younger than her.

Both fighters have similarly high stoppage ratios, and they both like to mix it up, so an early night is not entirely out of the question, although it is hard to make the case for an upset win for O’Connell, who will be facing the only Argentine fighter (male or female) to have held titles in all four major organizations during her career and who seems to be enjoying a new peak in her long an illustrious career. And the fact that the admission to the fight is free of charge should create the right environment for Acuña to celebrate once again in front of her people.

Earlier in the night, current Argentine super featherweight champ Brenda Carabajal (11-3-0, 8 KO) will be putting her title on the line against Gloria “India” Yancaqueo (3-8-2).

On Saturday, another great fight with two superb Argentine fighters will take place in the town of Arroyo Seco, where WBO super flyweight champ Daniel “Bonita” Bermudez (21-3-2, 6 Kos) will attempt her fourth defense of the belt against former national team member Paola Benavidez (7-2-1) in a rematch of their highly disputed eight-rounder back on May 7, 2016 won by Bermudez in a nontitle bout by a closer margin than what the already close score cards may insinuate.

The fight will take place only a few miles away from Bermudez’s hometown of Villa Gobernador Galvez, and the undercard will feature a four round bout between her sister, the talented Evelin “Princesita” Bermúdez (3-0-0, 1 KO), who will be facing debutant Marianela Ramírez in a super featherweight bout.

The Bermudez sisters are daughters and granddaughters of boxers, and they are construction workers by trade. They have recently built their own gym themselves with the help of their father and brothers.