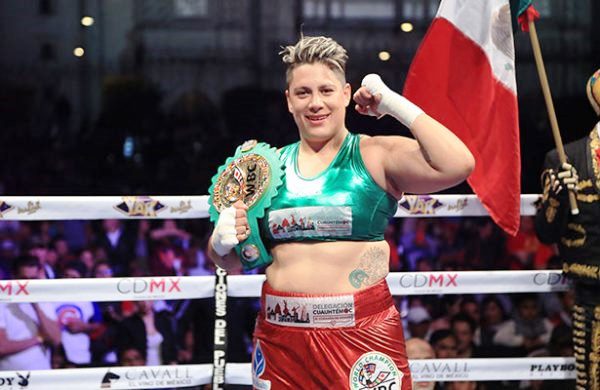 Traditionally the heavyweight division is the glamour weight class in boxing.  It is believed the way the division goes, so does boxing.  In female boxing, it is the other way around.  The heavier the fighter, the less attention she receives.

Unless your last name is Ali.

Twenty-nine-year old Alejandra “Tigre” Jimenez (8-0, 6KO) is trying to change that as she builds momentum in her home country of Mexico.

Jimenez, who captured the WBC heavyweight strap in March of last year in only her sixth fight as a pro, will be defending her title for the second time this Saturday night in Cancun, Mexico, against Canadian Vanessa Lepage Joanisse (3-0, 1KO).  The fight will headline a fight card televised in Mexico by the Televisa network.

It is impressive how far Jimenez has gotten in the sport in the little time she has been practicing it.  Since joining a boxing gym at the age of 23 to lose weight and winning 10 amateur fights against mostly men, Jimenez found herself facing Martha Salazar early last year for the WBC heavyweight title of the world.

Jimenez defeated Salazar, fighting out of San Francisco, CA, but originally from the Mexican state of Jalisco, via a majority decision with scores of 98-93, 96-94 and an even 95-95.  Jimenez reached the heavyweight mountain top even faster than Leon Spinks who in the late 70s defeated Muhammad Ali in his eighth fight to capture the WBC and WBA heavyweight titles.

Besides that historic feat, the fight was also the first in Mexico for the female heavyweight world title.

The 46-year-old Salazar turned out to be a formidable foe in the fight but after three rounds Jimenez was on top the judge’s scorecards with hard combinations punctuated with a precise counter uppercut.  Salazar won the fourth but by the fifth Jimenez was able to trap Salazar and unleashed a barrage of punches which Salazar did not hesitate to return in kind.

In the second half of the fight Jimenez’s left eye began to close but kept up her frenzied attack with Salazar right there with her.  The fight got tighter after six rounds with Salazar closing up the gap at least on one of the scorecards.

Both visibly tired, Salazar went for the knockout in the last couple of rounds but Salazar’s experience and skill took her to the last bell.

“It was a tough fight, I knew I was up against a fighter who was much more experienced than me,” Jimenez said after the fight.  “There were things I had to work on.  It was a great fight.”

After asking for the rematch and not getting it, plus a developing medical issue, Salazar retired with the Jimenez loss standing as her last fight.

Jimenez, a professional chef during the day, defended the title a year later this past April with a demolition of Carlette Ewell in the first round in her hometown of Mexico City in just under a minute.  A keep busy non-title fight was next two months later where Jimenez stopped the overmatched Martha Patricia Lara in two, also in Mexico City.

Now she faces Joanisse a former representative of the Canadian amateur boxing team with respectable international experience.  She opted not to wait for the next games set for Tokyo in 2020 and instead went pro.

“I’m excited, it is a great opportunity,” Joanisse said this earlier this week before she departed to Cancun.  “My whole team and I have worked very hard getting ready for the fight.  We are confident we will come back with the belt.”

She made her debut in March of last year; the day after Jimenez captured the title against Salazar, with a split decision win over Annie Mazerolle.  Two months later she fought Mazerolle again, this time improving on the win with a unanimous nod.  Her last fight was in December where she forced Maria Jose Velis not to come out of the last round of a four round contest.

Despite her amateur pedigree Joanisse seems to like to brawl more than box as she has been compared to the late great Arturo Gatti by some in Canada due to her fearless come-forward style.  The comparison was even stronger after her rematch with Mazerolle which at times resembled more a street fight than a boxing match.  “She was starting to fall in the last round.  Her knees buckled but it wasn’t enough.  Against Jimenez I can’t go crazy like my other fights.  That is for sure.”

“We have adjusted my training for this challenge,” Joanisse explained.  “I have been sparring ten rounds at a time and then hitting the heavy bag.  I have been training for more than two hours a day.”

Joanisse and her team feel they have to take Jimenez into deep waters and mentioned the more rounds she sparred, the more energized she looked.  They feel if they can get past the first three or four rounds, Jimenez will tire out.  The team feels Joanisse’s young is an advantage since many of Jimenez’s opponents have been in their forties.

“I have nothing to lose in taking this fight,” Joanisse said recently.  “I don’t have a promotor.  I am only 22 years old. I watched some videos of her.  I am going into the fight telling myself I have a chance.  It’s all on her since she is defending her title.  Not on me.”

Also on the card at the Oasis Arena in Cancun presented by Promociones del Pueblo in association with Cancun Boxing is former WBC International super middleweight champion Maricela “La Diva” Cornejo (7-2, 2KO) of Los Angeles, CA, in a six rounder against Mexico’s Vanessa Rodriquez (0-1-1).  It marks the second time Cornejo, who last year challenged for the WBC middleweight title against Kali Reis, fights in Cancun.  In December of last year Cornejo scored a unanimous decision over Martha Lara over six rounds.

Rodriquez has faced the same fighter, Erika Hernandez, twice in her career.  The first time was July of 2015 when they fought to a draw and in February with Hernandez scoring a six round unanimous decision.

The number 3 ranked Cornejo was expected to challenge Adler first for the green and gold belt since Shields was campaigning at 160 pounds but unexpectedly was looked over when Shields was given the opportunity.

A win this Saturday night by Cornejo should absolutely guarantee a title opportunity against the new champion Shields. Perhaps the fight should occur by later this year or early 2018.

Cornejo’s original opponent pulled out with an injury. The new opponent was found to keep Cornejo busy.