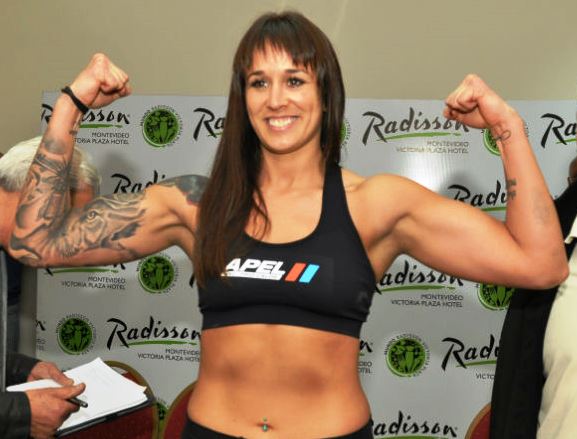 It took her a little over ten years to get it done, but finally Uruguay’s most beloved female fighter achieved her dream of becoming a world champion when Chris Namus defeated Esther Reynoso over ten one-sided rounds to lift the vacant IBF super welterweight title in front of her loyal fans in Montevideo’s Palacio Peñarol on Saturday night.

Namus (23-4-0, 8 KO) was among a pioneering class of female fighters in the River Plate basin along with her Argentine counterparts. But unlike her foes and colleagues across the widest river in the world, Namus was not as lucky in the championship department, having tried and failed in four separate occasions, including an interim title bout very early in her career, two back-to-back failed tries against Fernanda Alegre in Argentina, and a brave challenge against possible pound-for-pound queen Cecilia Braekhus in Germany in 2016.

But the time was right for Namus to finally win a belt in this occasion against the overachieving Reynoso (8-2-3, 7 KO), a very limited fighter who got her chance after beating Cristina Cuevas in a horrendous decision to lift the Argentine belt and the championship opportunity with it, in spite of having far less than the minimum 15 bouts required by the Argentine Boxing Federation to fight for a title.

Namus, 29, displayed great footwork and ring control during the bout, controlling the tempo of the bout and landing with accuracy and power from the long range, using her great height and reach advantages. Reynoso simply didn’t have any answers for Namus’ controlled aggression, continuously chasing the local fighter around and trying to land a bomb that never came. Reynoso managed to impress a little bit more in the sixth round, but her effort was drowned in the rain of punches that followed.

In the end, Namus was the clear winner by scores of 100-89, 99-90 and 98-91, taking the title in the same stadium in which she made her debut and had her first championship bout back in 2009 against Lely Florez.

Previously, Argentine boxing pioneer and longtime champ Yesica Bopp defended her mini-flyweight title for the 18th time (combining the WBA and WBO versions that she has alternately held since 2009) with a unanimous decision win over a feisty but overmatched Olga Julio, from Colombia.

Looking strangely emaciated and pale, Bopp (32-1-0, 13 KO) was nevertheless her usual aggressive self, throwing punches in bunches from bell to bell and landing  at will in this rematch of sorts against Julio (25-16-2, 18 KO), whom she had already beaten in 2011 in a WBO title defense.

The Colombian southpaw challenger seemed willing to take risks and was in great shape, but she was nevertheless no match for the near-perfect performance that Bopp showed her, and which the diminutive and explosive Argentine fighter has already turned into her custom.

Bopp simply ran over Julio in every aspect of the fight, and a spirited outburst in the ninth round, borne more out of frustration and despair than willingness to turn the tables around, was Julio’s only solid moment during a fight that Bopp controlled at her own will.

The scorecards gave Bopp a unanimous decision by scores of 100-90 across the board, a result that puts Bopp, at the age of 33-years old, in the urgent need of cashing in on her efforts, which started 17 years ago when she took part in the very first amateur fight in Argentine history.

A new, long-overdue reshuffling of the Argentine boxing business landscape (a mysterious land in which the local Federation acts as co-promoter and supplier of televised fights for the local networks, among other irregularities) could allow or even force Bopp and other fighters to take more risks and make more competitive fights in the near future.

If anyone is ready for that moment, that’s the legendary “Tuti.”