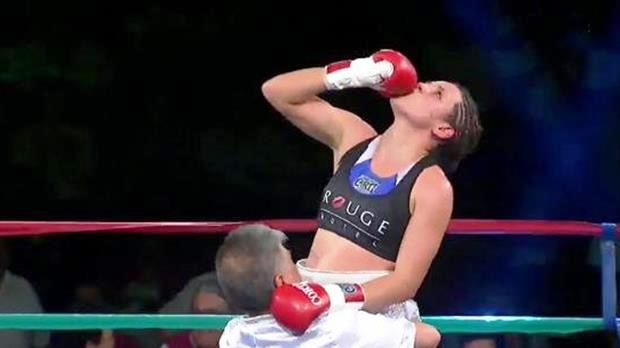 In a heated fight that felt very much like a graduation night for the young challenger, Daniela Bermudez defeated multiple champion Marcela Acuña over ten intense rounds at the local Polideportivo Municipal de Hurlingham this past Friday, April 13 to lift Acuña’s IBF super bantamweight belt as well as the vacant WBO version of the same title.

A war was expected. The veteran fighter would take control of the spaces and tempo in the ring and survive the onslaught of her younger opponent. At least that’s what the preview indicated. But in the end, it became a disputed but ceremonial passing of the torch from the pioneer of Argentine female boxing to an opponent 13 years younger, in a changing, emotional bout.

In several passages, Acuña tried to cool down the pace of the bout, trying to slow down the action in order to gain control while Bermudez seemed determined to earn the win by preponderance of action and aggression.

Acuña (46-7-1, 19 KO) took the early rounds with her better boxing skills and by keeping a safe distance, but there were no “study rounds” as both combatants charged towards each other from the first bell. But as soon as Bermudez (23-3-3, KO) started applying a more intense pressure from the fourth round on, Acuña seemed to have no answer for it, and became engulfed in a whirlwind of punches that lasted throughout the bout.

Acuña, 41-years old, would refuse to budge anyway, and a furious comeback in the eight allowed her to carry that round clearly but closely. But Bermudez, 28, imposed her youth and better stamina towards the end, connecting with more pressure down the stretch to lift a clear victory that puts her in the pound-for-pound map in female boxing worldwide.

The scorecards favored Bermudez by tallies of 98-92, 97-93 and 96-94, with the latter being the most accepted one among ringside observers, and all of them for the native of Rosario, now a champion in three divisions, adding this title to her super flyweight and bantamweight championships after failing to grab the minimum weight crown against Yesica Bopp.

The bout left little room for controversy, but its action was attractive enough to open the door for an immediate rematch, as clamored by press and fans alike and echoed by the loser.

“Unfortunately, I feel very sad, I was once again the victim of a controversial ruling”, said Acuña in a social media statement after storming out of the ring in discontent once the result was announced. “But I feel at peace knowing that I left everything in the ring. I only need to thank all of those who accompany me all the time, especially my team, family, friends and those who made this fight possible. My congratulations to Daniela and her team. The only way is forward. I will seek my revenge.”

Acuña, a native of the northern province of Misiones, still owns license 001 as the first-ever female fighter in Argentina, and made her first two fights against two legends such as Christy Martin and Lucia Rijker.

Previously, Jujuy native and Acuña protégé Brenda Karen “Pumita” Carabajal (14-4-1, 9 KO) settled an old score against Gloria “India” Yancaqueo (5-10-3, 2 KO), winning by an inexplicable split decision after Yancaqueo was deducted two points for low blows and was dominated throughout the bout. The pair had fought to a draw in June of 2017.